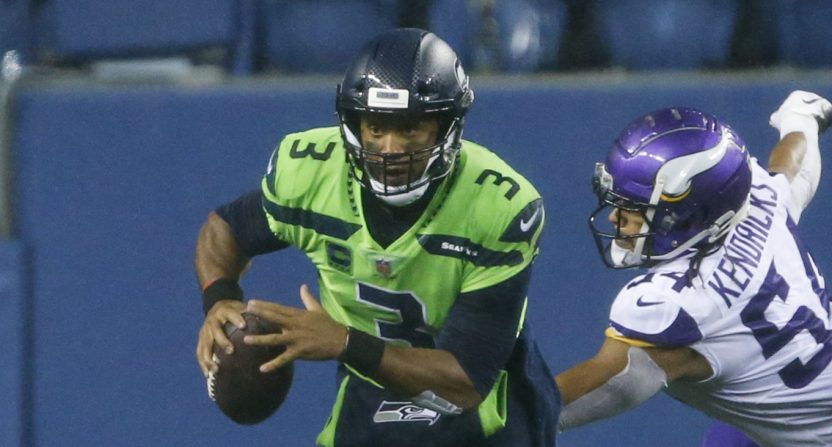 The 2020 NFL regular season is just 36 percent complete, but we’re monitoring the league’s top MVP candidates. Here’s a look at the 10 players best aligned for MVP runs based on the first six weeks of the 2020 campaign.

10. New Orleans Saints QB Alvin Kamara: He’s averaging a league-high 135.2 scrimmage yards per game and has already scored seven touchdowns for the Saints, who remain a contender despite a rocky start elsewhere.

9. Los Angeles Rams DL Aaron Donald: The league’s sack leader with 7.5 in five games, Donald is in the mix for his third Defensive Player of the Year award. There’s no way the Rams are 4-2 without him.

8. Cleveland Browns edge Myles Garrett: Garrett has almost singlehandedly carried the Browns defense and is the main reason they’re 4-2. He’s the only player in football with seven sacks and three forced fumbles.

7. Tennessee Titans RB Derrick Henry: The reigning rushing champion carried the Titans over the Houston Texans in Week 6. He leads the NFL with 588 rushing yards, and his team is a perfect 5-0.

6. Tennessee Titans QB Ryan Tannehill: Meanwhile, Henry’s quarterback has completed 22-of-26 passes in the red zone, with 12 touchdowns and zero interceptions under those circumstances. He’s the league’s third-highest-rated passer.

5. Pittsburgh Steelers QB Ben Roethlisberger: Big Ben has completed nearly 70 percent of his passes and has thrown 11 touchdowns to just one interception for a 5-0 Pittsburgh team.

4. Green Bay Packers QB Aaron Rodgers: It all hit the fan in Week 6, but that doesn’t change the fact the two-time MVP has the league’s fourth-highest QBR for a one-loss squad that has been far from healthy. He remains in the top tier for now.

2. Kansas City Chiefs QB Patrick Mahomes: That’s now 15 touchdowns to one interception for the 2018 MVP, and the Chiefs continue to look like the Super Bowl favorite.

1. Seattle Seahawks QB Russell Wilson: A bye week didn’t change the fact Wilson is on pace to post the highest passer rating in NFL history, and the Seahawks of course remain unbeaten. For now, this is a no-brainer.