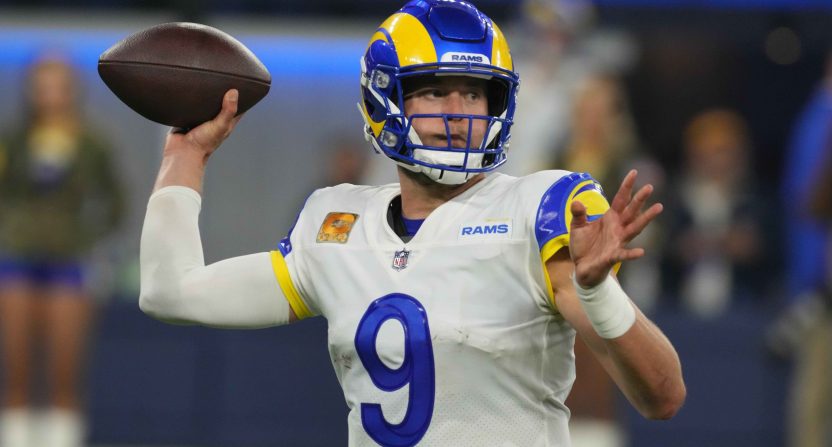 The 2021 NFL regular season is just 50 percent complete, but it’s never too early to monitor the league’s top MVP candidates. Here’s a look at the 10 players best aligned for MVP runs based on the first nine weeks of the campaign.

2. Tampa Bay Buccaneers QB Tom Brady: Amazingly, he isn’t losing ground coming off a bad performance of his own leading into a bye, mainly because everybody else on this list is tanking. He has a 25-to-5 touchdown-to-interception ratio for a 6-2 contender.

3. Green Bay Packers QB Aaron Rodgers: The reigning MVP actually moves up despite missing Week 9 due to COVID-19. He still has a 17-to-1 touchdown-to-interception ratio since Week 2.

4. Los Angeles Chargers QB Justin Herbert: The Week 9 AFC Offensive Player of the Week is right there now. He has a league-high 124.8 passer rating on deep balls for a Super Bowl contender.

5. Baltimore Ravens QB Lamar Jackson: The league’s top dual threat (maybe ever?) is killing it and often carrying a 6-2 team. His rate-based passing numbers just aren’t quite there.

6. Arizona Cardinals QB Kyler Murray: The league’s second-highest-rated passer is quarterbacking the team with the league’s best record, but what does it say that the Cards won handily without him in Week 9?

7. Las Vegas Raiders QB Derek Carr: Carr’s been crushing it all year on deep and big-time throws for a team that continues to contend for a divisional crown. He just struggled mightily in a loss to an inferior team in Week 9.

8. Dallas Cowboys QB Dak Prescott: He bombed coming off an injury in Week 9, but the 28-year-old remains the league’s third-highest-rated passer for a 6-2 team.

9. Buffalo Bills QB Josh Allen: He’s had too many duds to earn strong consideration thus far, but Allen’s overall production for a division leader has him in the mix entering the second half of the season.

10. Dallas Cowboys CB Trevon Diggs: He remains on pace for an NFL-record 15 interceptions, and he therefore remains on this list.