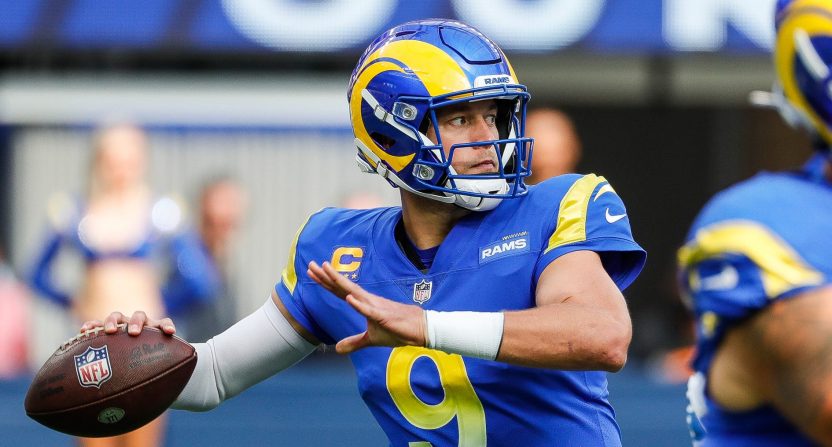 The 2021 NFL regular season is just 55 percent complete, but it’s never too early to monitor the league’s top MVP candidates. Here’s a look at the 10 players best aligned for MVP runs based on the first 10 weeks of the campaign.

1. Dallas Cowboys QB Dak Prescott: How crazy has this season been? Prescott just jumped seven freakin’ spots based on one strong performance. It helps when everyone bombs around you, but the fact is he’s the league’s top-rated passer, and his team is a solid 7-2.

2. Los Angeles Rams QB Matthew Stafford: Back-to-back messy performances in losing efforts has Stafford in big trouble, but he still has the league’s top QBR for a 7-3 team.

3. Tampa Bay Buccaneers QB Tom Brady: Four interceptions in back-to-back losses has Brady in trouble as well, but he’s the league’s DYAR leader for a 6-3 squad.

4. Buffalo Bills QB Josh Allen: He ranks near the top of the league in big-time throws as the leader of a Super Bowl contender with the NFL’s second-rated scoring offense. Inconsistency has been an issue, but that’s plaguing just about everyone on this list.

5. Arizona Cardinals QB Kyler Murray: The league’s second-highest-rated passer is quarterbacking the team with the league’s best record, but he’s been out two weeks in a row.

6. Green Bay Packers QB Aaron Rodgers: The Packers have a solid shot at the top seed in the NFC and Rodgers is one of the league’s best passers. His numbers aren’t MVP-caliber right now, but those facts remain a factor.

7. Minnesota Vikings QB Kirk Cousins: The Vikings might have a losing record, but Cousins’ 18-to-2 touchdown-to-interception ratio has him in the picture. He has the top PFF passing grade as well.

8. Kansas City Chiefs QB Patrick Mahomes: The numbers aren’t there, but you can’t count him out after that big performance in Week 10.

9. Dallas Cowboys CB Trevon Diggs: He remains on pace for an NFL-record 15 interceptions, and he therefore remains on this list.

10. Cleveland Browns edge Myles Garrett: He’s on pace for 22 sacks, which means he has a shot at the single-season record of 22.5. That gets him a spot here.