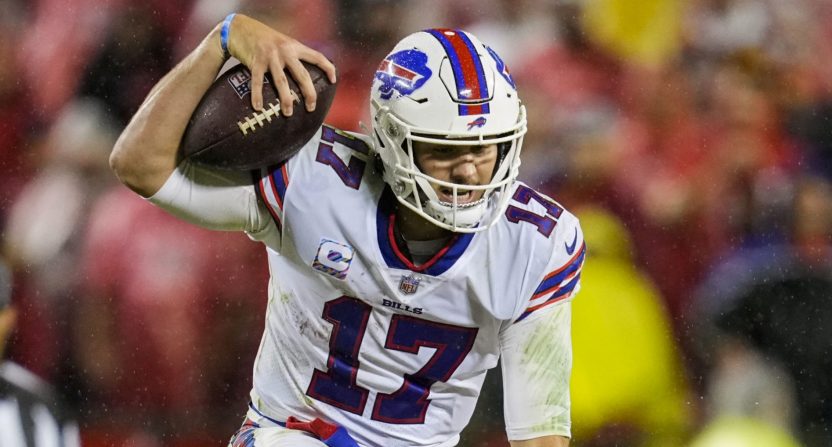 The 2021 NFL regular season is just 29.4 percent complete, but we’re already monitoring the league’s top MVP candidates. Here’s a look at the 10 players best aligned for MVP runs based on the first five weeks of the campaign.

1. Arizona Cardinals QB Myler Murray: The Cardinals are the NFL’s only 5-0 team and Murray’s numbers rank near the top of the league pretty much right across the board. There hasn’t been a remotely off week. The 24-year-old has been consistently awesome.

2. Buffalo Bills QB Josh Allen: The high-flying dominant Bills have the highest-scoring offense in the NFL thanks mainly to Allen, who has 14 passing/rushing touchdowns to two interceptions and was heroic in a statement Week 5 win over the Kansas City Chiefs.

3. Tampa Bay Buccaneers QB Tom Brady: The Bucs are tearing it up again and Brady has 15 touchdown passes to go along with zero turnover-worthy plays. He’s absolutely in contention here at age 44.

4. Baltimore Ravens QB Lamar Jackson: The league’s best dual-threat quarterback also took down Patrick Mahomes and the Chiefs in a trademark moment, but he’s been phenomenal beyond that as well for a 4-1 Baltimore team.

5. Dallas Cowboys QB Dak Prescott: Dallas is 4-1 and Prescott is the league’s highest-rated qualified/healthy passer now that Russell Wilson is hurt. This is a hell of a race.

6. Los Angeles Rams QB Matthew Stafford: The rejuvenated veteran leads the NFC with a 74.8 QBR for a 4-1 team.

7. Los Angeles Chargers QB Justin Herbert: The league’s highest-rated passer on deep attempts has the broad and advanced numbers as a prime MVP candidate for a 4-1 team.

8. Kansas City Chiefs QB Patrick Mahomes: No way you can count him out with a league-high 15 touchdown passes and the top QBR in football. The Chiefs have to get out of this rut though.

9. Dallas Cowboys CB Trevon Diggs: With six interceptions in five games, the sophomore is on pace to shatter the single-season NFL record of 14. That’s unlikely, but the pace gets him a spot on here for now.

10. Cleveland Browns edge Myles Garrett: With seven sacks in five games, Garrett is on pace to set a new single-season NFL record with 24. Same logic as with Diggs.