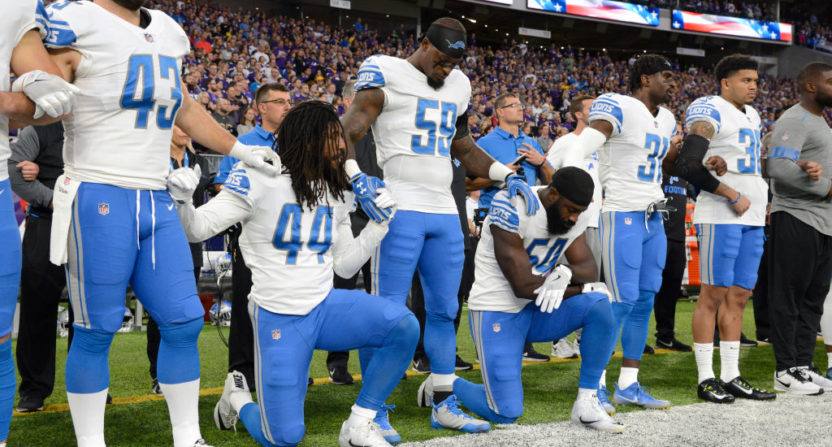 When looking to American cinema for examples of philosophical teachings that make their mark, you don’t see too many people look in Kevin Smith’s general direction. His 1999 film Dogma contains a multitude of conversations about Christianity and religion that don’t really add up to what was intended, but there is one exchange that has stuck with me over the years. In it, Rufus (Chris Rock), the forgotten 13th apostle, is explaining to Bethany (Linda Fiorentino) how Jesus Christ really felt about humanity.

Rufus: …his only real beef with mankind is the shit that gets carried out His name. Wars. Bigotry. Televangelism. The big one though, is the factioning of the religions. He said, “Mankind got it all wrong by takin’ a good idea and building a belief structure out of it.”

Bethany: So you’re saying that having beliefs is a bad thing?

Rufus: I just think it’s better to have an idea. You can change an idea; changing a belief is trickier. People die for it, people kill for it…

Perhaps it’s been said more elegantly but that’s a notion that always made a lot of sense. When you construct a firm belief, be it in a god or a person or an object, it becomes something bigger than that. It becomes something that doesn’t just have meaning, but has all the meaning.

Such is the power of symbols. They might start out as a representation or shorthand for something bigger, but when we feed them too often, they become so powerful that the original intention no longer matters.

That’s what I’ve been coming back to a lot ever since Donald Trump figured out how to use the NFL’s protest to his advantage. In my mind, there’s one thing that would help him more than anything and that’s a war. In lieu of that (thankfully, for the time being), the next best thing for him is to drive a wedge between Americans. While we’re doing a pretty good job of it on our own, he knows enough to know that one side of the discussion has some very strong beliefs when it comes to what America means and, more importantly, what America’s symbols mean.

Americans really like their flag. And because so many of them have spent most, if not all, of their lives in America, they don’t realize that Americans like their flag more than most other countries like their flag. To put it more clearly, we’re obsessed with our flag. Walk along a beach lined with houses in America and you’re likely to see the Stars and Stripes waving atop a flagpole at almost every single one. Now go to England or Canada or Australia. You’ll see flags as you walk down a residential street, but not nearly as many. That’s not to say they’re less patriotic about their countries, it’s just that the symbolism that Americans have put into their flag is far stronger than what most people do elsewhere.

All of which is to say that the ongoing debate over the national anthem protests and how it related to “respecting the flag” shouldn’t be a surprise to anyone in America. Especially because it’s intertwined with the world of sports, which has always distilled our need to make symbols important more than any other facet of life.

Along with politics and religion, sports complete the holy trinity of American symbol epicenters.

What would our sports culture be without complete and total loyalty to symbols? Pro franchises and college programs are extremely good at harnessing the power of their logos, defining them so specifically in order to make sure you pledge allegiance to it over the players in the uniforms. Players come and go, the logos remain in perpetuity (or until they’re updated). That structured sense of being bleeds into the uniforms, the nicknames, and even the stadiums. You don’t just wear a New York Yankees uniform, you don “the pinstripes” and all of the storied histories that come with them. Miami Hurricanes fans throw up The U and you know exactly the kind of swagger that’s supposed to represent, regardless of how good the team is right now. Besmirch the good name of Ohio State or Clemson or USC and someone is liable to lay into you over your lack of understanding about what it means to be a Buckeye, Tiger, or Trojan.

There’s no better example of this than the Washington Redskins. On paper, there is absolutely no reason there should be a professional sports franchise in the year 2017 that refers to itself as a slur to denigrate a collection of people, let alone a people who were decimated and treated as poorly as Native Americans. If you imagined for a moment that the team didn’t exist and someone decided to start an NFL franchise in Washington, DC right now, the chances they would suggest Redskins as a potential name for the team would be zero. It fails every test that we could throw at it in terms of cultural sensitivity, advertiser friendliness, and good taste.

And yet.. .the franchise name seems to have survived the latest backlash against it and will continue to be something that fans wear proudly on their shirts and jackets. How? Why? Because over the course of 85 years, the team and the league it plays for have defined the name and the logo as something bigger than a derogatory word. The Redskins are one of the storied franchises of the NFL and to be a fan is to be part of a club that honors tradition and upholds a proud history. And when people push back against the notion of the name or the logo, they’re pushing back against that history and tradition. They’re seemingly trying to invalidate the pride that you take in being a Washington Redskins supporter. They’re telling you that you’re wrong for being loyal to the symbol you’ve pledged allegiance to.

And so, that’s the environment that we find ourselves in. A place already steeped in symbol worship in which a protest asks us to rethink the ultimate American symbol, the American flag. For many, that flag is an unimpeachable symbol of freedom, liberty, military success, and American exceptionalism. To question any of that for even a second is to question everything they believe, their parents believed, and their community believes. Nuance and truth stopped mattering long ago, the symbol is set in stone.

So when NFL players started kneeling during the national anthem and Trump positioned it as an attack on the biggest symbol there is during one of the most symbolic events we have in this country, that’s how we end up with the scene in Baltimore this past weekend.

Before the game between the Pittsburgh Steelers and Baltimore Ravens, an announcement went out asking fans to join Ravens players in prayer before the playing of the national anthem in order to embrace “kindness, unity, equality, and justice for all Americans.” Even though this had nothing to do with the national anthem or the American flag, those same fans started booing as soon as players took a knee during the prayer. Mind you, Baltimore players were kneeling in order to pray for basic human understanding, completely separate from any protest.

And fans booed them.

A chorus of NFL fans literally booed a prayer. And they did it because of their belief in symbols — the flag, the anthem, the NFL — was so strong, it overpowered any notion of what was actually being said or done. That’s how well trained they are to respect symbols over real life.

The truth is, the NFL anthem protests are likely doomed to their fate at this point. At least in their current form. Decisions have been made about what offenses have been committed and there’s no leeway. They’re wrong. End of story. Next question. Perhaps the protest will evolve as it tries to recapture the original point of shining a light on police brutality and racial inequality. Maybe that’s what needed to happen. Because hearts and minds have already hardened around their beliefs in defense of their precious symbols. And like Rufus said, changing a belief can be downright impossible.