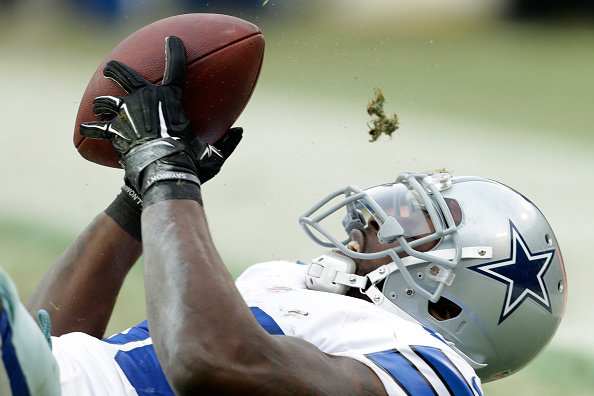 One of the most puzzling and controversial aspects of the NFL rulebook for the past few seasons has been what actually constitutes a catch. There have been many examples of what appeared to be catches, only to see it taken away for the old “football move” part of the catch rule.

What exactly constitutes a “football move” was largely left up to interpretation by officials on the field, but that apparently is changing in 2016.

Keep this passage handy from the 2016 NFL rule book. It's the updated version of the… https://t.co/X1N6ZMpXtK pic.twitter.com/K2HTALwVsh

For those who can’t see the tiny writing above, here’s a good look at what the language says:

To become a runner in 2016, a receiver must have possession after his second foot hits the ground, and at that point he must be “capable of avoiding or warding off impending contact of an opponent, tucking the ball away, turning up field, or taking additional steps.”

This is what came of the vaunted blue-ribbon panel created by commissioner Roger Goodell late last year? Well then, slow-claps for everyone.

No longer are the words “football move” seen in the rule, and the hope was to create a more transparent and less subjective rule overall. That hope wasn’t met with reality though, as there is still plenty of gray area when it comes to what exactly language like “being capable of avoiding or warding off impending contact” really is or “the ability to take additional steps” constitutes.

All those things are open for interpretation and the referees’ discretion in 2016, just as they were last season and the years before that.

With nearly a whole year to study the issue at hand, coming up with this from a group whose sole purpose was to eliminate confusion is nothing short of mind-boggling bad. It certainly isn’t easier for the fan, let alone the officials to understand — you know, the stated goal of the blue-ribbon panel in the first place.

Perhaps this is a rule that just simply doesn’t have an easy way of being written down, and it may also just be that what a catch actually is is more easily defined by seeing it in practice than on a piece of paper.

It will certainly be interesting to see how this all plays out throughout training camp and preseason contests across the league this August.