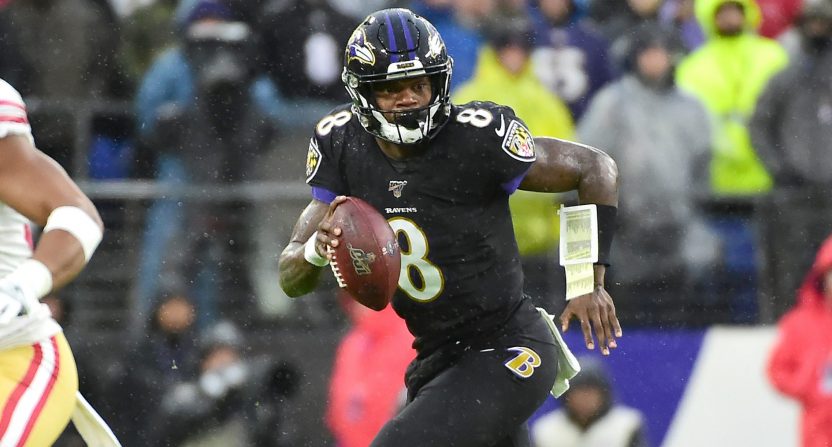 With the 2019 NFL season exactly 75 percent complete, the races for individual awards have become intense.

A lot could change between now and Dec. 29 when the regular season ends, but here’s a breakdown of who leads who entering Week 14.

Russell Wilson of the Seattle Seahawks was the mid-season frontrunner here, but Wilson hasn’t been as effective in recent weeks while Jackson has completely taken off. He’s simultaneously the NFL’s fourth-highest-rated passser and ninth-leading rusher, and he’s generated a total of 32 touchdowns. That leads the league by a mile. At this point it would be surprising if he didn’t become the youngest MVP in league history.

He’s thrown a league-best 26 touchdown passes for a team that doesn’t look Super Bowl-caliber on paper. A hot late-season run could give him a chance to leapfrog the still-raw Jackson.

If you’re an offensive player who is good enough to win MVP, you should usually be the OPOY. And even if you want to look more at production than “value,” this is a no-brainer. The Ravens don’t punt anymore. And now that Christian McCaffrey has had his productivity dip in recent weeks, it doesn’t look as though anybody is going to make a run at this thing by breaking a major record.

We’ll still list McCaffrey, though, because it’s not completely out of the realm of possibility for him to compile 699 scrimmage yards in Carolina’s final four games. That’d give him the single-season record in that category. Still, that’s very unlikely.

Stephon Gilmore, Chandler Jones, T.J. Watt, Aaron Donald, Joey Bosa, and Nick Bosa are all strong candidates in what’s shaping up to be a competitive race. That said, Barrett leads the league all on his own in both sacks (14.5) and forced fumbles (six). If he can hit the 20-sack mark, he can’t be denied.

There were a lot of ways we could go with this, especially because you can’t count out still-dominant reigning DPOY Aaron Donald. But Gilmore has really kept the Patriots glued together. He’s the best cover man in the league by a hell of a margin, and New England has been making history on defense.

It hasn’t been a good year for offensive rookies, with all three first-round quarterbacks struggling and D.K. Metcalf and Terry McLaurin not doing quite enough as receivers to gain consideration. But Jacobs has exceeded expectations in Oakland. The first-round back ranks fourth in the NFL with 1,061 rushing yards and he doesn’t appear to be hitting a wall. The Alabama product has really set the tone for the revitalized Raiders.

The sixth-round pick has experienced some magical moments in Jacksonville, and he’ll have another chance to make a run at this award now that he’s been promoted ahead of highly-paid veteran Nick Foles. Minshew has middle-of-the-pack numbers, but if he can create some more Minshew memories in December and Jacobs falls off, this could be tight.

He’s slowed down on the stat sheet in recent weeks, but the No. 2 overall pick out of Ohio State still brings consistent pressure and is a force beyond the numbers as the heart of the NFC’s best defense.

Bush has also slowed down statistically, but the No. 10 overall pick still has 10 six-tackle games. He’s also become the heart and soul of one of the league’s best defenses. Dude is just always around the ball.

A torn ACL destroyed what was supposed to be Garoppolo’s first full season as an NFL starter, and there was some rust early this year. But he’s posted a 110.3 passer rating dating back to Week 8. He’s now a top-10 passer in pretty much every category.

The mid-season frontrunner has slowed down a bit since the end of October, but he’ll still easily go over 1,000 yards while making a gigantic impact fresh off a torn ACL.

The Dolphins have the worst roster I’ve ever seen, and it’s just been getting worse and worse throughout the season. And yet Miami is competing hard every week. Three wins is shockingly impressive, but Miami also lost to Washington by just a single point on a failed last-second two-point attempt and led both the Steelers and Bills in the second half. Had they won those three games, they’d be one game out of a playoff spot in the AFC right now.

Payton lost his superstar quarterback early in the season, and then he lost superstar running back Alvin Kamara. But the 10-2 Saints just keep winning. He deserves credit for that, and for keeping his team focused after a tumultuous conclusion to their 2018 campaign.