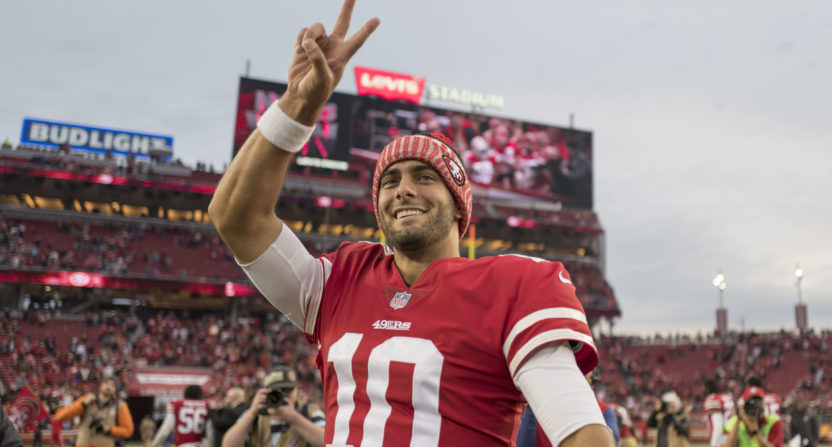 It’s been a while, but the 49ers are fun again. The Cleveland Browns will have the No. 1 draft pick (because for some reason they continue to be allowed to own such high picks). The NFL instant replay system continues to do its job too well. And what does the playoff chase look like after Week 16 and going to Week 17?

All of that and more is waiting to be unwrapped in your Christmas edition of the NFL Blitz!

Flex the 49ers to SNF in Week 17. Let the world see Jimmy Garoppolo.

Quick, which team in the NFL has the longest active winning streak? It’s the San Francisco 49ers, with four straight victories.

Jimmy Garoppolo continues to impress while the 49ers are showing late signs of life that bring plenty of hope for the 2018 season. It’s obviously too late for anything to happen now, other than the 49ers play themselves out of a high draft pick, but football is fun again in San Francisco.

Garoppolo gave the 49ers an early lead on Sunday against the Jacksonville Jaguars with a push at the goal line for a touchdown and then he went off in the fourth quarter to lead the 49ers back from a 19-16 deficit (after the Jaguars dug out of a 16-0 deficit themselves). The fourth-year pro threw a five-yard touchdown pass to Trent Taylor and the running game scored two more on the ground with Carlos Hyde and Matt Brida each doing the honors in a 44-33 victory.

The Jags defense has been pretty good this season, but the 49ers just shredded them on the west coast.

Jimmy Garoppolo, playing against the best defense in the NFL, marches the 49ers down the field for a touchdown on the first possession of the game. This guy is unbelievable.

And here’s the kicker of it all: The result of this game clinched a first-round bye week for the New England Patriots, who traded Garoppolo to the 49ers before the trade deadline. Was this all a part of Bill Belichick’s master plan to secure a first-round bye? You just never know, right?

But say this about the 49ers. This team could very well be a problem in the NFC West next season. Garoppolo is going to lose a game at some point in his career, I’m fairly certain, but his arrival has solved the biggest need for the franchise.

Another week of bizarre video reviews

What’s the point of even having instant replay when a play like this is overturned? The play in question came in the Buffalo Bills-New England Patriots game. An apparent touchdown catch for Kelvin Benjamin was taken off the board because officials determined that Benjamin did not have control of the football.

Dean Blandino says the refs were being overly technical, and that’s a nice way of putting it.

Based on all the evidence, @DeanBlandino says the Bills' TD against the Patriots should have stood — and that officials are being "overly technical." pic.twitter.com/6pftaLUKfL

We have seen far too many plays overturned because the review follows the official wording of the rule book far too closely. Anyone who witnessed this play would tell you it was a catch, even some Patriots fans. At the time, the touchdown coming off the board was a turning point because the Bills had to settle for a short field goal instead.

The Patriots still went on to win by a comfortable margin, so it’s no guarantee this call ultimately decided the game like last week’s Jesse James ruling in Pittsburgh did.

regarding the Buffalo no touchdown, nothing more irritating to an official than to make a great call and then someone in a suit in an office in New York incorrectly reverses it. It is more and more obvious that there isn't a standard for staying with the call on the field.

I look forward to seeing what controversial instant replay review goes in New England’s favor next week with home-field advantage on the line.

Despite the loss out west, the Jacksonville Jaguars still managed to wrap up the AFC South Division on Sunday. That came courtesy of the Tennessee Titans falling against the Los Angeles Rams, who also clinched the NFC West as a result of their win. For the moment, both the Jaguars and Rams are sitting with the No. 3 seeds in the AFC and NFC, respectively.

The New Orleans Saints wrapped up a playoff berth with their home win against the Atlanta Falcons. The Carolina Panthers also secured a playoff spot in the NFC with a victory over Tampa Bay. While the Saints never had much of a doubt against the Falcons, the Panthers needed to score a late touchdown to take a lead in the closing seconds against the Bucs. Cam Newton bobbled the ball as he took the snap and still managed to score the go-ahead touchdown that put Carolina in the playoffs.

Cam Newton with the fumble … and the game-winning TD to clinch a playoff berth for the Panthers! #TBvsCAR pic.twitter.com/9i7oOkWWJE

The Seattle Seahawks and Dallas Cowboys played what amounted to a Week 16 playoff game, with the winner managing to stay alive to compete for a playoff spot in Week 17 and the loser locked out of the postseason fun this year. Despite having Ezekiel Elliott back on the field, the Cowboys could not get by Seattle and now Dallas will be staying home in January.

The Detroit Lions were also officially scratched from the running thanks to a road loss against the Cincinnati Bengals. What a way to be ousted from contention. The Green Bay Packers were dropped out of the race on Saturday with their home loss to the Minnesota Vikings, who got their hands on a first-round bye and continue to push the Eagles for home-field advantage in the playoffs.

In the AFC, the Miami Dolphins were officially eliminated after losing on the road against the Kansas City Chiefs. The Chiefs clinched the AFC West with the win, securing a home game in the AFC Wild Card weekend. The Oakland Raiders, without playing a down of football, were also eliminated ahead of their Monday night game in Philadelphia.

There are now three teams battling for the final spot in the AFC playoffs. The Tennessee Titans are clinging to the sixth and final spot, but the Los Angeles Chargers and Buffalo Bills are still on the radar and need some help in the final week of the season.

We are just one game away from Cleveland Browns fans celebrating an 0-16 season with a mockery of a parade. It really is impressive just how bad the Browns are and how allergic they are to winning football games.

The last display of pure ineptitude came Sunday afternoon in the Windy City against the Chicago Bears. DeShone Kizer was picked off twice and Rashard Higgins fumbled away the football just when it seemed Cleveland might reach the end zone. It was just one of those days.

The Browns didn’t even have a reason to celebrate by making snow angels like the Bears did.

The Browns have now officially clinched the No. 1 pick in the 2018 NFL Draft. Don’t be shocked if they go right back to scouting quarterbacks as they look for improvement across the board.

Seahawks 21, Cowboys 12: The Seahawks stay alive in the NFC playoff hunt for one more week after a big win on the road against the Cowboys. Seattle’s defense rose to the occasion and Justin Coleman went for a plunge in the big Salvation Army pot after a pick-six.

A pick-6 AND a leap into the Salvation Army pot for the Seahawks! #SEAvsDAL pic.twitter.com/P3CYb74fb0

The Seahawks pick off Dak Prescott on a ball that bounced off of Dez Bryant's hands #SEAvsDAL pic.twitter.com/3R7Al7Q3Wx

In his first game back with the Cowboys following his suspension, Elliott rushed for a game-high 97 yards on 24 carries. In the end, this 2017 season feels like a lost season for the Cowboys. Is Jason Garrett on a hot seat now? Not according to Jerry Jones.

The Seahawks can clinch the final wild-card spot in the NFC playoffs next week with a win over Arizona and a Falcons loss to the Panthers. Seattle is very much in the mix.

Rams 27, Titans 23: The Rams clinched the NFC West and are in good shape to get the No. 3 seed for the wild card weekend. Todd Gurley was once again impressive with 118 rushing yards and 158 receiving yards with two receiving touchdowns. It was an MVP-caliber performance worth considering. Meanwhile, what exactly has happened with Marcus Mariota?

On his first pass of the day, Marcus Mariota was intercepted by @RamsNFL Cory Littleton

Per Next Gen Stats, Mariota entered Week 16 with the worst passer rating on tight window throws (17.5) this season among 30 QBs

Tight Window: Less than 1-yard of separation at catch

Chiefs 29, Dolphins 13: While the Chiefs celebrated a second straight AFC West crown and the Dolphins were mathematically eliminated from the playoff chase, the story of this game was this fumble recovery by Marcus Peters.

This is an insane fumble recovery by Marcus Peters pic.twitter.com/6ws2g6GwG7

Saints 23, Falcons 13: As mentioned earlier, the Saints were in full control of this one from start to finish to put their division hopes in sight next week. But how about that interception by Marshon Lattimore?

Bengals 26, Lions 17: Is there more of a Detroit Lions way to be eliminated from postseason contention than by losing to a Bengals team with a losing record? The answer is “no.”

Redskins 27, Broncos 11: Potential future Denver Broncos quarterback Kirk Cousins passed for 299 yards and three touchdowns in what may be his final home start in a Redskins uniform. Cousins has been discussed as a possible option for the Broncos, although I tend to think Eli Manning and/or a first-round draft pick would be more of a suitable game plan for John Elway. Whatever happens, it sure looks like Brock Osweiler won’t be the guy.

Chargers 14, Jets 7: It wasn’t pretty on the road, but the Chargers will take it to keep their slim playoff hopes alive going into Week 17.

All your rowdy friends are coming over tonight (and earlier)

The NFL is serving up a Christmas doubleheader with the Pittsburgh Steelers visiting the Houston Texans in the late afternoon and the Philadelphia Eagles hosting the Oakland Raiders in the primetime slot. The Eagles can clinch home-field advantage through the NFC playoffs with a win against the suddenly hopeless Raiders. The loss of Carson Wentz is tough to overcome in the hunt for a Super Bowl, but potentially getting two playoff games at home could still give the Eagles a decent chance to get to the Super Bowl.

The Steelers will lock up a first-round bye in the AFC playoffs with a win against the Texans. Of course, the Steelers are also looking to keep pace with New England to have a shot at winning home-field advantage through the playoffs, although they will need the Patriots to lose or tie their final game of the season.