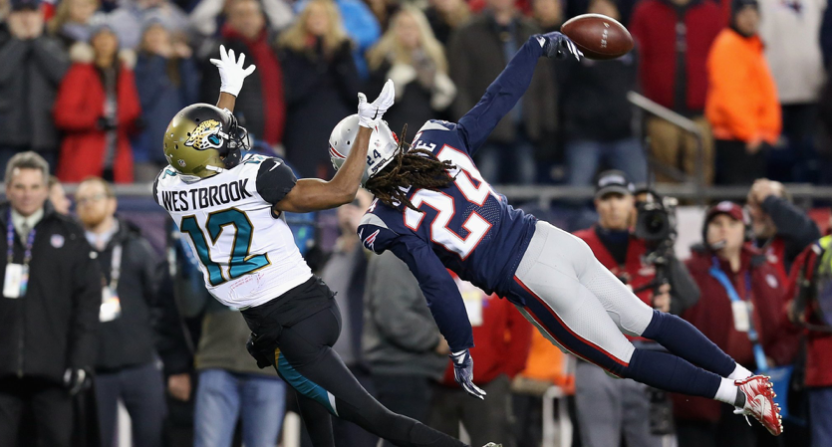 Sunday’s NFL conference championship games delivered a patented fourth-quarter rally by one of the greatest quarterbacks of all time and a game of a lifetime for a journeyman backup. When all was said and done, Tom Brady and the New England Patriots willed their way back to the Super Bowl with the hope of defending their championship and Nick Foles led the Philadelphia Eagles into their third Super Bowl appearance in a complete annihilation of the Minnesota Vikings.

As if we needed another reminder of the brilliance of Tom Brady, we got one on Sunday. In the AFC Championship Game, the Jacksonville Jaguars held a 10-point lead on the defending Super Bowl champs in the fourth quarter. But that was not enough while Brady still had time to mount a comeback, regardless of the status of his injured right hand. So leave it to Brady to drive the Patriots for a game-winning touchdown, despite losing Rob Gronkowski to a concussion earlier in the game.

Once again, Brady delivered — putting the Patriots on top with a beauty to the back of the end zone to Danny Amendola, who sprawled out and did everything he could to make the catch.

The Jaguars, who actually had a fantastic effort from Blake Bortles, still had a chance to win the game after the Patriots took the lead, but a fourth-down stop with a terrific breakup sealed the deal for the Patriots.

And with that, yet another comeback from a double-digit deficit ends up in the win column for the Patriots.

Brady completed 26 of 38 passes for 290 yards and two touchdowns, including the go-ahead score before the two-minute warning. After days of heightened attention to his throwing hand, the injury appeared to be nothing more than an overblown story that meant very little. However, the story was manipulated by the Patriots, who even listed Brady as questionable for the game. But Jacksonville wasn’t going to let its guard down on the off-chance Brady wouldn’t play.

What a hand job by Tom Brady.

All eyes will continue to be on Brady’s hand, though (and the cameras too, much to the chagrin of Brady), in addition to the status of Gronkowski for the Super Bowl. The early reports seem to be optimistic about Gronkowski’s chances of playing. Having an extra week to recover after undergoing concussion protocol certainly comes in handy here.

Rob Gronkowski is in the concussion protocol. There’s optimism Gronk will be cleared by the Super Bowl, according to a source

How do u even evaluate rob gronkowski for a concusson?

Here was a touching moment between former LSU teammates on the field, showing the raw emotion of the game.

Fournette & Francois got me in the feels pic.twitter.com/Iodpt8EnKA

The question has to be asked, however. Do Patriots fans actually buy conference championship gear any more?

This will be New England's first trip to the Super Bowl since 2017.

Belichick’s just like “put it with the others” ? pic.twitter.com/q8vNJxUGIO

The Patriots will be playing in their 10th Super Bowl in franchise history, more than any other team in the NFL. They will also be going for their sixth Super Bowl title, which would tie the Pittsburgh Steelers for the most in NFL history and break a second-place tie with the Dallas Cowboys and San Francisco 49ers. Their opponent will be going for their first Super Bowl championship.

The Eagles had played for the NFC Championship before, and fans had seen their share of conference title disappointments. Minutes into Sunday’s NFC Championship Game, things looked ominous with the favored Vikings driving right down the field for a 7-0 lead, while the Eagles receivers failed to make a couple of catches on their own first offensive series. Add a special teams penalty on a punt, and things were looking bad for Philadelphia.

Then Patrick Robinson returned a Case Keenum interception for a 50-yard touchdown to tie the game, and the Eagles were on their way to 38 unanswered points in an NFC Championship Game blowout nobody could have seen coming.

It was hardly a game from that point on. The Vikings went three-and-out on their next two possessions and LeGarrette Blount pounded his way up the middle for a touchdown to give the Eagles the lead. Little did anyone know at the time just how lopsided this game was really about to become.

The Eagles fans are doing the "Skol" chant but replaced it with "Foles." ? pic.twitter.com/E3GMwNTqBx

The Eagles ripped apart the NFL’s top defense for 456 yards of offense and 27 first downs. Nick Foles passed for 352 yards and three touchdowns and the Eagles didn’t commit a turnover the entire night.

The Vikings, however, couldn’t avoid such luck and turned the ball over three times. Three red zone trips came up with zero points for Minnesota, with turnovers on each drive: one fumble, one turnover on downs, and this interception that just demonstrated how the Eagles had all the luck on Sunday night.

A dream season for Case Keenum and the Vikings, facing a chance to become the first NFL team to play a Super Bowl in their home stadium, quickly crumbled against the Eagles. For the second week in a row, Philadelphia embraced the underdog role (and guess what, the Eagles are underdogs in the Super Bowl too) in resounding fashion. After the game, Eagles fans were climbing greased-up traffic lights, cursing on live TV and running into poles trying to catch the subway. It was quite a night to party in Philly.

Well, the Eagles are going to have one less fan cheering them on in the Super Bowl… pic.twitter.com/ZPq1Gx6gM9

Jay Ajayi, acquired via trade from the Miami Dolphins during the season, was quite emotional on the field after the Eagles captured the NFC crown.

.@JayTrain couldn't hold back the emotions after his dream of reaching the Super Bowl came true ? pic.twitter.com/YiuL9oYnRF

Keeping the emotions flowing, Julie Ertz of the U.S. women’s national soccer team (and wife of Eagles tight end Zach Ertz) was informed after their game that her husband and the Eagles were going to the Super Bowl. She was pretty happy, and the reaction of Zach Ertz watching the video was also moving.

As soon as the whistle blew here in San Diego, we had some good news for @julieertz…??@ZERTZ_86 & the @Eagles are heading to the @SuperBowl! pic.twitter.com/dI5MvG53VR

Things might be a tad awkward in Minnesota in a couple of weeks.

And now the people of Minnesota get to see #Eagles fans everywhere for a week.

With Vikings out, Giants set to hire Pat Shurmur

The game wasn’t even officially over when Jay Glazer filed a sideline report in Philly to say the New York Giants will go ahead and move on hiring Vikings offensive coordinator Pat Shurmur as their new head coach. At the time, the Eagles were in firm control of the game, so it appeared Shurmur was going to be available shortly to complete a contract with the Giants. (He previously interviewed with the Giants during the first-round bye week.)

Expect the Giants to make this coaching hire fairly quickly, as ESPN is reporting the deal could be done as early as Tuesday.

As for the Detroit Lions and Indianapolis Colts, it appears they will have to wait just a little longer before officially hiring New England Patriots coordinators Matt Patricia and Josh McDaniels, respectively, since NFL coordinators cannot be hired for other jobs until their seasons are officially done.

The #Lions and #Colts will have to wait a bit to hire their coaches. I think they’ll be OK with that

From @NFLGameDay: A look at how the coaching carousel will spin after today for the #Patriots coaches and the #Colts, #Lions, and #AZCardinals. pic.twitter.com/ZmhH5mqdL4