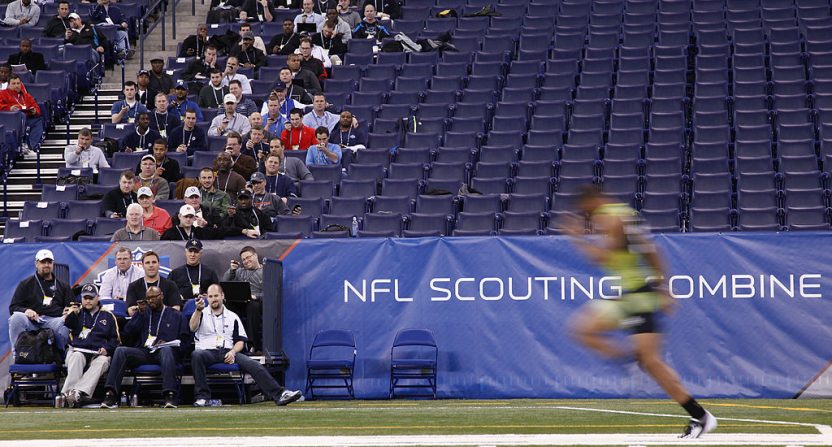 NFL franchises have been informed which draft-eligible prospects will be attending the annual scouting combine in Indianapolis this spring. There were two names of note that were not included on that list as the NFL looks to take a stand against any players with a violent past.

Oklahoma running back Joe Mixon and Baylor wide receiver Ishmael Zamora were not invited to the combine by the league as it rolled out a new policy banning players with a history of domestic violence or sexual assault convictions, among other offenses.

Mixon was captured on video (which was recently revealed to the public just before Oklahoma’s Sugar Bowl this past bowl season) punching a woman in the face and breaking multiple bones.

Zamora was seen on video kicking and beating a dog with a belt, which led to a three-game suspension at Baylor. The new policy for the combine was introduced to all NFL franchises last month, so the omission of one of the top talents in the upcoming NFL Draft (Mixon) should come as no surprise to those scouting running backs.

It’s not a bad decision by the NFL to make it more difficult for players who have screwed up off the field to earn their spot in the league, but the question is how much will not getting invited to the NFL Scouting Combine actually hurt players like Mixon and Ishmael? For Mixon, at least, it may not hurt him all that much anyway:

Strictly from on-field standpoint (which isn't only factor)

Joe Mixon's not getting drafted according to his 40 yard time anyway so I don't see a reason why y'all would be frustrated about this.

Zamora may have a bit more of a troubling time working his way up the draft boards at wide receiver. Not being at the combine will mean any pro day or private workouts will have to be very strong to help his chances as far as skill is concerned. Interviews will also be key for Zamora, as well as Mixon.

Putting on a good show in the combine drills is nice, but some would argue the more important part of the combine experience is interviewing with teams. Hard questions need to be answered, and the combine allows for those kinds of opportunities, both in press conference form and in one-on-ones with coaches, general managers and maybe even owners. Not being in Indianapolis for the combine can be a hindrance for NFL hopefuls, especially any sitting on the fringe.

The odds are good Mixon is still going to be a first-round draft pick of some NFL team, because football wise he is that good. Does he come with baggage? Of course. Not being at the combine shouldn’t hurt him too much though, but setting the precedent now is a no-brainer decision by the league.