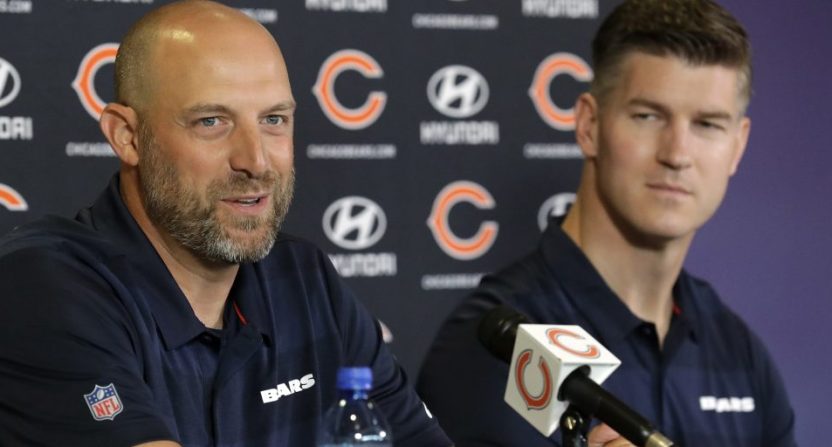 It is officially ‘Black Monday’ in the NFL as teams begin to announce firings around the league. The Chicago Bears have made two significant moves.

The Bears have announced that they are moving on from head coach Matt Nagy as well as general manager Ryan Pace.

The writing was on the wall for Nagy, as reports had come up last week from WFAN’s Boomer Esiason about Nagy coaching his last game this week. Between his play-calling, strange decision-making with Justin Fields, and the lack of wins, this seemed like a foregone conclusion for some time.

Bears fans can rejoice as it is a complete overhaul coming for the Chicago front office. It was not a guarantee that Pace would be gone along with Nagy, but now the team will be having a fresh start going into the 2022 season.

Here are some reactions around the NFL world from the Chicago Bears fans and media on the firings.

TED PHILLIPS NEXT!!! KICK EM ALL OUT! https://t.co/ZKipXfMrJD

Both Ryan Pace and Matt Nagy are gone. Wow.

The #Bears made the right choice. A total retooling of the front office is what this team desperately needed.

MATT NAGY AND RYAN PACE HAVE BOTH BEEN FIRED pic.twitter.com/fOFRRE9ceo

Nagy finished his time with the Bears with a 34-31 record while going winless in two playoff appearances. Pace was with the Bears for 7 seasons and certainly had a part in drafting numerous misses for the Bears in the NFL draft over the years.

This year’s 6-11 season was the final nail in the coffin for both Nagy and Pace, as Bears fans will now get a fresh start for quarterback Justin Fields next season.

Matt Nagy's four-year run in Chicago is over. It's the change #Bears fans have been hoping for. Now, they get it. Next step: find a coach who can get the most out of Justin Fields.

It was very apparent that Nagy was not getting the most out of Fields that he could have this season. He had trouble committing to Fields for the future, often starting veteran Andy Dalton instead.

Whoever is the next coach for the Chicago Bears will certainly need to make it a point to center their plan around Field in the future.