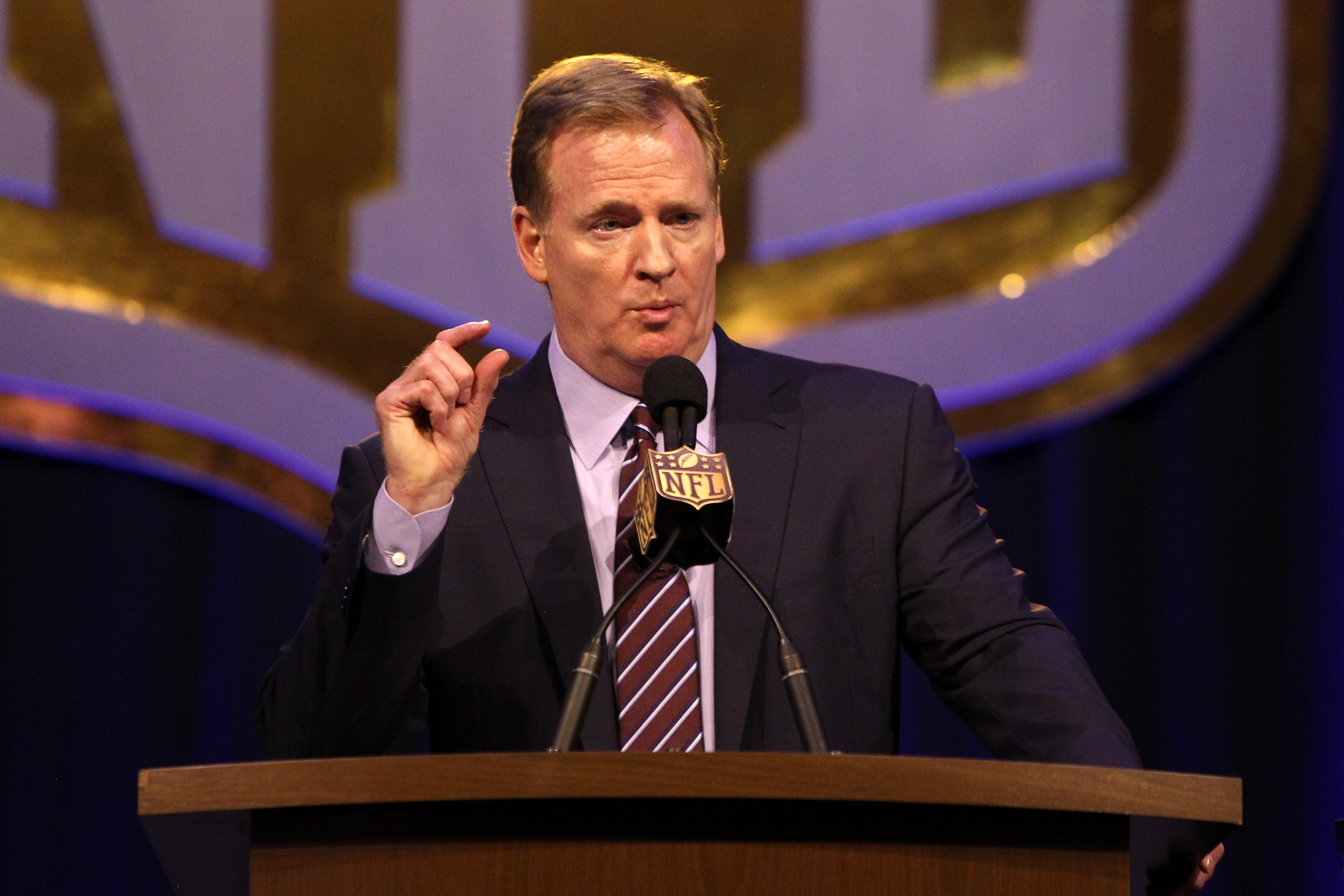 Ten years ago today, Roger Goodell ascended the throne, er, position of NFL Commissioner. Whereas his predecessor, Paul Tagliabue, was seen as a benevolent dictator, Goodell’s reputation has been much more of the latter and very little of the former.

Goodell’s rise to power reads like the American Dream. After writing a letter to every NFL team in search of a start, he latched on with the league in 1982 as an administrative intern under then-Commissioner Pete Rozelle. After an internship with the New York Jets, he returned to the league office to work as an assistant in the PR department. From there he worked his way up the ladder, eventually becoming the NFL’s Executive Vice President and Chief Operating Officer in 2001. He eventually assumed the role of NFL Commissioner on September 1, 2006.

Plato once said that “the measure of a man is what he does with power.” As Roger Goodell is widely considered the most powerful person in American sports, the ten-year anniversary of his ascension seems like a good time to look back on the decisions that have shaped his tenure, as well as the NFL itself.

There are murmurs of the NFL considering or mulling the idea of a minor league but the truth is that they used to have one. NFL Europe operated between 1991 and 2007 and gave the league a place to let prospects work their way up in a live-game environment. Unfortunately, the league was a money pit, losing about $30 million a year. Goodell made what was likely a good decision at the time, folding the league and putting the international focus on playing actual NFL games in places such as London and Mexico City.

One of the first major changes Goodell made as commissioner was to enact a new player personal conduct policy, meant to cut down on off-field issues and make an example out of players who violate the league’s standards. The first players to run afoul of the new policy were Pacman Jones and Chris Henry. Jones was involved in a shooting at a Las Vegas strip club while Henry had committed multiple crimes and had been arrested on drug charges. Jones was suspended for the entire 2007 season while Henry lost eight games, both of which felt draconian to many for their harshness. Those kinds of penalties have since become commonplace under Goodell for players who “tarnish the shield.”

Protecting the Shield in the media – League of Denial, Ballers

Goodell’s NFL is very concerned with its public image and how they are perceived. As such, any kind of television show that represents what life is like for pro football players is going to catch their attention. When ESPN was involved with League of Denial, a joint effort with PBS Frontline, the league was not a fan and ultimately ESPN pulled its name off the production. The focus on concussions was all a bit too much for Goodell and the NFL, especially from one of their rights partners.

Years later, the Showtime TV program Ballers followed the same playbook as Playmakers, a show the NFL forced ESPN to cancel before Goodell’s tenure, this time including actual NFL uniforms and with cameos from NFL players. According to executive producer Mark Wahlberg, he received calls from Goodell and various NFL league owners saying “you can’t do this.” He chose to ignore the calls (which the league denied ever happened) and the show remains on the air.

The first time, but not the last time, that Goodell tangled with the New England Patriots over rules. During a September 9, 2007 game between the Patriots and New York Jets, a New England employee was videotaping the Jets’ coaches from their own sideline during the game, which was considered illegal by the league. The end result was the NFL fining Patriots head coach Bill Belichick $500,000, fining the Patriots organization $250,000, and taking away the team’s first-round pick in the 2008 NFL Draft. The fine on Belichick was the largest ever imposed on a coach in the league’s 87-year history and many accused Goodell of running a hasty and slapdash investigation into the controversy. Others thought that the league took it easy on the Patriots given Goodell’s relationship with team owner Robert Kraft. Goodell was also accused of trying to steer the entire controversy away from any kind of congressional inquiry as to save face. Whatever the case, it set the tone for Goodell’s curious decision-making in highly-visible, crisis situations.

On March 12, 2011, all 32 NFL owners imposed a player lockout, closing team facilities and shutting down league operations. The issues that players and owners were sparring over ranged from the salary cap to players’ safety and health benefits to revenue sharing and more. This was the situation where it was made abundantly clear that Goodell’s alliances were and always will be with the owners and not the players. Thought he stated that the league would not consider replacement players, he also became a symbol of the owner’s demands. The lockout ended July 25, 2011, ensuring that Goodell wouldn’t oversee an abbreviated season.

Perhaps the most bungled controversy involving Goodell to date, this scandal was seen as the commissioner attempting to use brute force in order to create a sense of order and seeing the whole thing blow up in his face, at least from a PR point of view. New Orleans Saints assistant Gregg Williams and others were accused of paying out bonuses (a.k.a. bounties) to defensive players who injured opposing offensive players. Goodell suspended Williams indefinitely, head coach Sean Payton for the entire 2012 season, general manager Mickey Loomis for eight games and assistant head coach Joe Vitt for six games. The Saints were also fined $500,000 and stripped of their 2012 and 2013 second round draft picks.  Four current and former Saints players were later suspended. Former commissioner Paul Tagliabue eventually overturned all player sanctions in an appeal process after determining the coaches were primarily at fault, which was seen as a blow to Goodell’s absolute power. The damage had been done, however, and the league was officially on notice that the commissioner was going to bring down harsh penalties and deal with the fallout later.

When the NFL and NFL Referees Association couldn’t come to a new agreement, the league locked out it’s referees and hired replacements. Those replacements worked through Week 3 of the regular season before an agreement was reached and the original refs returned. The reaction to replacement refs was strong and negative. There were multiple incidents that seemed to imply that they were not capable of handling the role, including botched calls that impacted the outcomes of games. Goodell wrote an open latter to fans, saying “you deserve better” and regretted that an agreement hadn’t been reached sooner. While not Goodell’s fault, specifically, it was just another black eye on his watch.

While the debate still rages on (somehow) about whether or not the Redskins name is racist, it seemed pretty clear that the easiest thing to do would be for the league to force the franchise to consider a name-change, which would garner great PR and move the league forward. Instead, Goodell backed the Redskins and owner Dan Snyder in the fight against change. According to Goodell, “The Washington Redskins name has thus from its origin represented a positive meaning distinct from any disparagement that could be viewed in some other context” and that “the name is a unifying force that stands for strength, courage, pride and respect.” Ignoring the fact that the franchise’s original owner was racist and that the name offends a sizable portion of people, Goodell was seen as standing on the wrong side of history.

The NFL has come under fire in recent years about the effect of playing football when it comes to brain damage. Despite many injuries and deaths presumed to have been caused by NFL play, Goodell would often take a stance akin to cigarette companies denying that their products cause cancer. Every time a new controversy or report would pop up, Goodell’s NFL would try to squash or minimize it. Eventually, the league reached a $765 million settlement with the former NFL players over head injuries, also creating a $675 million compensation fund for former players affected by CTE and other injuries. Even so, a U.S. District Judge had to step in to force the league to remove certain payout caps as they were deemed inadequate. Through it all, Goodell has been pegged as a company man, saying what he needs to in order to deflect blame and protect the league rather than trying to help.

I’m tired of talking about Deflategate. You’re tired of talking about Deflategate. Everyone is tired of talking about Deflategate (except Bill Simmons and Ben Affleck). But the fact that it dragged on for so long and became such a huge distraction makes it the kind of controversy that will follow Goodell around for the rest of his career. You know the details. Tom Brady and the Patriots were accused of deflating footballs used in the AFC Championship Game against the Indianapolis Colts. Perhaps inspired by the reaction to Spygate, Goodell went in on the Patriots, suspending Brady for the first four games of the 2015 season and upholding that suspension during the appeals process. The franchise was also fined $1 million and had to give up their 2016 first round draft pick as well as their 2017 fourth round pick. Unwilling to take it lying down, Brady and Patriots bit back and almost appealed the legal case all the way to the Supreme Court. Eventually, Brady decided to take his medicine but the hurt and disdain created by the entire controversy is going to make Goodell persona non grata in the Greater Boston Area for the rest of his life.