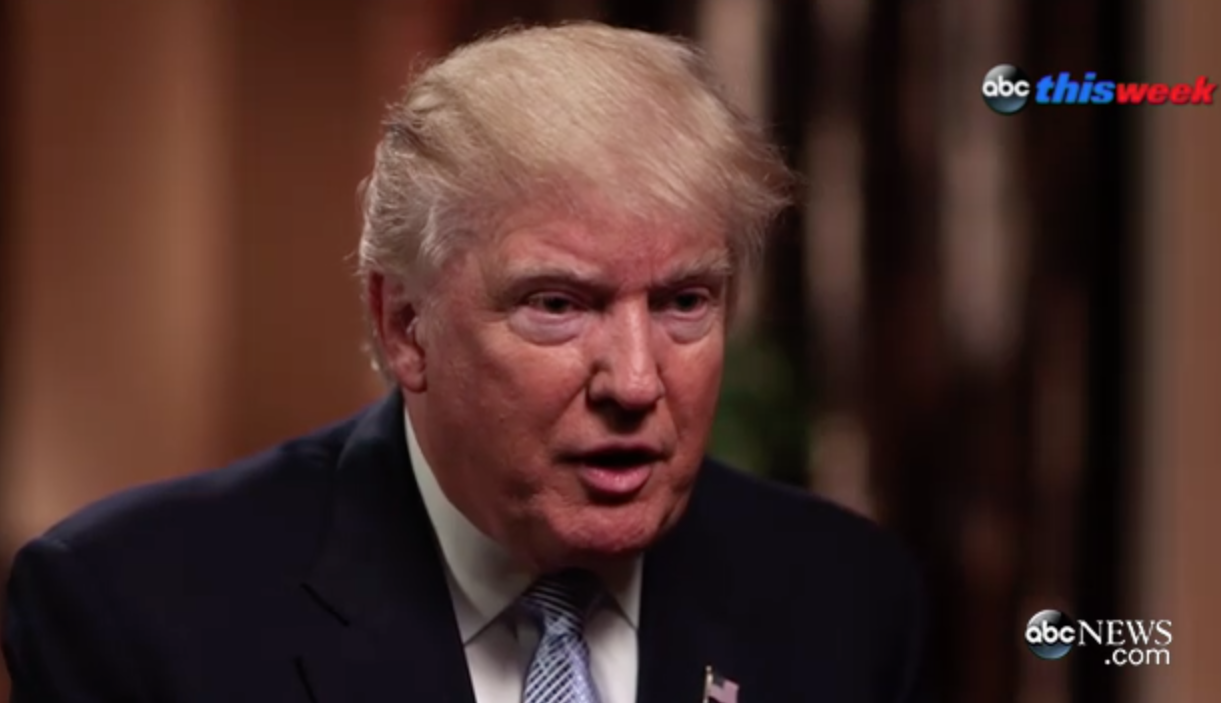 The NFL denied sending Republican Presidential nominee Donald Trump a letter complaining that NFL games will take place at the same time as two of three Presidential debates after Trump claimed he received such a letter from the NFL. The first debate will take place September 26, opposite Falcons vs. Saints on Monday Night Football. The second debate is on October 9, during the Giants vs. Packers Sunday night game.

Speaking with George Stephanopoulos on ABC This Week, Trump had an issue with the first two debates being scheduled against the NFL due to the possibility that potential voters would choose the NFL instead of the debate and not hear what Trump would have to say. That’s perfectly reasonable. The debates should be available to as many people as possible and having it against the most popular sport in the country isn’t a smart decision. It’s what Trump says after that Trump’s reasoning goes astray.

Trump states that Hillary Clinton is “against the NFL” and cites the fact that her Democratic primary debates against Bernie Sanders were situated on Saturday nights and during NFL games as a means to keep people from watching. Regardless if there’s any validity to that, these Presidential debates were chosen back in September 2015 by the bipartisan Commission on Presidential Debates, before it was known that Trump or Clinton were the candidates. Further more, the 2012 election had a debate take place during Monday Night Football, so this isn’t a new concept. And to add that before 2012, debates were held on Friday night (usually known in TV to be terrible for viewers) in 2004 and 2008 so it’s arguable that scheduling has gotten better, despite the NFL conflicts.

More than likely, this is a situation of “Occam’s Razor” whereas the simplest solution is probably the correct solution. It would be safe to say that the Commission on Presidential Debates aren’t big NFL fans (there are a few of them) and thus when scheduling these dates, either didn’t give a second thought about the NFL or figure the NFL won’t negatively factor into the viewership of the debate.

Next, Trump said that he received an email from the NFL complaining about being in competition with the debates on two nights. NFL PR spokesman Brian McCarthy denied any such letter was sent.

@mikesisak @alexweprin While we'd obviously wish the Debate Commission could find another night, we did not send a letter to Mr Trump.

This isn’t Trump’s first rodeo with the NFL. Back in the 80’s, Trump teamed up with the USFL to compete against the NFL. And after suing the league on antitrust grounds, the USFL folded after only winning a total of $3 in damages. That was not lost on NFL Network’s Rich Eisen when he heard the news.

The last letter the @NFL probably sent @realDonaldTrump was to enclose his check for 3 dollars. https://t.co/eqDw22Q0ru

Let’s face it, the debates will probably still get some of the highest viewership of any previous debate but scheduling them during NFL games brings up the potential for fewer people to watch. Maybe the Commission on Presidential Debates should look into moving those two debates to another date if possible but I can’t imagine Hillary Clinton and the Democrats are thrilled about this either. There would be reason for her and the Democrats to be upset about the placement of these debates as well. People from all over the political spectrum will choose to watch football over the debate so that would theoretically hurt both candidates.