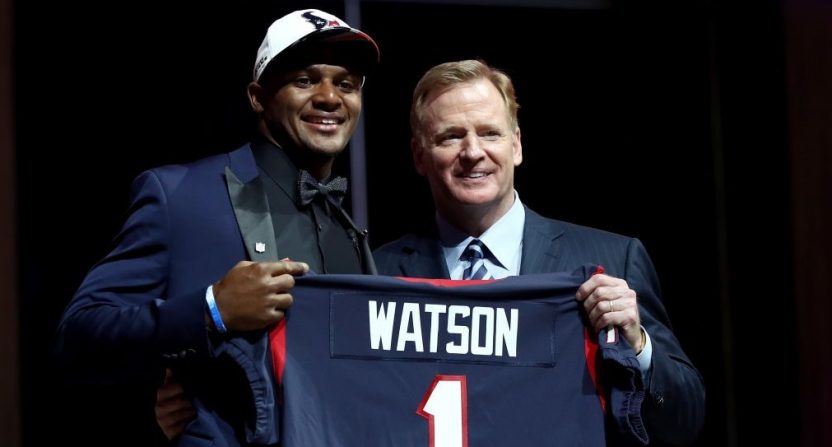 Nine different quarterbacks were selected in the 2017 NFL Draft — including three in the first round. But the order of those selections won’t necessarily dictate how quickly each of those passers end up seeing the field as a starter.

Of last year’s drafted QBs — an incredible 15 in all — No. 1 pick Jared Goff didn’t see the field until the middle of the season. Meanwhile, offensive rookie of the year Dak Prescott was starting in Week 1 for the Cowboys despite being picked in the fourth round.

So when will each of this year’s drafted quarterbacks earn their respective first career starts? Predicting the first through the last (if ever):

The former Clemson QB is battle-tested (he did beat Nick Saban in January’s National Championship, after all) and a legitimate dual-threat. While he fell just short of winning the Heisman Trophy in each of the last two seasons, the tough Tiger still threw for over 10,000 yards in his career, while adding nearly 2,000 more on the ground. Best of all for this list, his lone competitor for the starting job is Tom Savage. Just a few years into his career, Savage has performed well, but in very limited starts. Watson could win this gig in the preseason and start on day one.

Kizer’s limited experience is counter-balanced by his strong numbers through the air and on the ground, and the game-changing ability he exhibited each week with Notre Dame (even as the Fighting Irish struggled in 2016). The versatile Ohio talent steps into a situation that’s very much in flux right now for the Browns, too. Cody Kessler, Kevin Hogan and Brock Osweiler all bring questions to the table. And none of those three managed to hold down a starting job in 2016. For the rebuilding Browns, Kizer could be a surprising spark in the early weeks of the 2017 season.

Beathard was far from the most talented quarterback in this draft, and perhaps his third-round selection by the 49ers was a little bit of a reach. But looking at the situation he’ll step into in San Francisco, there’s ample opportunity for him to start before 2017 is up. Playing at Iowa, Beathard was largely asked to manage games. With reasonable accuracy, a quality arm and experience making solid reads under pressure, he could do more of the same in Kyle Shanahan’s first year as head coach.

Peterman thrived in Pittsburgh’s big-play offense last year under offensive coordinator Matt Canada, repeatedly making big throws as the Panthers’ defense kept opposing teams in games as well. In Buffalo, Peterman would have to dethrone Tyrod Taylor. But given the recent regime changes with the Bills, and Taylor’s own persistent uncertainty with the team, it could become an opening for Peterman. His experience with multiple offenses could help him start during 2017 despite the veteran competition from Taylor and Cardale Jones.

The Bears moved up to draft the big arm from North Carolina, but that doesn’t mean he’ll start on day one. Chicago also paid out a lot of money to Mike Glennon this offseason. Still, it would appear to be a matter of time before Trubisky assumes this job in Chicago. If he can make a quick transition from up-tempo spread to the NFL’s more traditional scheme, he may start by the end of 2017. But it’s more likely this is a lengthy rebuild for the Bears and Trubisky learns this fall before battling for the job in earnest come 2018.

Mahomes may have put up the biggest numbers in the draft, and he probably has the biggest arm as well. But two factors stand in the way of him starting this year: Alex Smith and the Air Raid system he comes from at Texas Tech. The Chiefs are a winning team and Smith’s been successful at the helm. Transitioning from the Air Raid to a pro-style system could also take time. If Kansas City misses the postseason and Smith struggles, perhaps they pass on his option for 2018. That would appear to be the soonest Mahomes starts, however, barring injury.

There are questions around Dobbs and his ability to put together full games of football — his Tennessee teams spent most of the last two seasons playing strong for just one half at a time. But Dobbs is athletic, has consistently made tough throws against SEC defenses and will have the chance to learn under Ben Roethlisberger. Roethlisberger’s health could spring him into action earlier. And murmurs on retirement could open things up for 2018. Dobbs is being groomed to start, though. It’s just a matter of when Big Ben decides (or is forced) to walk away.

Webb played in two different Air Raid systems in college, at both Texas Tech and California. So the transition is going to take a bit of time as he moves to the Giants’ West Coast offense. But lucky for him, he’ll get the time to ease into things while backing up the remarkably sturdy Eli Manning at the back-end of his successful career. Manning’s last understudy, Ryan Nassib, is no longer with the team, giving the second-string job directly to Webb. It may be 2019 or so before Webb starts, however.

It’s not a lack of talent that pushes Kaaya to the end of the list. It’s mostly the fact that he’ll be backing up Matthew Stafford in Detroit. Stafford, while a veteran, will still be just 29 years old during the 2017 season. And he’s only shown himself able to improve over time. If there’s one drafted quarterback who seems unlikely to start at all, it could be Miami’s Kaaya, stuck behind a QB with at least four or five seasons left in the league (if not more). If he starts at all in the NFL, it’s unlikely to be in Detroit.