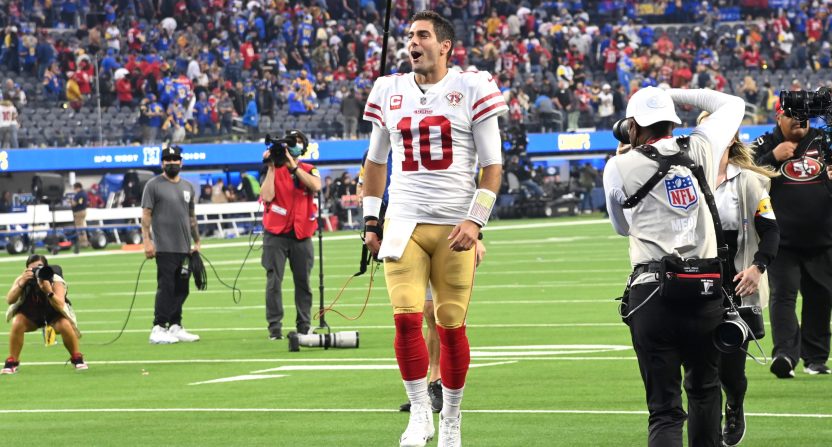 Last year, ESPN’s Jeremy Fowler reached out to several anonymous NFL executives to see what predictions they had for the upcoming season. Turns out, they didn’t do too bad, predicting that Carson Wentz would get traded, Alex Smith would retire, the 49ers would keep Jimmy Garoppolo, and the Patriots would draft a quarterback. Not every prediction panned out but there were enough that did that made this a worthwhile endeavor.

So, they’ve asked NFL executives to provide their predictions once more to see which major moves they expect to see in the offseason. And while Garoppolo’s prediction to stay put worked out this past season, the new prediction sends him to a very specific new location.

According to an anonymous NFL executimmy garve, they expect the 49ers to trade Garoppolo to the Washington Football Team where he would fit much better.

“I have some concerns about Garoppolo outside of the Kyle Shanahan offense, but Washington has some in-breaking stuff that would be similar,” the exec said. “It wouldn’t be as much of an issue if you can define throws for him.”

While the 49ers are making a decent run this season into the playoffs, there is a growing sense that they’ll want to move onto the Trey Lance era sooner than later, especially if they don’t think Jimmy G can get them all the way to the Super Bowl. If that’s the case, a trade makes sense. However, the specificity of saying WFT would be the destination certainly makes one wonder who this executive is and why they’d pick this franchise.

To be fair, the move would make sense for Ron Rivera’s club too as they are struggling to solidify a passing attack and find a stable quarterback option. And, as Fowler points out, the fact that teams know the Niners want a reason to start Lance hurts the leverage they have in Garoppolo’s value, so they probably wouldn’t have to give up a ton to get him.

We’ll have to see if this prediction pans out. And if it does, it will be fascinating to wonder how this executive knew it might happen.