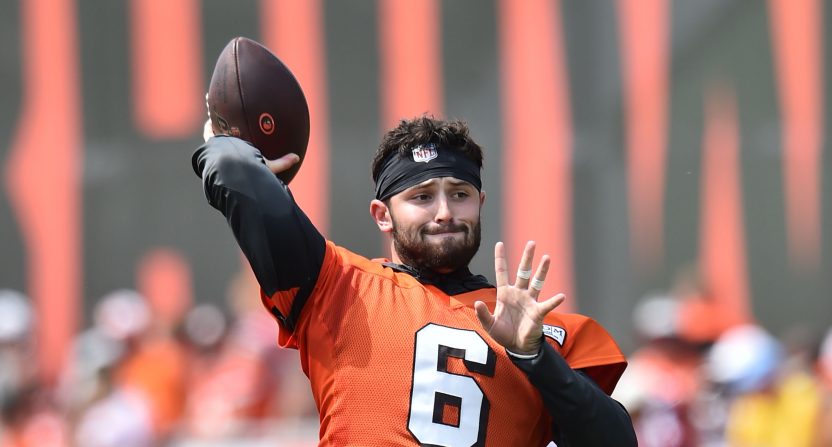 It was a disappointing season for the Cleveland Browns, and in particular for quarterback Baker Mayfield, who had an injury-ridden season that resulted in the team falling short of the playoffs.

Mayfield recently underwent surgery to repair a torn labrum in his non-throwing arm, missing the last game of the season after being eliminated for playoff contention.

The Browns appear to be in on Mayfield for at least the upcoming season, as Ian Rapoport and Tom Pelissero reported earlier this month that the team plans to move forward with him as their starting quarterback.

Despite this, one anonymous NFL executive believes that the Browns will look to trade Mayfield in 2022. This is what he had to say about a potential Baker Mayfield trade in the future for the Browns.

“At the end of the day, it’s not a great fit. He’d be best in a shotgun, up-tempo offense like they have in Arizona,” an NFC exec said. “The Browns will get rid of the only good quarterback they’ve had in years and fall into the same traps of the past.”

The executive also added that if the Seattle Seahawks were to move on from Russell Wilson, they could see that as a fit for a potential trade partner for the Browns.

While Mayfield hasn’t been great this year for the Browns, he is far better than they have had in years before him, missing out on picks such as Brandon Weeden and Johnny Manziel.

That being said, it will be worth monitoring going forward if Mayfield can have a more productive year next season, as it will be necessary for Mayfield to play better if the Browns are going to get back into the playoffs next season.