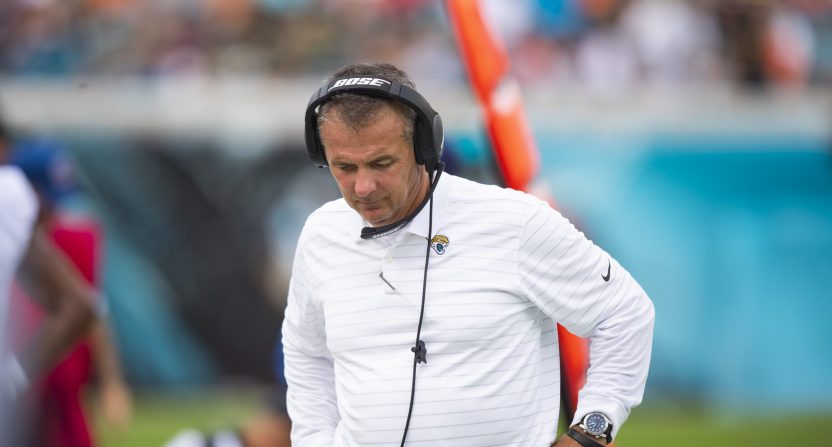 Ever since the videos and photos of Urban Meyer went viral last weekend, people have been wondering what those around the NFL were thinking. What would they have done had Meyer been their coach? Why do they think Meyer felt okay not traveling with his team to Florida and instead stayed to party in Ohio?

Mike Sando of The Athletic spoke with some NFL executives this week and asked them some of these questions.

As far as why Meyer felt like he could stick around and not travel with his team, something multiple people have said is very unusual in the NFL, one executive saw it as a classic case of a college power coach who isn’t used to oversight from anyone.

“College coaches are not like NFL head coaches, who spend all their time in the office,” a team exec told The Athletic. “In college, there is no owner. The A.D. doesn’t come down and look for you. He comes down and your secretary says you’re out recruiting and he says, ‘OK,’ turns around and leaves. He doesn’t know if you’re spending three extra days in Florida on the golf course, and if he does find out, you can always say, ‘Yeah, I was recruiting in Florida, one of the coaches down there wanted to talk about RPOs, so of course I brought my clubs and then we had dinner and talked ball.’ ”

Another executive noted that the transition is difficult for a lot of successful college coaches. While Kliff Kingsbury is doing well with the Arizona Cardinals, plenty of big-time college coaches have struggled (Nick Saban, Lou Holtz, Steve Spurrier).

Another executive noted that they didn’t like the way Meyer deflected blame and seemed uncomfortable having to be accountable. “As part of his apology, he said, ‘I’m not that guy.’ Stop it, you are that guy,” said the exec. “I think he’s still in denial.”

As far as the harsh public statement by Jaguars owner Shad Khan, the execs had differing viewpoints but all seemed to feel as though it was an attempt to set a baseline in case Khan decides he wants to fire Meyer with cause down the road and needs to be able to meet the requirements of a clause in the contract. However, one executive didn’t think what happened merited such a clause. It’s been reported that Meyer’s job is safe for now, but he’s certainly on notice.

You can read more of the executive quotes and reactions here.