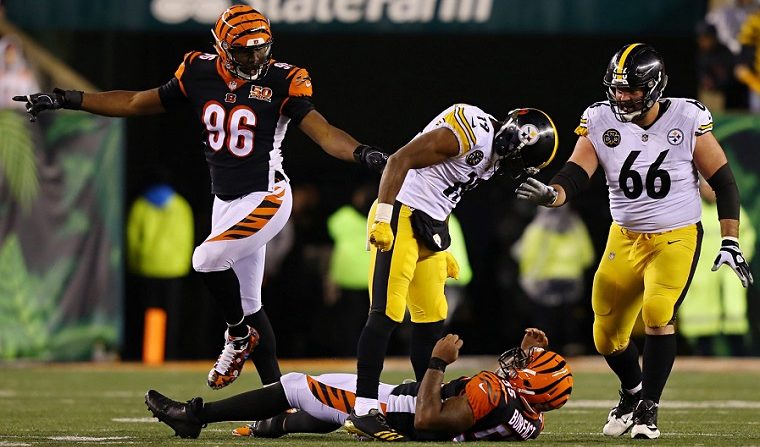 During the 2006 season, the NFL witnessed one of the most shocking acts of brutality on a football field when Tennessee Titans defensive tackle Albert Haynesworth stomped on the unprotected head of Dallas Cowbooys offensive lineman Andre Gurode. Haynesworth was suspended for five games, a record punishment for an on-the-field action. Even all these years later, the video is still jarring to watch.

There can’t be any place in the NFL for players going out and trying to deliberately hurt someone. And yet, we saw multiple occasions in Week 13 of players trying to do exactly that with the Bengals-Steelers bloodbath and Rob Gronkowski’s cheap shot. It all made for one of the more disconcerting weekends for the league (at least as far as action on the field goes) in some time.

Given what we now know about concussions, brain injuries, and CTE, the kind of acts we saw this past weekend can have no place at all in the game. The NFL could have sent that message loud and clear, but failed to do so this week with their light punishments for all parties involved.

First, Gronkowski, who was the perpetrator of this dirty hit after the play on an unsuspecting Tre’Davious White of the Bills. The star tight end delivered a blow against the back of White’s head with all of his weight. The cheap shot sent White into concussion protocol. However, Gronkowski wasn’t even ejected from the game and only given a one-game suspension.

Gronkowski’s hit is the most egregious example from this past weekend of the NFL letting a player off lightly for jeopardizing another player’s career. Given the force of the blow and the fact that it was to the back of White’s head, there’s no telling what damage could have been done. Add in the fact that it was from behind after the play and it’s hard to argue that it doesn’t deserve to be placed in the same category as Haynesworth’s infamous stomp.

And yet, Gronkowski’s suspension was four games less than that of Haynesworth in spite of knowing then a fraction of what we know now about the dangers of head injuries. Does the NFL really want to set the standard that intentionally concussing someone after the play is over is only worth a one-game suspension?

The Bengals-Steelers Monday Night Football clash was as violent a game as the league has seen in some time. Two players were suspended after helmet-to-helmet hits.

Steelers wide receiver Juju Smith-Schuster was suspended for a game after a high crackback block on Benglas linebacker Vontaze Burfict (who has a history himself of these types of plays himself).

Bengals defensive back George Iloka was also suspended a game for his missile launch into the head of Steelers wide receiver Antonio Brown on a fourth quarter touchdown pass.

As ugly as they were, at least in the Bengals-Steelers game, the two hits by Smith-Schuster and Iloka were on football plays. Nevertheless, that shouldn’t mitigate the impact of those collisions and the obvious evidence that there was intent to do harm. There’s a vast difference between what we saw on Monday night and a hit that is simply mistimed or misplaced.

Yes, there are some people (like Brent Musburger, apparently) who will scoff at these concerns. They’ll say that it’s just the political correctness of snowflakes that can’t man up and accept that football is a violent game played by violent men.

Yo,Snowflakes. Quit preaching. The Violent World of Sam Huff sold NFL football to the masses. The Dallas Cowboy cheerleaders gave us a little sex with our violence. Deal with it!

Geez, tell us how you really feel, Brent.

Of course football is a violent game in which the players put their well-beings on the line each and every week. We need no more stark reminder of that than the frightening injury suffered by Ryan Shazier in the same Bengals-Steelers game on Monday night. If anything, that should inspire the NFL and anyone who cares about football to take a stand against what we saw this week out of respect for what these players truly risk.

Head injuries are the single biggest issue the league needs to address over the next 10 to 25 years. And watching the Bengals-Steelers game on Monday night, there was a sinking feeling that it will be Exhibit A if there are any transformational changes to the game over the next generation.

In 2017, the NFL simply can not let players off the hook so easily for purposeful blows to the head with everything we now know about concussions and CTE. This is one issue where the league has to take a much tougher stand after the violent hits we saw this past weekend.

The NFL has long preached about their interest in player safety. From rule changes to concussion protocols to researching technology, the league has tried to put forward that they are doing the best they can to protect players after years of player health being put on the backburner. Last year, the league made an announcement that they were putting $100 million towards player safety. At the time, Roger Goodell said the league “can and will do better” when it comes to addressing head injuries in the game.

Given the violent and purposeful head shots we saw this week, the NFL missed an important opportunity to do just that.