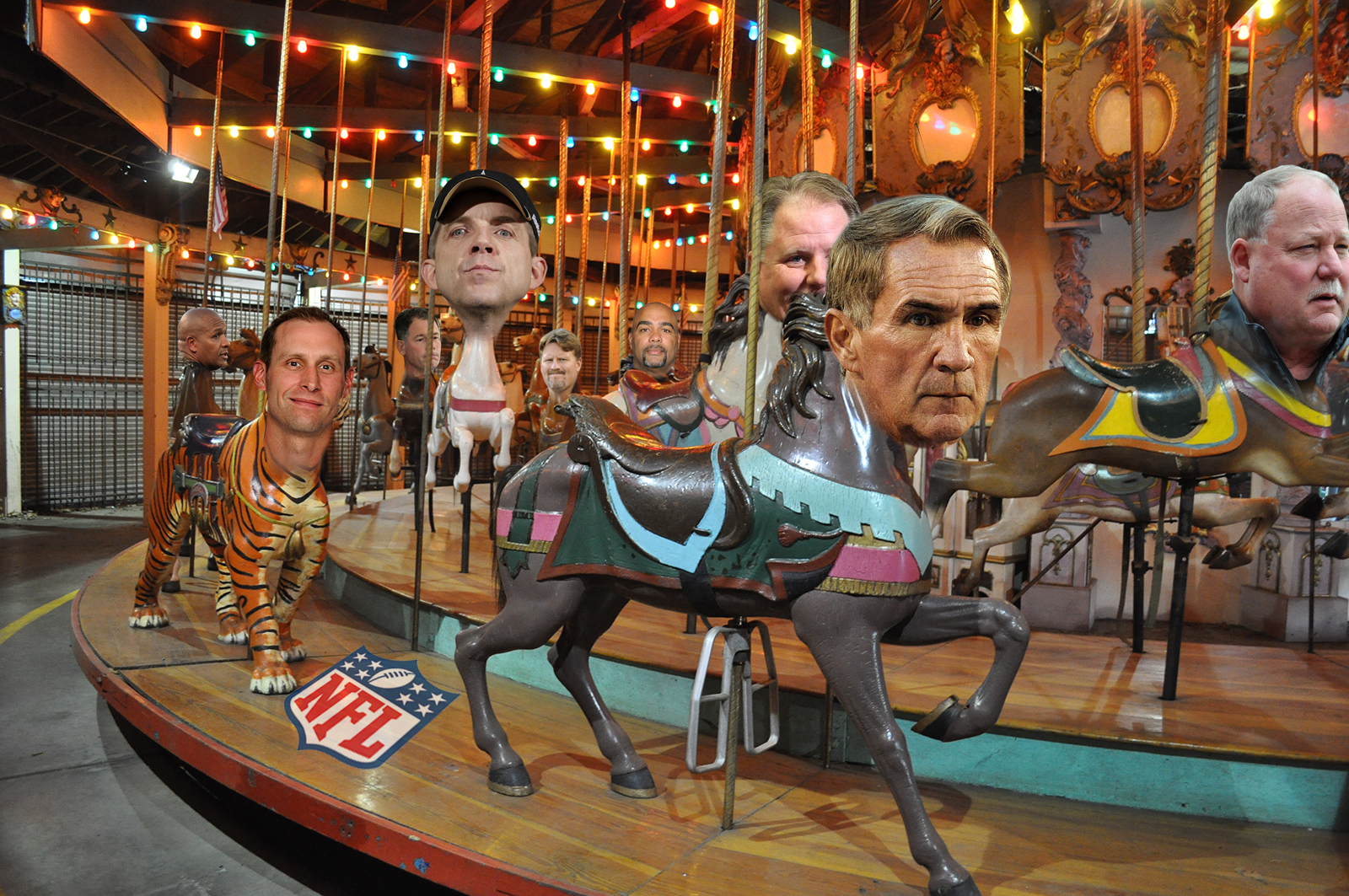 Nothing better illustrates the sham of the savior coach, and how everyone in the NFL is really just guessing, more than the yearly, pre-Wild Card round coaching carousel.

Just take a gander at some of the names now being thrown around. Mike Shanahan’s orange face has returned, as has the plump mustachioed one belonging to Mike Holmgren. Josh McDaniels and Hue Jackson are somehow garnering interest, you know, because things went so well the last time those two were handed the reigns.

The Giants are planning on interviewing Steve Spagnuolo, yes, the same Steve Spagnuolo that went 10-38 in three years as head coach of the Rams and who’s defense this year was 28th in the league according to Football Outsiders. Jim Schwartz’s name has resurfaced as a the token “hot candidate,” whatever that means, as has Todd Haley’s, who couldn’t even make it through a third season when he was the head coach in Kansas City and even accused management of having his office bugged.

And out of all the names mentioned above, he’s probably the brightest.

‘Tis the season of the retread, and of analysis of the retreads, and of college coaches and coordinators and hot seats and hot candidates and hot takes and other temperate terms which turn the ever-growing herd of NFL insiders on.

So Mike Shanahan’s name is thrown into the mix, and with it comes talk about his two Super Bowl titles and how there is data that shows that coaches improve with each new gig. Then again, you could also bring up the miserable job he did in Washington, where he kinda/sorta ruined Robert Griffin III’s career, set the house on fire and just walked out.

We can do a similar dance with Holmgren. The time in Green Bay was wonderful. And Seattle. Then he went to Cleveland, albeit in a front-office only position, and accomplished the seemingly impossible: he actually made Clevelanders feel worse about Cleveland being their hometown.

Other coaches who had success in their second go around: Dick Vermeil, Tom Coughlin, John Fox and let’s even throw Norv Turner in there. Bill Belichick obviously belongs in this group, and Pete Carroll, too.

But what about Herm Edwards and Wade Phillips and Ken Whisenhunt? Are they, and the multiple chances they’ve gotten, the outliers or actual proof that all the men being paid millions of dollars to make these sorts of decision are actually just blindly chucking darts at the wall? 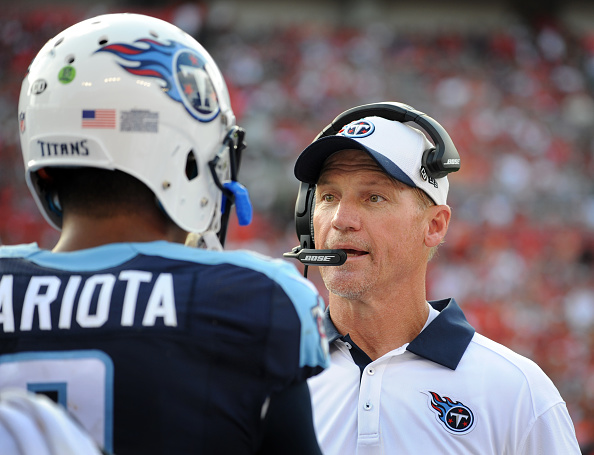 And really, who could blame them? After all it’s not like most of coaches pitching themselves as super innovative genius leaders aren’t doing the exact same thing. Take Andy Reid, for example. He builds his entire offense around Jamaal Charles and gets off to a 1-5 start. Charles then then goes down with a season-ending injury, which then, somehow, leads to an offensive surge and a 10-game win streak. Now Reid is being showered with praise and held up as an example of how retreads coaches can be successful. All because his bell cow, the player who Reid no doubt would have said beforehand he could not afford to lose, went down.

Seattle followed a similar blueprint this year. Marshawn Lynch, the heart of the offense, gets hurt, and suddenly Russell Wilson morphs into Steve Young 2.0. Does this mean Seattle’s previous offense was actually holding Wilson back? Does Carroll and his offensive staff deserve credit for his quarterback developing into an MVP candidate even though it’s pretty clear it happened accidentally? 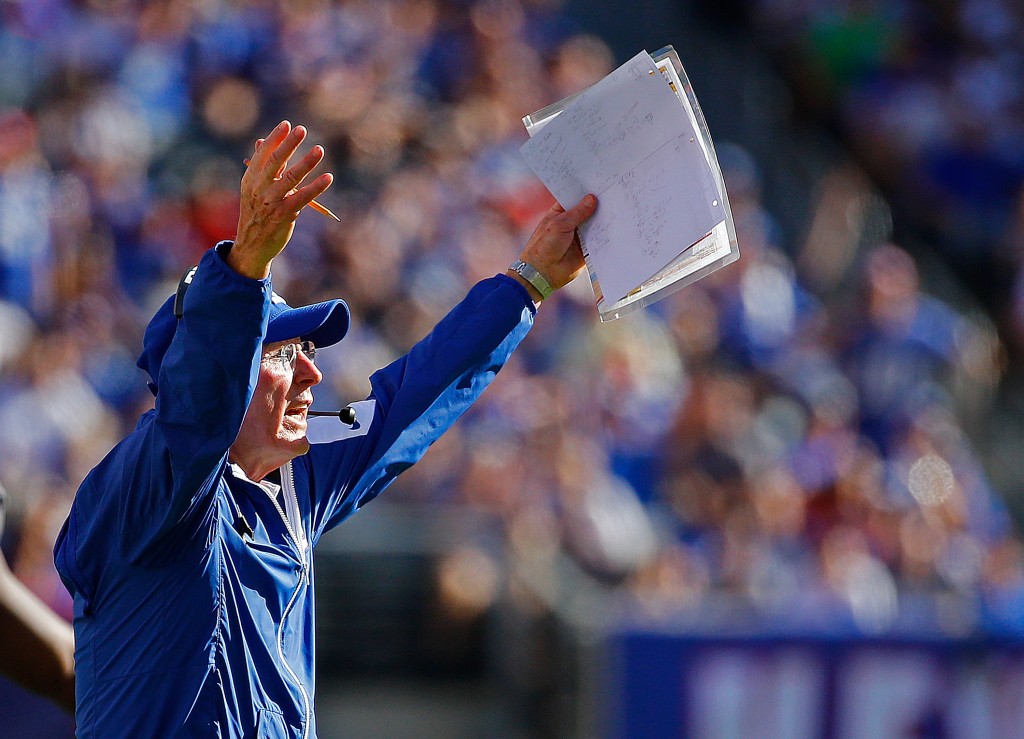 Just remember all this over the next few weeks, as countless amounts of words and energy are spent debating the value of myriad coaching candidates. A week ago Tom Coughlin was a buffoon who was slipping in his old age and letting the inmates, AKA Odell Beckham Jr., run the asylum. Now, following his fiery, bromide-filled goodbye press conference, he’s the second coming of MLK.

This is the end of an era. The end. Tom Coughlin is an amazing man who happened to coach football. #NYG

Tom Coughlin will/should get calls from major industries to be a CEO off this press conference. This man was born to lead

Whatever the reason, we, as football fans, are being taken for a ride. By a majority of the media, which has no qualms about feeding this appetite for coaching rumors and building up the myth that is the Savior Coach. By the teams, constantly pretending that hiring some big name coach or some re-tread who learned from past experiences, is the answer to all that ails.

And by the coaches themselves, a group of men who never mention luck yet require lots of it in order to succeed.