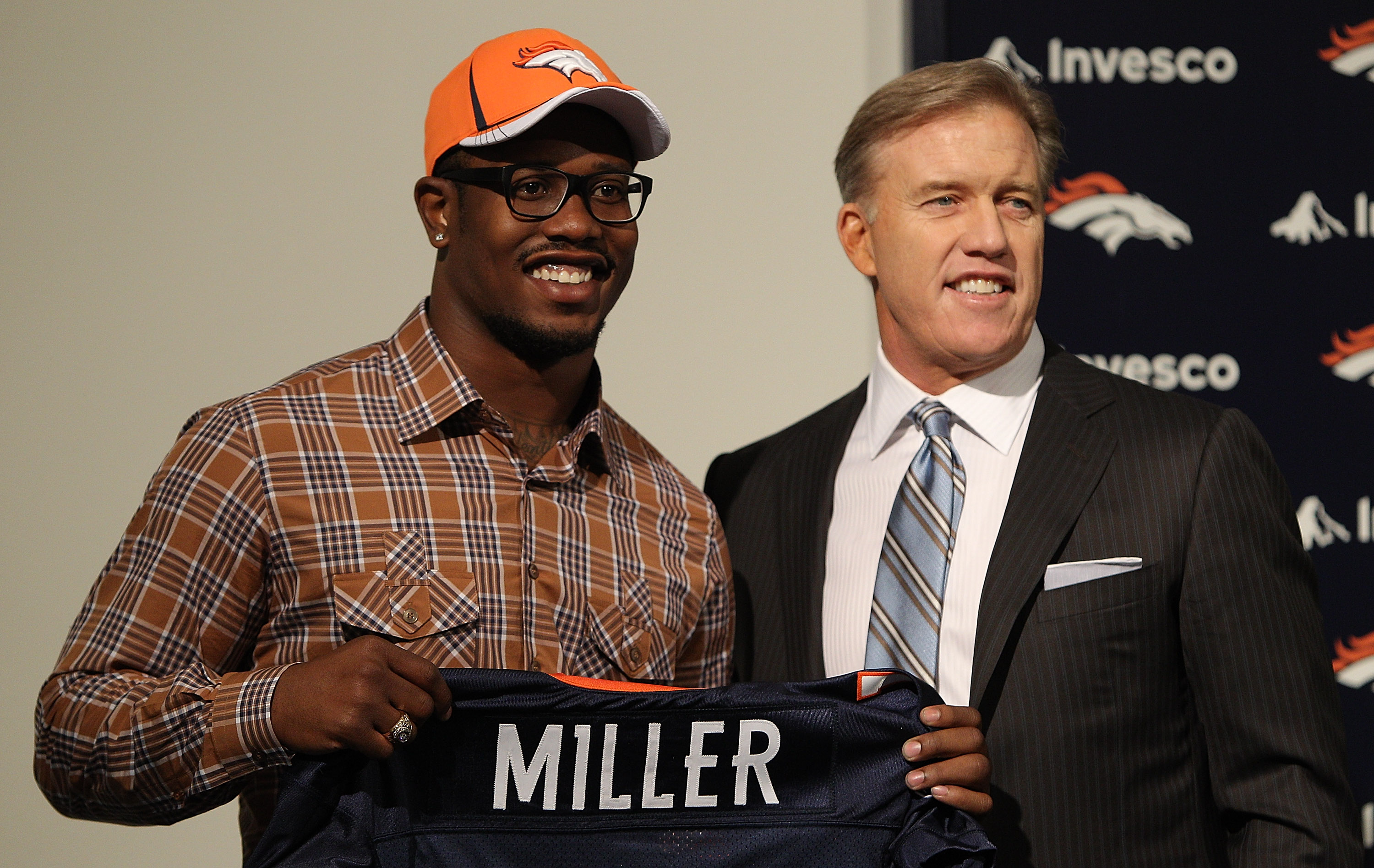 For seven NFL players, July 15 is an important date. For these seven, who have been given the franchise tag for the 2016 season by their respective teams, that July 15th date marks the end of contract negotiations; either the players have long-term deals in place or will have to wait until after the season to get one done, whether with their current teams or someone new.

While the franchise tag provides a big-ticket payday, it does so for only one year. There is no job security guaranteed by the tag and given the risk of injury or a decline in production over the next six months, players are far more interested in using the tag as an immediate springboard to contract negotiations and not a short-term solution to a long-term problem.

Time, however, is rapidly ticking down for these seven players. Where do things stand now? Here’s a primer on who has been tagged and whether 11th-hour deals with these players are imminent.

Super Bowl MVP Von Miller is easily the highest-profile of the tagged players, given he’s one of the top defenders in the league. Even though his presence on Denver’s defense is crucial to their 2016 season, Miller and the team have not been able to come to an agreement on a contract, though not for lack of trying.

The sticking point has been the guaranteed money as well as the timeframe for those guarantees to trigger. Miller wants $60 to $70 million in guaranteed money over the course of the first three years of the contract; the Broncos, meanwhile, have mostly offered two-year guarantees with the 2018 season’s salary guaranteed on a certain date in that year. It’s been a complicated game of chicken, with Miller threatening to sit out the entire season and remaining adamant that he will not sign the $14.129 million exclusive franchise tag.

ESPN’s Dan Graziano believes that the Broncos and Miller will indeed come to an agreement on the guaranteed money and the way the payout is scheduled before Friday’s deadline. The Broncos certainly need him this year, given the numerous other free agents that headed out during the offseason, including quarterback Brock Osweiler. This is a drama that could resolve swiftly or one that could continue to play out throughout the season, depending on what happens between now and Friday. 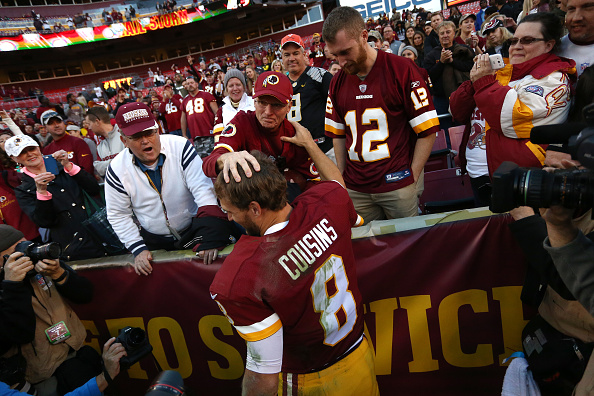 There is far less controversy surrounding Washington’s decision to franchise-tag quarterback Kirk Cousins. Indeed, the move makes strategic and financial sense. Cousins has spent only one season as Washington’s full-time starter, and though he had a strong showing in 2015, completing 69.8 percent of his passes for 4,166 passing yards and 29 touchdowns versus 11 interceptions, the small sample size requires a conservative approach to his contract situation.

In 2016, Cousins will make $19.95 million on the franchise tag—a huge increase in salary compared to the $660,000 he made in 2015. The tag for quarterbacks will rise to $23.94 million in 2017, so Washington now has the upcoming season to determine whether Cousins is worthy of a second tagged season, a long-term contract at the NFL’s current going yearly average ($20 million per year), or if 2015 was indeed an outlier.

Washington has little incentive to currently extend a contract to Cousins and Cousins has no reason to balk at the franchise tag salary given what he has made in past seasons. If Miller is the man to watch over the coming days, Cousins is the one to watch during the 2016 season. He earned the tag, but now can he earn the contract?

Like Von Miller, Muhammad Wilkerson is one of the top defenders in the NFL today. And like Miller, he and his team—the New York Jets—have seen their relationship ice over in the preceding months. Though Wilkerson has been franchise-tagged, he has yet to sign it as the 2015 Pro Bowler has been waiting with ever-waning patience for a long-term contract for the past two years.

Wilkerson has expressed the belief that the Jets “don’t want” him, adding, “they are willing to let me walk or whatever the case may be.” Despite that bitterness, Wilkerson is not threatening a holdout like Miller.

While Wilkerson is a talented player and is clearly frustrated, the fact that he has expressed willingness to play out 2016 on the $15.7 million franchise tag puts the leverage in the Jets’ corner. Further, he is coming off of a broken right leg suffered in the Jets’ season finale, another reason for the team to pull back on contract negotiations. It’s possible a contract is successfully negotiated before the July 15 deadline, but it seems more likely that Wilkerson will play the 2016 season under the one-year tag.

Alshon Jeffery may be “the man” in the Chicago Bears receiving corps this year, but that doesn’t mean that he and the Bears will get a long-term deal done before the July 15 deadline. It’s highly likely that Jeffery earns the $14.6 million prescribed to him by the franchise tag and that the Bears wait until the offseason to make a decision about the wideout’s future.

The issue is multilayered. There’s the fact that Jeffery was not drafted by general manager Ryan Pace. Also, Pace has proved more than willing to move on from seemingly-entrenched skill position players in recent history, including receiver Brandon Marshall, running back Matt Forte and tight end Marcellus Bennett, rather than offer high-value contracts to get them to stay. Further, Jeffery has an injury history that has resulted in just one 16-game season completed in his four-year career; he missed seven games in 2015. All of this adds up to 2016 essentially being a prove-it year for him in Chicago.

Jeffery needs to show his bosses just how invaluable he is to the Bears’ offense this year in order to get the long-term job security he desires. Though hitting free agency may not be that big a blow to Jeffery’s future earning potential, a big season in Chicago will help him remain with the team he’s spent his whole career with up to this point. Production and health are the two keys to Jeffery’s future.

Of all of the players handed the franchise tag this year, it seemed that Kansas City Chiefs safety Eric Berry would be the one to get a long-term deal done before the July 15 deadline. However, on Wednesday, NFL Network’s Rand Getlin reported that “absent a significant shift,” the two sides are “unlikely” to come to an agreement in time. This means Berry, the NFL’s Comeback Player of the Year (and now ESPY Best Comeback Athlete award-winner) after defeating Hodgkin’s lymphoma, will be earning $10.8 million this year on the one-year tag.

Berry said earlier in the month that he “thought [talks] would progress a little bit more,” though he also noted that, “a lot can change for whenever the deadline is.” Indeed, the Chiefs came to a last-minute agreement with then-tagged linebacker Justin Houston in 2015, but at this point, it doesn’t appear that history will repeat itself.

This isn’t a sign of Berry’s Kansas City tenure coming to an end, however. The Chiefs makes a point to reward and retain key members of their roster. A sticking point will certainly be the contract inked between the Minnesota Vikings and safety Harrison Smith, a five-year extension with a maximum value of $51.25 million. That will be the jumping-off point to make Berry the highest-paid safety in the league, but it’s looking more and more likely that it will have to wait until 2017.

Los Angeles Rams cornerback Trumaine Johnson isn’t likely to get a long-term agreement in place before the July 15 deadline. Though the Rams bet big on him, giving Johnson the $13.952 million franchise tag instead of retaining fellow corner Janoris Jenkins, they aren’t yet willing to lock him down for the long term.

Both sides have negotiated in good faith in the previous months and there is no sign of hostility out of Johnson’s camp, meaning that a holdout isn’t imminent. But neither is a contract. With the cornerback market continuing to command significant money, the Rams seem more than content with the wait-and-see approach.

Another big year for Johnson—who ranked third in interceptions (seven) in 2015—will certainly let him follow in the footsteps of numerous cornerbacks who have been handsomely-compensated in recent years. Still, interceptions are a fickle stat and Johnson will have to also prove his on-field leadership skills and all-around defensive prowess to join the ranks of Jenkins and other corners who have seen ballooning salaries over the past three years.

The Baltimore Ravens and kicker Justin Tucker’s camp have been relatively quiet about the negotiations taking place between both sides. While Tucker said in June that “it’s a matter of when, not if” the contract gets inked, and that there is still “optimism” about it getting done before Friday’s deadline, the Baltimore Sun’s Jeff Zrebiec says that “there’s no indication a deal is imminent.”

Tucker is one of the most accurate kickers in the league, with a conversion rate of 87.8 percent on field goals and a perfect record on extra points. He is second only to the New England Patriots’ Stephen Gostowski when it comes to performance over the last four years. Last year, Goskowski signed a four-year, $17.2 million contract that includes a position-high $10.1 million in guaranteed money. With a $4.3 million per-year average, that’s not far off from the $4.572 million Tucker is making on the franchise tag in 2016. Thus, Tucker’s new deal will set the market for kickers, which is likely why these negotiations have been more complicated than usual.

The “when, not if,” situation could thus extend until January. Baltimore is not likely to let their not-so-secret weapon be a free agent in 2017; it’s just a question of whether the two sides can come to an agreement in time for the July 15 deadline or if that agreement will have to wait until the season is over.