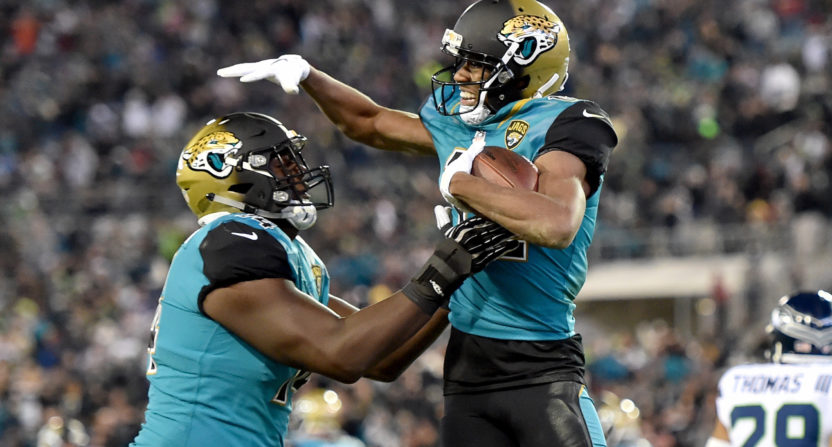 It’s crazy to think that only three weeks remain in the 2017 NFL regular season. In less than a month, half of the league’s fans will not get to watch their favorite team play in a meaningful game until next September.

But for at least 12 teams around the NFL, these next three weeks are vital in their quest to Super Bowl 52. A number of games in Week 15 will definitely have a tremendous impact on how the upcoming postseason will play out.

For absolutely everything that will be going on around the league in Week 15, we have a handy little guide down below that features the full game schedule, the announcers for each matchup, and their respective TV maps.

Broncos notes – Since Denver promoted Bill Musgrave to be the team’s offensive coordinator in Week 12, the Broncos’ offense has only been averaging 253 total yards per game. With Mike McCoy leading the offense in the team’s first 10 matchups of the season, Denver averaged 329.8 yards per game.

Colts notes – Through 13 games this season, Indianapolis has only thrown 11 touchdowns. Unless the Colts have some sort of offensive resurgence over the next three weeks, it will likely be just the second time the franchise has finished with less than 20 passing touchdowns in a season since 1997.

Bears notes – By defeating the Cincinnati Bengals on the road last week, Chicago captured a win away from home for just the second time all season. Since winning five of their eight road games in 2015, the Bears are just 2-12 in their last 14 matchups outside of their home stadium.

Chargers notes – Los Angeles receiver Keenan Allen needs just one more game this year with at least 100 receiving yards to break the franchise record for most 100-yard games in a single season. Allen currently has six this year, which is tied for the most in one season in Chargers history with Vincent Jackson, who accomplished the feat in 2009.

Chiefs notes – Last week against the Oakland Raiders was the fifth time in the career of Kansas City Chiefs quarterback Alex Smith that he threw for at least 250 yards on at least 30 pass attempts, while not throwing a single touchdown. All such games have come with Smith as a member of the Chiefs and last Sunday was the first time the quarterback led his team to a win in one of these particular games since 2013.

Texans notes – Sunday’s matchup in Jacksonville will see Houston start their third different quarterback this season when T.J. Yates takes the field. The last time Yates started a game in the NFL was back in 2015 when he led the Texans to a Week 15 win over the Indianapolis Colts.

Jaguars notes – This may have sounded pretty crazy before the start of the season, but Jacksonville can actually clinch a spot in the AFC playoffs with a win over Houston on Sunday. If so, it would be the first time the Jaguars would be playing past Week 17 since 2007.

Ravens notes – Baltimore has only lost to Cleveland twice since 2008. The last time the Ravens lost on the road to the Browns was in 2013 when Cleveland quarterback Jason Campbell threw for 262 yards and three touchdowns.

Browns notes – Would Cleveland getting their first win of 2017 this Sunday over Baltimore not be the ultimate revenge game? Before the Browns became a franchise again in 1999, former owner Art Modell moved the team to Maryland in 1996 and changed the franchise’s name to the Ravens.

Packers notes – For the first time since breaking his collarbone in Week 6, Green Bay quarterback Aaron Rodgers will be back starting under center for the team when they face Carolina on Sunday. The Packers need all the help they can get as they likely need to win each of their final three games to get a spot in the playoffs.

Panthers notes – With their win over the Minnesota Vikings last week, Carolina now has a shot to get a first-round bye in the upcoming postseason. On the other hand, the Panthers could lose the rest of their games this year and miss out on the playoffs all together. That’s pretty much the current NFC playoff picture in a nutshell.

Dolphins notes – Thanks to the current AFC playoff picture being wide-open, Miami still has a small chance to make it into the playoffs. According to FiveThirtyEight, the Dolphins have a six percent chance at capturing a postseason berth this year. A win in Buffalo on Sunday would increase that slim shot to about 15 percent.

Bills notes – After sitting out a week with a knee injury, it sounds like Buffalo will have Tyrod Taylor back as their starting quarterback on Sunday. The Bills are 9-7 in their last 16 games with Taylor as their starter.

Bengals notes – Cincinnati wide receiver A.J. Green needs just 50 more yards this season to go over the 1,000 receiving-yard mark for the sixth time in his seven-year NFL career. If he is able to accomplish the feat, he would tie the league record for most 1,000 receiving yard seasons by a player in his first seven years and join a group that includes Randy Moss, Jerry Rice, and Torry Holt.

Vikings notes – Minnesota can clinch a spot in the playoffs with a win over the Bengals on Sunday. A victory this week would also clinch the Vikings’ second NFC North title in the last three seasons.

Cardinals notes – Despite only winning two of the four games he has started this season, Arizona apparently is interested in keeping quarterback Blaine Gabbert around next year. Reportedly, the Cardinals have already contacted Gabbert’s agent about extending the quarterback’s current contract with the team.

Redskins notes – After catching 17 touchdowns from 2015 to 2016, Washington tight end Jordan Reed struggled to get anything really going this year thanks to a hamstring injury. Reed has not played since Week 8 and the Redskins announced on Tuesday that the tight end has been placed on injured reserve, ending his 2017 season.

Eagles notes – With Philadelphia losing quarterback Carson Wentz to a season-ending knee injury last week, the fate of their season will now rest on Nick Foles. The Eagles backup signal caller will make his first start under center since 2016 when he led the Kansas City Chiefs to a Week 9 win over the Jacksonville Jaguars.

Giants notes – As bad as New York has been this year, rookie tight end Evan Engram has been having a pretty impressive season. He currently leads all Giants players in catches (55), receiving yards (623), and touchdowns (six).

Jets notes – New York lost starting quarterback Josh McCown to a season-ending hand injury last week and will now be rolling with backup Bryce Petty on Sunday against New Orleans. Petty started four games for the Jets last year and his performance was nothing to brag about. The Jets were only able to win one of his starts as the quarterback completed just 56 percent of his passes, threw seven interceptions, and tossed just three touchdowns.

Saints notes – This may be hard to believe, but New Orleans earning their 10th win of the season on Sunday would not clinch the team a spot in the playoffs. Despite that, FiveThirtyEight still has the Saints’ chance at making the postseason this year at 92 percent.

Rams notes – If Los Angeles is able to get a victory over Seattle on Sunday and the Detroit Lions fall to the Chicago Bears on Saturday, then the Rams will lock up a slot in the NFC playoffs. It would be the first postseason berth for the franchise since 2004 and the first time an NFL team from Los Angeles would be a part of the playoffs since 1993.

Seahawks notes – With three games remaining, Seattle currently has a 57 percent chance to get into the playoffs according to FiveThirtyEight. If the Seahawks were unable to make it into the postseason this year, it would be the first time since 2011 that the team would not be playing extra football after the regular season.

49ers notes – It seems like an obvious statement to make, but San Francisco is clearly a better team with Jimmy Garoppolo as their starting quarterback. His numbers have not been amazing, but the 49ers’ offense is averaging 402 total yards in the past two weeks with Garoppolo under center, a big improvement when compared the 321.7 yards of total offense the team was averaging in the 11 games without him as the starting quarterback.

Patriots notes – If New England wins on Sunday or the Buffalo Bills or Baltimore Ravens lose this week, then the Patriots will be playoff bound once again. New England has missed the postseason just once since 2001 when quarterback Tom Brady has started 10 or more games in a season.

Steelers notes – Sunday is a big matchup for Pittsburgh as it could be an opportunity to clinch home-field throughout the AFC Playoffs. If the Jacksonville Jaguars lose earlier in the day to the Houston Texans and the Steelers are able to defeat the Patriots, then Pittsburgh would not have to play a game in the postseason away from their home stadium unless they make it all the way to Super Bowl 52 in Minnesota.

Cowboys notes – Thanks to winning their last two games, Dallas is still very much in the hunt for a spot in the NFC playoffs this season. It is possible that the Cowboys can get into the postseason with one more loss on their record, but two or more losses over the next three weeks would end Dallas’ shot at making the playoffs.

Raiders notes – The AFC is so wide open heading into Week 15 that Oakland can still possibly finish fourth in the AFC and host a playoff game. A bunch needs to go down for this to happen, but there are scenarios in which the Raiders can even lose one of their final three matchups and still win the AFC West.

Falcons notes – With two of their final three games this season on the road, getting into the playoffs is certainly not going to be an easy task for Atlanta. Especially since they end their year with matchups against the New Orleans Saints and Carolina Panthers.

Bucs notes – Tampa Bay has not played on Monday night very often in the past decade, but they have made the most of their infrequent opportunities in front of a national audience. In their last three Monday night matchups, the Bucs have been victorious in each game and the team’s last loss on a Monday was back in 2008 to the Carolina Panthers.

1 thought on “Your NFL guide for the 2017 Week 15 schedule, broadcast maps, and announcers”