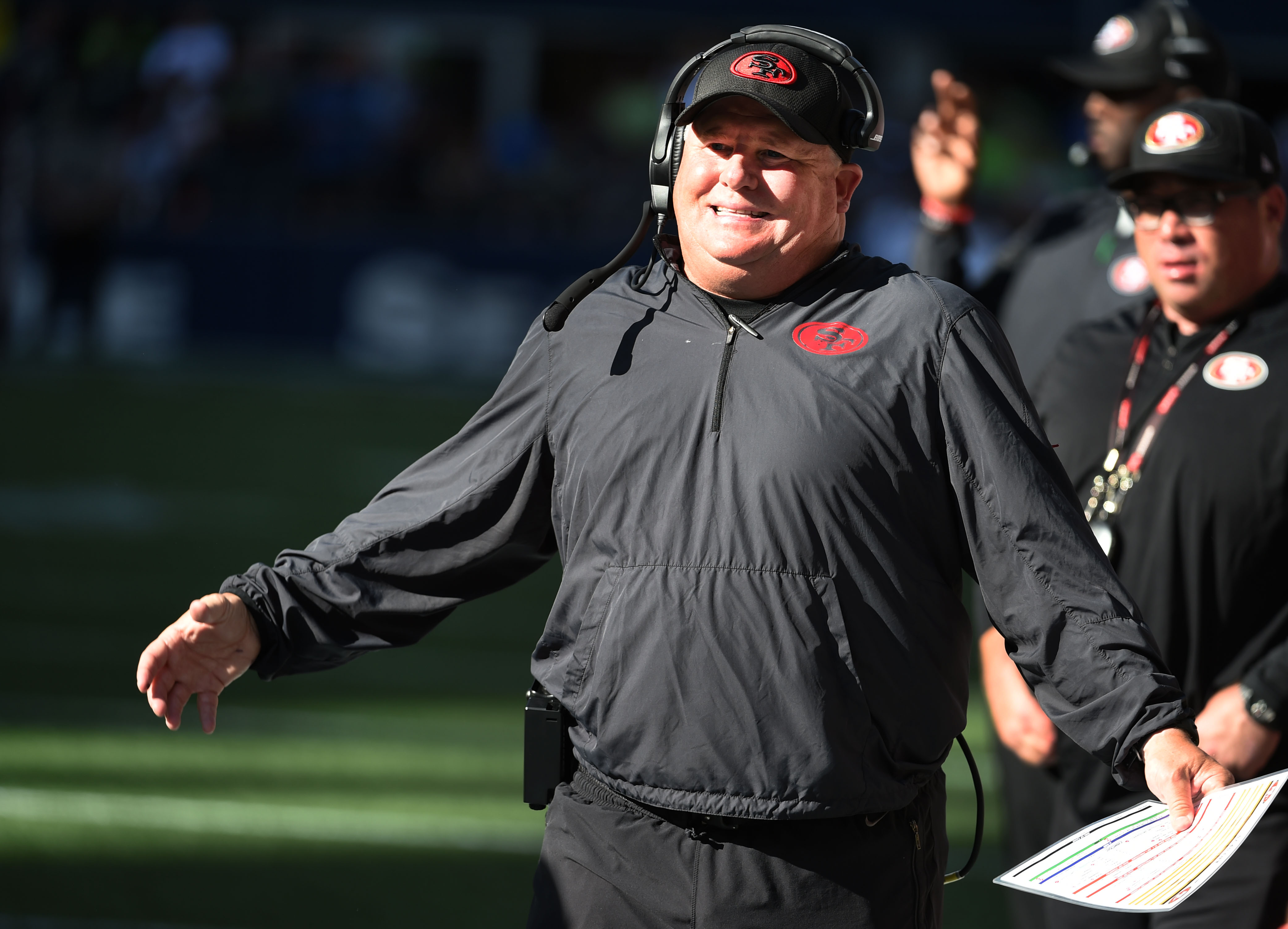 The NFL’s Black Monday — the Monday following the close of the regular season that typically marks the day head coaches lose jobs — is well over a month away. But with the 2016 season in double-digit weeks, coaches of struggling teams are running out of time to turn their fortunes around and maintain job security for another year.

While few jobs are ever considered safe in an league whose acronym is often referred to as “Not For Long,” some seats have heated up more than others. Here are the six coaches who need to close out 2016 strong in order to remain at the helm for at least one more year.

You have to hand it to Jacksonville Jaguars owner Shahid Kahn. Most relatively-newer owners of NFL teams are rarely as patient as he has been with his coaching staff. Owner since 2011, he has installed Gus Bradley as his head coach since 2013 and allowed him and his front office to rebuild both the offense and defense, giving both sides of the ball time to develop. The only problem? The Jaguars have won only 14 games under Bradley’s staff, and have two wins and seven losses so far in 2016.

This year’s Jaguars have been outscored 174-to-239 and quarterback Blake Bortles has regressed as a passer, with 16 touchdowns thrown to 11 interceptions despite having weapons like Allen Robinson, Allen Turns, T.J. Yeldon, and Marqise Lee at his disposal. At some point, patience must wear thin. Bradley finally seems headed to be out of a job. Meanwhile, Bortles could be out of town in 2018 once his rookie contract expires.

Chip Kelly’s up-tempo offense lip service, unorthodox preparation style and, most importantly, his manner of personnel control quickly wore out his welcome with the Philadelphia Eagles. Now it looks like more of the same with his new team, the San Francisco 49ers. So far, Kelly’s Niners have one win to eight losses and have weathered repeated quarterback controversies, all in Kelly’s first—and perhaps sole—season.

The 49ers have proven willing to make quick changes at the head coaching job, from the “conscious uncoupling” that Jim Harbaugh had with owner Jed York and general manager Trent Baalke following the 2014 season and the one-and-done year for Jim Tomsula that followed. With Kelly not able to rehabilitate the careers of Blaine Gabbert, Colin Kaepernick or, at least to this point, Christian Ponder, and his defense ranking last in the league in both yards and points allowed, Kelly may have to consider heading back to college.

Though he denied interest in doing so, even if Oregon’s Mark Helfrich loses his job, he may start listening to offers if the wins continue to be hard to come by in San Francisco.

There may be one way that John Fox can save his job and remain the Chicago Bears’ head coach for at least another year: Moving on from quarterback Jay Cutler in the offseason. After Cutler lost his job due to injury and then due to a six-touchdown, zero-interception span for backup Brian Hoyer, the Bears began to look a bit more competitive as a whole. Though defense was an issue and connections with receiver Alshon Jeffery did not produce the kind of touchdowns they have in seasons past, the Bears looked like a team making some degree of progress.

But then Hoyer injured his shoulder, ending his season, giving Fox “no choice” but to start Cutler once again (Cutler’s words). Though the veteran’s return did give the Bears their second win of the season, Cutler’s Week 10 performance against the Tampa Bay Buccaneers (53.3 completion percentage, one touchdown thrown to two interceptions, 182 passing yards) in a 36-10 loss proves that whatever “it” Cutler may have had in the past could be long gone.

Cutler’s 2107 salary cap hit is $16 million but it would cost the Bears only $2 million to cut him, making the quarterback a perfect scapegoat for an imperfect season. But could Fox be out the door as well? It depends on whether the Bears’ brass thinks quarterback is the most glaring issue or if coaching also has played a large role. Chicago is currently winless on the road and has been outscored by 74 points thus far. Not all of that hinges on Cutler, which puts Fox squarely on the hot seat.

In Chuck Pagano’s first three seasons as the Indianapolis Colts’ head coach, a span that began in 2012 when the team drafted quarterback Andrew Luck with the No. 1 overall pick, the team always finished the year 11-5. But in 2015, the Colts were just 8-8 and Luck missed nine games with various injuries. The draft, aside from the selection of Luck and little else, hasn’t been strong enough to lift the entire team around the quarterback and it seemed that both Pagano and general manager Ryan Grigson were set to be canned in the 2016 offseason.

However, both Pagano and Grigson were retained by owner Jim Irsay, hoping that the two would use the job-security scare as a way to work together and galvanize their roster. But even with a healthy Luck under center, the Colts are 4-5 in a still-weak AFC South division. The Colts should have found ways to pull away from their competition, but aside from a productive, Luck-led passing game, the Colts have little else. Their defense ranks 29th in points allowed and 30th in yards. That’s an indictment of Pagano, a defensive-minded coach who came to the Colts from the venerable Baltimore Ravens.

It can’t help but seem Irsay’s choice to keep Pagano and Grigson for 2016 was a charitable last-chance given to both men. As of now, it looks like Luck may have to prepare himself for a coaching change (and front-office reconfigure) most of us saw coming a year ago.

Green Bay Packers head coach Mike McCarthy has only one losing season since taking the job in 2006 and from 2009 through 2015 coached a team that has reached the postseason, including a Super Bowl victory. A coach with this pedigree should not be worrying about his job security, but a 4-5 record in an NFC North that has so commonly been theirs has his seat heating up considerably.

From switching up play-calling duties to quarterbacks coach Tom Clements last year, and then taking them back this year, to the numerous slow starts that have forced quarterback Aaron Rodgers and the offense to play catchup, to their 1-3 road record and 1-2 in the division, this is no longer the juggernaut it once was and someone will have to take the fall.

It’s possible that that man is defensive coordinator Dom Capers, who has helped contribute to the Packers’ minus-11-point differential as much as the offense has (last year, the Packers were plus-65 and in 2014, plus-138). Green Bay has allowed 30 or more points to opponents four times this year, including their last three, the latest being Week 10’s 47-25 drubbing at the Tennessee Titans. Further, many of the Packers’ struggles can be tied to injuries, particularly at running back, which forced McCarthy to install an amazing 21 personnel groups to play against the Titans.

But Green Bay’s identity is the offense and McCarthy appears to have lost his way this year. That could signal a need for change after this season in order to get the most out of the players (particularly Rodgers) that has been lacking in 2016.

No list of coaches on the hot seat would be complete without the head coach of the only winless team left in the league. That man is Hue Jackson, who is in his first year of helming the Cleveland Browns. The Browns are 0-10 and are getting dangerously close to being just the second team to go 0-16 in the regular season, other than the 2008 Detroit Lions.

Jackson is Cleveland’s ninth head coach since the team returned to the league in 1999; to do the math, that is an average of one new head coach ever two seasons. That lack of continuity is one reason to assume that Jackson’s seat isn’t as hot as it would be had this been his third or fourth season with the Browns. The other is the long-term rebuilding project the Browns have been undergoing since Jackson’s hire last winter. The Browns drafted 14 players in the spring, let numerous veteran free agents move on, and revamped their approach to player evaluation. They also have stockpiled draft picks for the future as another way to achieve their vision.

But this isn’t the first Browns rebuild. Based on how the past attempts have gone, it may not be the last. For all the patience that Jackson has claimed Browns owners Jimmy and Dee Haslam have in him, his ownership has already moved on from two coaches.

Based on the magnitude of the changes the Browns have made so far and those that are to come, the Haslams would be smart to give Jackson more time. At least another season, if not longer, to try to realize this long-term vision. But it’s a win-now league, no matter what Jackson and the Browns have been saying so far this year. Retaining a winless head coach will certainly be unpopular even if it turns out to be the right move.