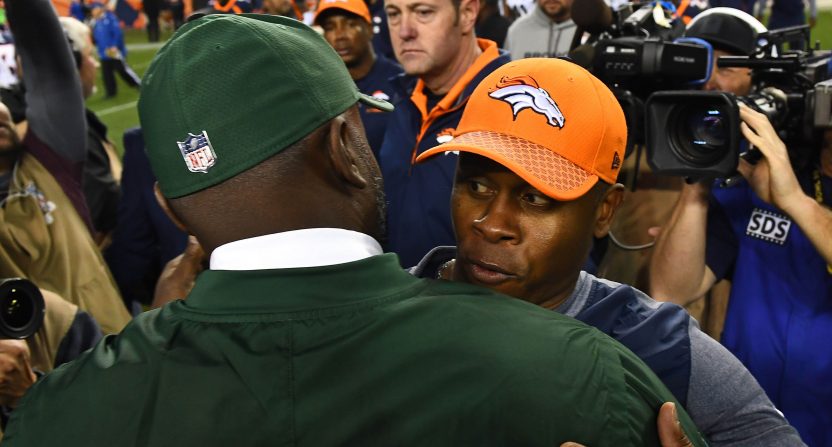 You know that adage about defense winning championships? It’s becoming harder to convince NFL owners and general managers of that.

Seven of the last eight Super Bowl winners possessed top-10 offenses, while multiple teams — including Super Bowl squads like the 2009 Saints, 2011 Giants and 2016 Falcons — have gone on deep playoff runs despite poorly-ranked defenses.

And with the league experiencing an offensive explosion over the last decade or so, it’s become obvious that the majority of its teams prefer offensive-minded head coaches.

Belichick, Tomlin, Carroll, and Rivera are among seven head coaches with tenures of eight or more years, which means that only six current defensive-minded head coaches were hired in the last seven years. That number will increase to seven if — as expected — the Miami Dolphins hire current New England Patriots defensive coordinator Brian Flores at the conclusion of New England’s season. But with all signs pointing to the Cincinnati Bengals hiring current Los Angeles Rams quarterbacks coach Zac Taylor at the conclusion of L.A.’s season, that would still leave us with just 34 percent of the NFL’s head coaches specializing in defense.

Three defensive-minded head coaches were hired last offseason, but one — Steve Wilks — has already been fired by the Arizona Cardinals. The other two — Matt Patricia of the Detroit Lions and Mike Vrabel of the Tennessee Titans — could already be on thin ice after missing the playoffs. Meanwhile, offensive-minded first-year head coaches Matt Nagy and Frank Reich led overachieving teams to the postseason right off the bat.

Only one of the six head coaches hired in 2017 has been fired, and that was the defensive-minded Vance Joseph (canned in Denver after two disappointing seasons). Meanwhile, four offensive-minded head coaches from that hiring round — Kyle Shanahan, Sean McVay, Anthony Lynn and Doug Marrone — have experienced various degrees of success and look secure. The hottest seat among that class probably belongs to its only other defensive-minded hire, Sean McDermott of the Buffalo Bills.

Six of the seven head coaches hired in 2016 have already been relieved of their duties, but the one success story — Doug Pederson of the Philadelphia Eagles — comes from an offensive background.

Maybe this stems from 2015, when six of the seven new hires came from the defensive side of the ball. Five of those six — Jack Del Rio, John Fox, Jim Tomsula, Rex Ryan, and Todd Bowles — are goners, while the only offensive coach from that hiring cycle — Gary Kubiak in Denver — left on his own terms with a strong reputation.

So this probably comes down to the fact few defensive-oriented head coaches have succeeded of late, as well as the fact offense is becoming the league’s only priority.

Don’t expect that to change. After all, for first time ever, the four teams playing in the conference championship games this weekend ranked first, second, third, and fourth in the NFL in scoring during the regular season.