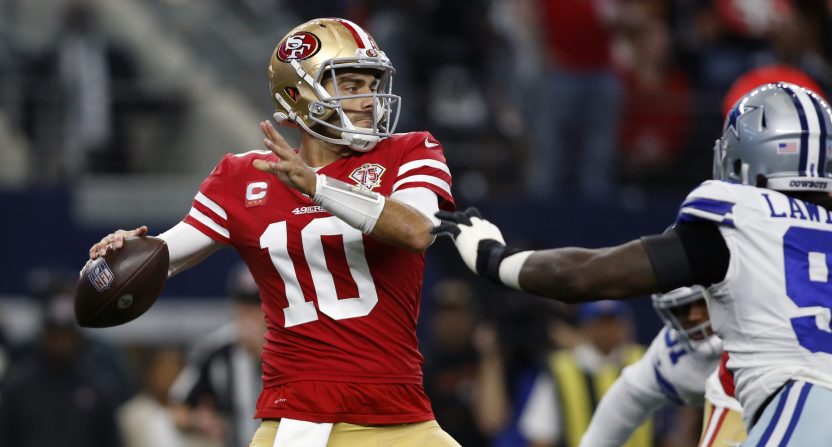 NBC Sports’ Peter King thinks that the San Francisco 49ers could get a premium trade return for quarterback Jimmy Garoppolo this offseason.

On Tuesday, King appeared on 95.7 The Game’s (Bay Area) Damon & Ratto, and the longtime NFL reporter said that he thinks that there’s a “very good chance” the 49ers could get a first-round pick in return for Garoppolo.

King added that “there’s no doubt in [his] mind that somebody will give up a [first-round pick]” for Garoppolo if the quarterback plays well in an NFC Divisional Round playoff win over the Green Bay Packers this weekend.

“I think there’s a very good chance that if the 49ers want to get a 1 for him, they could….certainly if they win this weekend and Garoppolo is good, there’s no doubt in my mind that somebody will give a 1 for him.” pic.twitter.com/Cwp51nipUU

King’s thoughts come on the same day an ESPN report emerged that an NFL executive predicted the Washington Football Team will trade for Garoppolo.

Garoppolo, 30, threw 20 touchdown passes, 12 interceptions, and put together a 98.7 passer rating for San Francisco in the 2021 regular season. His 12.7 yards gained per completion led the NFL (though superstar weapon Deebo Samuel certainly had something to do with that).

A first-round pick would seem to be a pretty steep price for Garoppolo, who enters the final year of his — five-year, $137.5 million — contract in the 2022 season. But NFL organizations certainly get desperate to upgrade at quarterback (as little else matters usually if you don’t have a good one), and this year’s draft class doesn’t offer any obvious solutions at the position, especially for organizations looking for quick fixes.

It’s been assumed that a 49ers-Garoppolo divorce is inevitable; after all, San Francisco traded three first-round picks to move up to the No. 3 pick in the 2021 NFL Draft, where they selected North Dakota State quarterback Trey Lance.

Now, Garoppolo could make the decision a bit more difficult for the 49ers if he’s able to keep winning in these playoffs. But if an organization is offering a first-round pick for Garoppolo, it’s hard to see San Francisco turning that down- the 49ers lack first-round picks in each of the next two drafts, and they likely want to accelerate Lance’s development in the 2022 season.