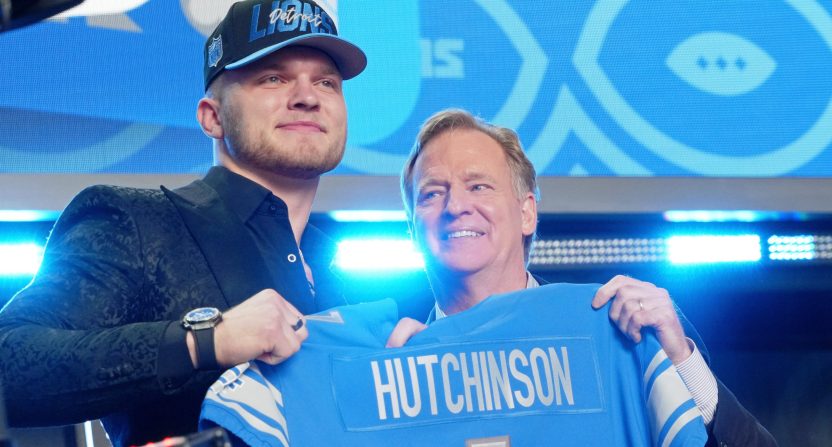 For an event that once consisted of a bunch of football coaches and executives on phones in a smoke-filled hotel conference room, the NFL Draft has become a mainstream TV event over the years. Tens of thousands of fans now congregate in a different NFL city each year to find out who their team is getting while millions watch on TV.

Because the draft is a TV event, it’s now a large-scale production where things are much more intricate than a team simply submitting a card whenever they’re ready to pick a player. Networks need to have time for analysis on the most recent pick, time for interviewing the player if they’re in attendance, time for previewing who might be chosen with the next pick and squeezing in commercials.

The Detroit Lions were reportedly a bit too excited with the second overall pick that a Lion official revealed to NBC Sports’ Peter King that the NFL got mad at the team for submitting the pick for Aidan Hutchinson within a minute after the Jaguars picked Travon Walker.

The night before the draft, in Vegas, Aidan Hutchinson’s sister, Aria, said as the pre-draft pressure was getting to everyone in the family: “Please, please, please let him get picked by Detroit!” Think of that. When’s the last time someone has wanted a loved one to go to the Detroit Lions? Night Train Lane? Joe Schmidt? The Hutchinsons live near Ford Field and are close, granted. But if they didn’t believe that the Lions had a chance to escape their hellhole, they’d never have been begging for Aidan to land there. The Lions felt similarly. After the Jaguars picked Travon Walker number one, the Lions told the league the pick was in, and it was Hutchinson—within a minute of the Walker pick. “We turned the card in so fast the league got mad at us,” said one Lion official.

To many fans, the Lions did them a favor. The NFL Draft can be overly bloated at times with a bunch of unnecessary fluff that the first round can last over four hours. The Lions immediately submitting their pick might be a sign of a team who knows, and is excited about, who they want and was being considerate of everyone’s time but this is now a TV event and that means stalling for time in order to make it a show. Just ask Ed Marinaro.