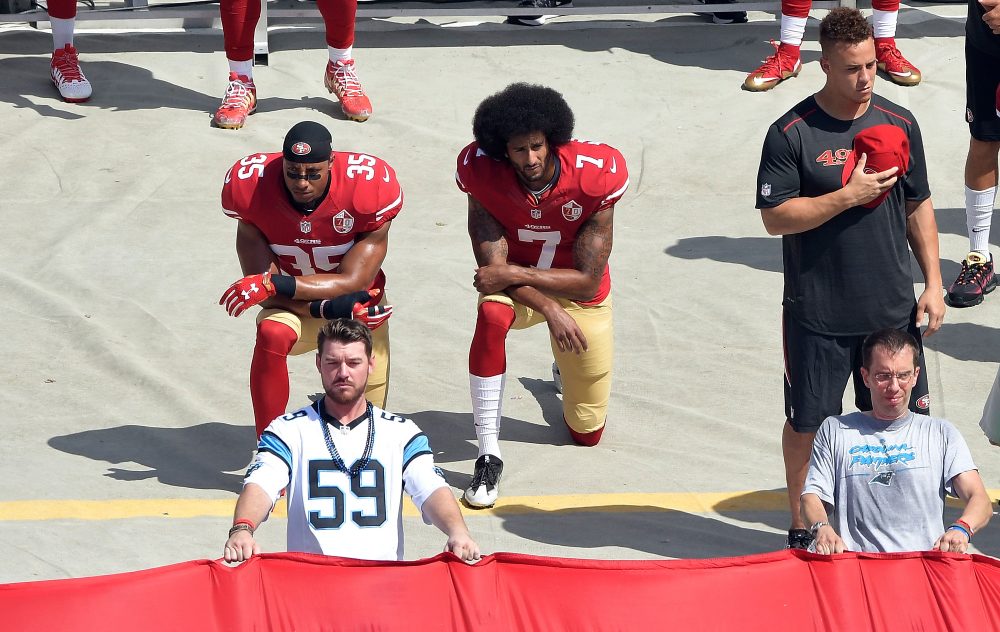 This week saw an important NFL story emerge in reverse order, revealing more of what went on in the October meeting between NFL players, owners and executives. On Monday, near the end of a New York Times story by Ken Belson and Michael D. Shear speculating if the Super Bowl champion Philadelphia Eagles would visit the White House, there was a previously unpublished quote from that meeting. That quote saw  Eagles’ owner Jeffrey Lurie call Donald Trump’s presidency “disastrous” (“using a vulgarity to emphasize ‘disastrous'”), and it was cited as “according to a recording of the meeting obtained by The New York Times.”

This was the first indication that there was a recording of that meeting, and it led to a lot of speculation about who recorded the meeting and what else went on there; the Times then published a story Wednesday (by Belson and Mark Leibovich) with many more interesting details from that meeting, especially when it comes to Colin Kaepernick and Eric Reid.

First, it’s worth discussing just what the Times is adding to the record here. That meeting had previously been covered by ESPN’s Seth Wickersham and Don Van Natta Jr. 10 days later with lots of details, including the “inmates running the prison” quote from Houston Texans’ owner Bob McNair that drew tons of attention and sparked further protest, and those details came from “nearly two dozen interviews Outside the Lines conducted with owners, league and team executives, players and lawyers briefed on the two days of closed-door meetings.”

But while that piece summarizes what went on and includes some direct quotes, it’s not a full record of the discussions. The Times appears to have that, and while their own piece is far from a full transcript of the meeting, it carries notable details that hadn’t yet come to light, specifically around the Kaepernick discussion.

The players sounded aggrieved. After discussing a proposal to finance nonprofit groups to address player concerns, they wanted to talk about why Colin Kaepernick, the quarterback who started the anthem protests to highlight social injustice and police brutality against African-Americans, was, they believed, being blackballed by the owners. The owners sounded panicked about their business under attack, and wanted to focus on damage control.

“If he was on a roster right now, all this negativeness and divisiveness could be turned into a positive,” Philadelphia Eagles defensive lineman Chris Long said at the meeting.

Long said he did not wish to “lecture any team” on what quarterbacks to sign, but “we all agree in this room as players that he should be on a roster.” The owners’ responses were noncommittal. The Eagles owner Jeffrey Lurie said that fighting for social justice is not “about one person.”

…After the Miami Dolphins owner Stephen Ross raised the idea of a “march on Washington” by N.F.L. players and owners, Eric Reid, Kaepernick’s former teammate and the first player to kneel alongside him, brought the discussion back to Kaepernick.

Reid, who attended the meeting wearing a Kaepernick T-shirt over his dress shirt and tie, said that his former teammate was being blackballed.

“I feel like he was hung out to dry,” Reid said of Kaepernick. “Everyone in here is talking about how much they support us.” The room fell quiet. “Nobody stepped up and said we support Colin’s right to do this. We all let him become Public Enemy No. 1 in this country, and he still doesn’t have a job.”

…Kaepernick’s name was not mentioned again. He continues to pursue a labor grievance accusing the owners of colluding to keep him out of the league. He remains unsigned.

In a lot of ways, that illustrates how unresolved much of this tension still appears to be. Since then, Kaepernick not only hasn’t found a NFL job, but Reid also has gone without a contract, despite compelling proof that he can be a high-level NFL player.  It’s hard not to connect his lack of a NFL contract to his decision to join Kaepernick’s protest early on and his decision to advocate for his former teammate. And while the Times account of that meeting overall, like the ESPN one before it, shows that the owners and players were able to have some conversations, it also is further proof of many owners not at all on the same page with players.

There are a lot of cases of that. Buffalo Bills’ owner Terry Pegula’s comments about the joint efforts here needing a black spokesperson were partly covered in the ESPN piece, including the cringes they drew, but they were overlooked by many thanks to McNair’s comments. Pegula’s remarks are discussed in more detail in the Times account, including his remarks of “we need to put a Band-Aid on what’s going on in the country” and his combinations of nautical metaphors. McNair himself has a comment in there of “You fellas need to ask your compadres, fellas, stop that other business,” (kneeling), and New England Patriots’ owner Robert Kraft also pushed for an end to that.

While this account of the meeting largely expands on the themes we already knew happened, the details are important, and they show perhaps how little actual progress was made despite the joint NFL-NFLPA statement. For the moment, the main tangible impact of that meeting appears to be that Reid’s advocacy for Kaepernick landed him out of the league next to his former teammate.