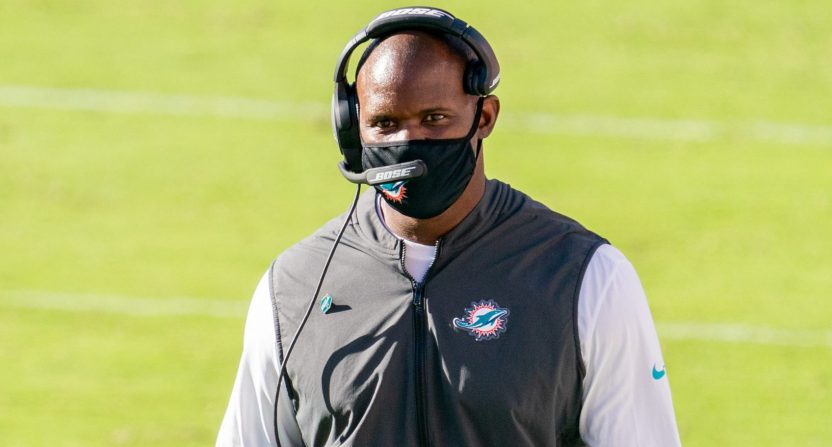 With the NFL season now just more than 50 percent complete, this seems like an appropriate time to hand out on-the-fly awards based on the first nine weeks of the 2020 campaign.

There’s a hell of a campaign for Seattle Seahawks quarterback Russell Wilson to at least earn some MVP votes for the first time in his career, and he’s certainly still in the picture after arguably leading this race for much of September and October. He has less support than both Mahomes and fellow top-tier candidate Aaron Rodgers of the Green Bay Packers. But Wilson’s trajectory is not as promising, as he’s now thrown five interceptions in his last three games, two of which were losses.

Wilson’s Seahawks are 6-2, as are Rodgers’ Packers. But Mahomes’ Chiefs are 8-1, and his 25-to-1 touchdown-to-interception ratio towers over both Wilson and Rodgers. He has a ridiculous 128.1 passer rating in his last four games, all of which were fairly easy, high-scoring victories.

He’s well on track to win his second career MVP at the age of 25.

Also in the running: Rodgers, Wilson

Offensive Player of the Year: Mahomes

I don’t believe in splitting this ballot unless there are extremely unique circumstances. That’s not the case yet, but keep an eye on Minnesota Vikings running back Dalvin Cook. Cook is on pace to become just the third player in NFL history to score 28 or more touchdowns in a season, and he’s on that track despite missing a game due to injury. He’s by far the hottest offensive player in the sport right now, and if that continues for awhile he could grab this award despite playing for a mediocre team.

This is basically a toss-up between Garrett and Los Angeles Rams defensive lineman Aaron Donald, who might face an uphill battle because of the bar he has set as a two-time winner of this award. There might be a sense that a tie should go to the 24-year-old Garrett, but both have exactly nine sacks to lead their respective conferences as linchpins on winning teams right now. Donald has two more quarterback hits than Garrett, but Garrett has forced four fumbles to Donald’s three.

Also in the running: Donald

A lot of good receivers are making an early impact and top pick Joe Burrow has started strong for the Cincinnati Bengals, but Herbert is running away with this thing. Herbert is the league’s ninth-highest-rated passer, and he ranks in the top 10 among qualifiers in pretty much every key category. He’s also been one of the best deep-ball throwers in the league and is among the most efficient passers on third down.

Very few rookies have consistently stood out so far so this remains a wide-open race. Young leads all rookies with 3.5 sacks but he’s been much more disruptive than that despite the fact he hasn’t been totally healthy. He gets the nod for now, but Tampa Bay Buccaneers safety Antoine Winfield Jr. has been all over the field, Patrick Queen has been all over the field for the Baltimore Ravens, and Jaylon Johnson has flashed his versatility for the Chicago Bears.

He should have won this thing for somehow getting five wins out of one of the worst teams in NFL history last season. Now, the Dolphins are better on paper but certainly not Super Bowl-caliber, and yet Flores has them riding a four-game winning streak and in playoff contention. They’re 3-1 against the tough NFC West, and as mentally strong as they come.

His numbers aren’t pretty, but the dude looked like he’d never have a realistic shot at playing again. Incredible story.