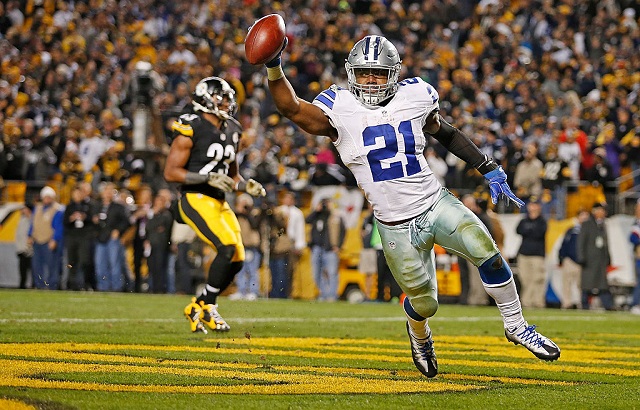 Week 10 might have been the best Sunday of NFL football in a season full of strong contenders, but it’s Monday morning now — and time for Quick Slants!

The Thursday night game was an AFC North travesty, as the mediocre Baltimore Ravens slow-motion steamrolled the awful Cleveland Browns. The early games kicked off with a little better effort from the same division, a 24-21 win for the Houston Texans that did more to confirm their unimpressiveness than polish the reputation of the Jacksonville Jaguars.

The Los Angeles Rams kept Jeff Fishering their way towards 7-9, with a soporific 9-6 win over the Jets. The Tampa Bay Buccaneers blew out the Chicago Bears in Tampa, saving them from tying their own 40-year-old record for losing a home game in three consecutive weeks.

Wait, didn’t I say this week was full of good football? Yup — and all the rest of it was aces.

It wasn't a dream. This. Really. Happened! https://t.co/QOdsPLiYqx

In Carolina, the Panthers ran out to a 17-0 lead, and seemed set to cruise it on in from there. But a funny thing happened on the way to extending their win streak: With 20 seconds left, Chiefs cornerback Marcus Peters just plain ripped the ball out of the hands of Panthers wideout Kelvin Benjamin, setting up Cairo Santos’ last-second game-winning field goal. The Chiefs improve to an improbable 7-2, while the Panthers drop to an all-but-eliminated 3-6.

The Superdome’s a tough place to get a win, especially when the Saints have won four of their last five. Bur Denver battled New Orleans closely for sixty minutes, taking, relinquishing and finally re-taking the lead in the fourth quarter. When Drew Brees miraculously split bracketed coverage for a game-tying touchdown with just over a minute left, it looked like the extra point would be the game-winner.

After review, the call of the field stands.

In Philadelphia, the Eagles hosted the Atlanta Falcons in a battle of two really good teams who have both lost a couple close games recently. As the Eagles keep finding ways to do, they slowed it down and controlled the ball, making Ryan Mathews’ opening-drive touchdown the only touchdown either team scored until the fourth quarter. Then this happened:

The Eagles didn’t shrink from the challenge, though, scoring 10 unanswered points and picking off Matt Ryan to seal a massive 24-15 win. They improve to 5-4 on the day, but get this: After wins by Washington and Dallas, even a Monday night loss by the New York Giants still won’t get the Eagles out of the NFC East basement (the Giants own the tiebreaker).
We’re just getting warmed up.

There was the Tennessee Titans’ unbelievable 47-25 demolition of the Green Bay Packers, which seemed to herald the end of the Mike McCarthy Era in Wisconsin. There was Minnesota hanging a 20-point quarter in Washington, only to see Kirk Cousins lead the burgundy-and-gold to four second-half scoring drives. The Vikings dropped their fourth straight after starting the season 5-0, and Washington improved to 5-3-1.

By out-Chargers-ing the San Diego Chargers, the Dolphins improved to 5-4… which will be significant. Keep reading.

After a very slow start, Colin Kaepernick flashed some of that old Kaep magic against the Arizona Cardinals, who just can’t buy offense right now. The Cardinals ended up battling their way to a 23-20 win against the league’s worst scoring defense, but c’mon. This isn’t good enough from a team with Super Bowl aspirations.

The centerpiece of the afternoon, though, was Dallas at Pittsburgh. The Steelers needed to be up for this game, and they were: Ben Roethlisberger completed 80 percent of his passes for 408 yards, three touchdowns and no picks, and Le’Veon Bell had 26 touches for 134 yards from scrimmage and two scores. They even got some fake-spike mojo:

But Dak Prescott was never rattled, and Zeke Elliott continued to be the perfect back to capitalize on the NFL’s best run-blocking offensive line. Not only did Prescott find an emotional Dez Bryant (who had just found out his estranged father had died) for a massive score, he kept getting the ball to Elliott for massive touchdowns. In the end, it was Elliott following some incredible blocking that won the game for Dallas, 35-30.

At the end of the day, Sunday Night Football was more than worth waiting for.

The Pats-Seahawks instant classic had too many twists and turns to squeeze into this space: Seven lead changes, classic performances from Russell Wilson and Tom Brady, two-touchdown days from LeGarrette Blount and Doug Baldwin, and a mirror-image redux of the decisive goal-line endgame from Super Bowl XLIX:

4th and Goal.
Brady to Gronk…?

In the end, it looked like these two teams might meet in the Super Bowl again in a few months. The Seahawks improved to 6-2-1 and look set for a playoff bye. Meanwhile, the Pats dropped to 7-2, but are still on track for the same.

… unless, of course, the 5-4 Miami Dolphins run the table. They’re just two games behind the Patriots, and have to play the Patriots twice. If they win out, and the Pats win every other game, the teams will be tied at 12-4 and the Dolphins will own the tiebreaker.

Yes, the Dolphins, who started 1-4. And are on a four-game win streak.

This is why we love the NFL.