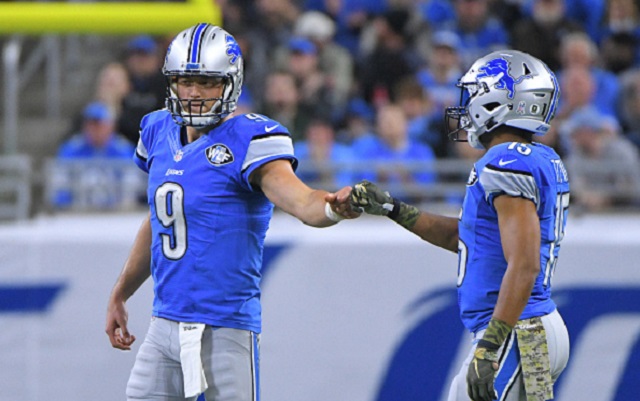 Week 11 was a wild one in the NFL. Mice roared, and lions whimpered — well, Lions whimpered for three quarters, at least. But in the end, the league’s mightiest teams prevailed, and the playoff picture got much clearer.

It started on Thursday night, of course, when the Carolina Panthers kept their season alive by holding off the New Orleans Saints. By dragging the Saints down to their level (both teams are now 4-6), both are just one game behind the Tampa Bay Buccaneers and two behind the NFC South-leading Atlanta Falcons.

One jump cut.
And GONE.

The AFC North continued to uphold its reputation for brutal football, in both senses of the word: The Buffalo Bills beat the Cincinnati Bengals in a 16-12 slugfest that may, per ESPN’s Adam Schefter, have ended superstar Bengals wideout A.J. Green’s season.

The Pittsburgh Steelers and Cleveland Browns played a forgettable 24-9 final score. Browns tight end Gary Barnidge’s late Dad-running touchdown made it look as not-very respectable as it was:

This is so awesome. pic.twitter.com/AHoF1IfA9D

To complete the awful quadfecta, the Baltimore Ravens drew first blood against the Dallas Cowboys — who then pummeled them 27-10 the rest of the way.

In a battle of jungle cats, the Jacksonville Jaguars went up north to take on the Detroit Lions. For much of the game, the Jaguars’ talented young defense put the brakes on Matthew Stafford’s MVP campaign. But though he needed both a punt-return touchdown and a pick-six to put him in position to do it, Stafford won his sixth game with his sixth fourth-quarter comeback and sixth game-winning drive. The record in one season is seven, held by Peyton Manning (2000), and Stafford has six games left to play.

The streaking Tennessee Titans flew into Indianapolis, sprinted into Lucas Oil Stadium and ran straight into Andrew Luck’s fist. The Colts rang up three offensive touchdowns before the Titans got on the board. The 5-6 Titans’ bid to catch the 6-3 Houston Texans is on hold for at least two weeks, and the Colts have managed to wedge themselves between the two teams at 5-5.

The NFL was far from done giving us upsets. The Tampa Bay Buccaneers put a 19-17 loss in the way of the Kansas City Chiefs’ path to the AFC West lead. Even Justin Houston’s return wasn’t enough to contain Jameis Winston, whose 331-yard passing day set up four Roberto Aguayo field goals (!).

In what felt like a must-win game for two presumed NFC title contenders, the slumping Arizona Cardinals went on the road to face the slumping Minnesota Vikings. Vikings quarterback Sam Bradford looked sharper than he had in months against what’s supposed to be a great pass defense, going 20-of-28 for 169 yards and a score. Meanwhile, Carson Palmer had a miserable day: 20-of-38 for 198 yards, two scores and two picks — and even that stat line was padded in garbage time. Palmer looks done.

The Giants never make it look pretty or easy, and their 22-16 win over the Chicago Bears was no exception. But at 7-3, they control the No. 1 NFC Wild Card, and face the winless Browns next week.

Speaking of making it difficult for themselves, Ryan Tannehill and the Miami Dolphins needed every minute of all four quarters to beat ineffective rookie Jared Goff and the nihilist Los Angeles Rams. Over their last four games, the Rams are losing by an average score of 9.75 to 12.5. Might we soon see the NFL’s first scoreless tie since World War II forced teams to combine rosters and cancel seasons?

Baldwin to Wilson?
BALDWIN TO WILSON!@DangeRussWilson hauls in the TD catch!

In Seattle, the Seahawks again proved that CenturyLink Field is a fortress not easily breached, stomping out the Philadelphia Eagles 26-15. Before this bitter loss, the Eagles were outscoring opponents by over seven points a game. After, they’re just a .500 team stuck in last place in the NFC East.

The New England Patriots won 30-17, which isn’t surprising. That the win came against the San Francisco 49ers’ league-worst scoring defense, and was 13-10 going into the fourth quarter… that’s eyebrow-raising indeed. Without tight end Rob Gronkowski, the Pats couldn’t put any distance between much-maligned Colin Kaepernick and the disastrous 49ers. A win’s a win, but yikes.

In the week’s glorious denouement, Kirk Cousins decisively outplayed Aaron Rodgers as Vince Lombardi’s second team beat Vince Lombardi’s first team, 42-24. Nothing is working right now for the 4-6 Packers, and everything’s clicking for Washington — who at 6-3-1 are just a half-game behind the Giants (and playing much better than the Giants).

Thanksgiving brings us some great divisional matchups (Vikings at Lions! Washington at Dallas!) that could decide the playoff fates of all the teams involved. I dare you to find a side dish that better pairs with turkey.