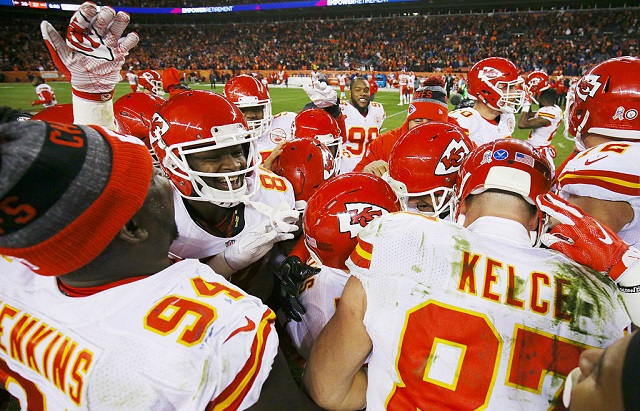 It’s the Monday Morning after a phenomenal Week 12 buffet of NFL pigskin, and we here at The Comeback aren’t the only football fans punching extra holes in our belts.

Judging by the ratings, nobody who cared to know missed the outcomes of the great slate of Thanksgiving football. The Detroit Lions did their Cardiac Cats routine on the Minnesota Vikings, securing an effective two-game lead on the NFC North with five left to play. The Dallas Cowboys took every punch the Washington offense could land and delivered a few more of their own, tightening their grip on the NFC East (and No. 1 seed in the NFC).

Oh, and the Pittsburgh Steelers walked over a metaphorically and literally Luck-less Indianapolis Colts.

Even a Sunday spread that was two games light still delivered a cornucopia of football scrumptiousness. The Atlanta Falcons’ matchup against the Arizona Cardinals figured to be a close one, as the Falcons lost their best defensive playmaker (Desmond Trufant) to injury, while the Cardinals got theirs (Tyrann Matheiu) back.

The Falcons maintained their one-game lead on the entire NFC South, while the Cardinals dropped to an all-but-unsalvageable 4-6-1.

Speaking of windows closing, how about the Cincinnati Bengals? Without A.J. Green, the Bengals had no hope of scoring on the stout Baltimore Ravens defense. Even a poor outing from Joe Flacco put more points on the board than Andy Dalton’s three strip-sacks and three turnovers (not to mention just 50 yards rushing from 17 carries by Bengals tailbacks). A brutal 19-14 divisional loss effectively ends the 3-7-1 Bengals’ season — and maybe Marvin Lewis’ coaching tenure.

The Jacksonville Jaguars racked up another coulda-woulda-shoulda noble loss, this time to the Buffalo Bills. A 28-21 defeat covers up some great individual efforts from the Jags, but a 2-9 actual record should cover up any possibility Gus Bradley is still coaching the team in 2017.

Speaking of coulda-woulda-shoulda noble losses: The Cleveland Browns were trailing the New York Giants by just a touchdown with 12 minutes to go, when quarterback Josh McCown stood in his own end zone and delivered a 54-yard bomb to Terrelle Pryor. Was this it? Would the winless Browns finally get off the schneid by felling the mighty Giants? LOL no:

The Tennessee Titans kept plugging along in the three-legged race that is the AFC South. They held off a furious last-minute comeback from the Matt Barkley-led Chicago Bears (no, really) to improve to 6-6. They drew within a half-game of the division-leading Houston Texans when Brock Osweiler’s three-interception choke job against Joey Bosa and the San Diego Chargers dropped Houston to 6-5.

Russell Wilson’s return to league-shredding dominance was short-lived. The Tampa Bay Buccaneers, who have now won five of their last seven games, completely squelched the Seahawks offense in a way nobody had done since Week 2, when the Los Angeles Rams won a 9-3 slugfest that seems like ages ago. But it was this year — and just like the Rams’ win, the Bucs’ 14-5 victory raises some serious red flags about the Seahawks’ offensive quality and depth.

Rams optimists pointed to this week’s fixture at New Orleans as an opportunity for No. 1 overall pick Jared Goff to put up some stats and build some confidence against a beleaguered Saints secondary. They were right, kind of: Goff threw three first-half touchdown passes. However, 21 points is less than half of what you need to beat Drew Brees in the Superdome. The Saints won 49-21.

Ahh, but the not-quite-good enough quarterback performances in not-quite-upsets had only just begun.

In New York, Ryan Fitzpatrick and the Jets needed only one of about six dropped/slightly out-of-bounds/slightly overthrown touchdown passes to upset the mighty (???) New England Patriots. The Pats escaped MetLife Stadium with a win, but there’s only so many times the Pats will get game-saving plays from back-benchers like Chris Hogan and Malcolm Mitchell. Don’t look now, but the Pats haven’t notched an impressive win since before Halloween.

Speaking of the last bad team the Pats barely scraped by, Colin Kaepernick and the San Francisco 49ers put together a throwback performance against the Miami Dolphins. Though it ended with Ndamukong Suh hunting Kaep down just shy of the end zone, the once and future 49ers king turned in an entire half of 2012-style dual-threat dominance. Meanwhile, if the season ended today, the 7-4 Dolphins would be IN the playoff field, and the Super Bowl champion Broncos would be OUT.

No, we’ll save the best for last.

I can hardly do justice to the instant classic that was Panthers-Raiders. Cam Newton made some incredible plays, including this picture-perfect 88-yard bomb to Ted Ginn:

But Cam also made a couple of mistakes, and Derek Carr put up a nearly identical stat line. There were enough twists and turns to fill a novel, but in the end, Khalil Mack and the Raiders defense made one more play than the Panthers could manage. The Raiders improve to 9-2, maintaining their playoff bye position, while the Panthers stay one game behind the Saints, two behind the Bucs and three behind the Falcons.

Okay, NOW we can speak of the Broncos.

Trevor Siemian played the game of his life. Von Miller was all but unblockable. Though the Kansas City Chiefs took a quick lead with a safety and a kickoff return TD, the Broncos never let up. But Justin Houston and the Chiefs never let up either, and they matched the Broncos sack for sack, kick for kick and touchdown for touchdown.

The inevitable Alex Smith mistake never happened. Andy Reid never mismanaged the clock. The Broncos kept shutting the door, and the Chiefs kept kicking it back down:

When we got free football, it was a gift. When the teams traded field goals, it felt like we were headed for our third tie of the season. But with the last few seconds of the game ticking off the clock, Chiefs kicker Cairo Santos Tecmo Super Bowl’d a game-winner off the left upright:

… and we all couldn’t be more thankful for NFL football.