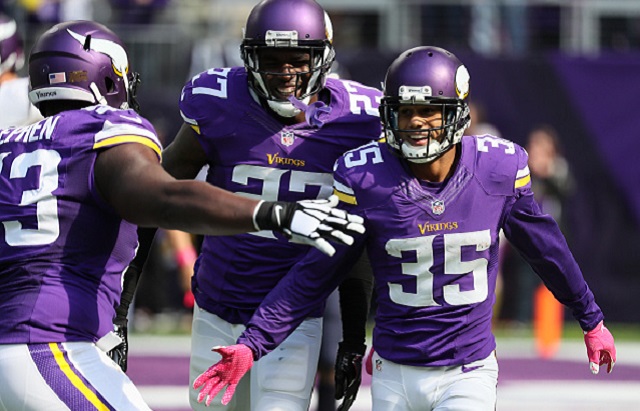 When historians flip through the musty, leather-bound tome chronicling the NFL, they’ll furrow their graying brows, squint their eyes to see through their dusty glasses and realize Week 5 of 2016 is when a team without its top quarterback, running back and wide receiver became the best team in the league.

But before the Minnesota Vikings blasted the Houston Texans into next week, there was Thursday Night Football, when the Arizona Cardinals took care of business against the San Francisco 49ers — played with both teams’ best quarterbacks on the sideline. The Cardinals are going to need a healthy Carson Palmer back to re-assert their claim on being a contender, and the 49ers are going to need to put Colin Kaepernick in before Blaine Gabbert’s awful play incites a mutiny.

In Indianapolis, the World’s Worst Super Bowl rematch ended much the way Super Bowl XLI did: With the Colts scoring 29 points, and the Bears shooting themselves in the foot. In Baltimore, Kirk Cousins and Washington’s underperforming squad did just enough against their Beltway rivals to sneak out a 16-10 win.

Legendary defensive coordinator Dick LeBeau proved he’s still got it. His Titans went down to Florida and held the Miami Dolphins to 17 points—making them officially a top ten scoring defense. LeBeau’s longtime team, the Steelers, did what they’ve done to almost everyone to the New York Jets: scoring 30-plus points on big splash plays and holding the other team to a single touchdown.

Speaking of living up to expectations, Tom Brady and the New England Patriots had the script down cold for their Cleveland Browns matchup: Brady threw for three touchdowns and over 400 yards, their two-tight-end attack terrorized the Browns defense and Cleveland was forced to run out three different quarterbacks before the 33-13 final score went in the books. But it was, of course, just the Browns, and all the emphatic win did was make us forget about the Pats’ total no-show against the Bills the week before.

The Philadelphia Eagles, another team with a claim at being the best in the league, found out that getting a bye week after a huge win is not great preparation for a road game against a team with their backs against the wall. The Detroit Lions made it a roller coaster, as they are wont to do, and for the third time in five games ended up with the ball, a little time and needing one score to win. For the second time in three, they got the points they needed — sending the Eagles back home with the first blemish on their record.

We go for it on 4th and 1 and Devonta Freeman scores on a strong 1-yard run.#ATLvsDEN #RiseUp https://t.co/ckGVewTbK9

The only other undefeated team in the league, the Denver Broncos, hosted the red-hot Atlanta Falcons—and like a host of other teams, had to do it without their starting quarterback. Rookie Paxton Lynch got his first career start and, well, looked like a talented rookie. Vic Beasley and the Falcons defense rampaged after their offense took an immediate 10-0 lead; though Lynch and the Broncos battled through six sacks and a couple of turnovers to make it a one-score game, the Falcons came out with a signature win.

Of course, the Falcons have also lost to the Tampa Bay Buccaneers, who still count that as their only win heading into Monday night.

The Dallas Cowboys established themselves as serious contenders; rookies Dak Prescott and Ezekiel Elliott stunned the Cincinnati Bengals by building a 28-0 lead. It settled into a 28-14 final score, but the Cowboys beat the Bengals at their own game: dominating the trenches on both sides of the ball.

It looks sunny, but it's really SHADY!

The @BuffaloBills RB has 154 yards on the ground today. #BUFvsLA https://t.co/rJx015KLnh

In the night cap, those smart enough to not watch the ugly back-and-forth between alleged Presidential candidates were punished with an ugly back-and-forth between alleged NFC contenders. Aaron Rodgers and the Green Bay Packers started hot, finished strong (enough), and filled the middle with two picks and a bunch of drops. The Giants, as they’ve been doing all season, struggled to score touchdowns until the fourth quarter — when Odell Beckham finally broke his TD drought.

Beautiful throw by Rodgers to Adams for the TOUCHDOWN! #GoPackGo pic.twitter.com/Cxmgn5c2iJ

But even after gutting out a primetime win, at 3-1 the Packers are effectively three games behind the 5-0 Vikings.

Sam Bradford went 22-of-30 for 271 yards and two touchdowns without Peterson or top wideout Stefon Diggs. The Vikings defense held the Texans—a likely division champion—to just one third-down conversion in 13 tries, and no touchdowns until the last five minutes of the game.

Though there are several worthy contenders for the crown, the Vikings right now have played the most complete season of anyone in the league, and are only getting stronger.