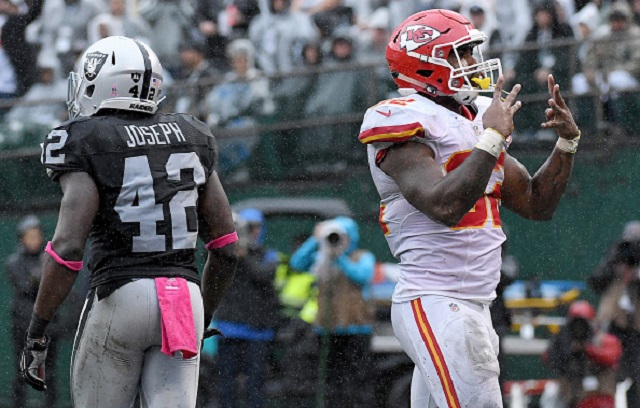 If you didn’t catch every thrilling minute of NFL action this Sunday, CONGRATULATIONS! The bleary-eyed football junkies and degenerate gamblers who couldn’t peel themselves away from nearly five quarters of Sunday Night Trainwreck are hating life this morning — while you, intrepid Monday Morning Quick Slants reader, will know everything anybody really needs to know without having to chug a pot of coffee this morning.

Of course, we’re four days removed from the Chargers’ upset of the Denver Broncos. The AFC West shake-up continued on Sunday as the Kansas City Chiefs rolled the Oakland Raiders in Oakland. Jamaal Charles got a little work in, but Spencer Ware was the workhorse and the defense provided the big plays. The Raiders and Broncos now share the division lead at 4-2, but the Chiefs and Chargers are just one and two games behind, respectively.

Back on the East Coast, there was much ado about not much: Colin Kaepernick arrived in Buffalo as the San Francisco 49ers starting quarterback, inciting political acts of great awesomeness and awfulness.

Once the game started, though, the handful of big plays Kaepernick was able to make barely dented the Bills’ great defense — and couldn’t begin to keep up with their unstoppable running game. Kaep left Buffalo the architect of a 45-16 loss.

In Chicago, Blake Bortles led a late comeback to turn a 13-0 Bears lead into a 17-16 Jaguars win. In Detroit, Matthew Stafford and Case Keenum took turns shredding each others’ useless secondaries until the final drive, when Lions safety Rafael Bush made a pick that sealed a 31-28 Lions win.

The NFL Network was at least a little more objective with their Dolphins vs Steeler highlights. pic.twitter.com/NHSGi1cXiN

Perhaps the biggest surprise of the day came in Miami, where the Pittsburgh Steelers juggernaut was, um, not. Quarterback Ryan Tannehill finally had decent protection, and the Dolphins offense finally got going. Quarterback Ben Roethlisberger was knocked around, briefly knocked out of the game and ultimately knocked out for an indeterminate chunk of the season. The 30-15 Dolphins win spells a huge change in the season narrative for both squads.

The same goes in New Orleans, where the hometown Saints hosted the Carolina Panthers and played to the exact same final score as they did in this same fixture last year, 41-38. This time around, though, the Saints won, saving their season (and possibly ending it for the 1-5 Panthers).

Tom Brady’s Gillette Stadium homecoming went about like you’d expect (after a bit of a sluggish start): Brady Bradied, Gronk Gronked, and the Pats improved to 5-1 with a comfortable 35-17 win over the Cincinnati Bengals. Also, uh, Bengals? You guys are 2-4 now. Might want to get on that.

The New York Giants played the Baltimore Ravens, but the game was only one play long:

There. One great play by Odell Beckham, Giants win.

The Tennessee Titans took care of business at home against the Cleveland Browns — though Cody Kessler and the Browns made an attempt to look competitive in the fourth quarter this time, rather than the first quarter, which resulted in a flattering 28-26 final score.

Nobody should get off the Wentz Wagon, per se, but after getting outdueled by a shaky Kirk Cousins in Washington, it’s time to admit it’s more of a horse-drawn wagon than a station wagon. The No. 2 overall pick is going to be real good, just not “All-Pro in His Rookie Year” good.

Deep in @dallascowboys territory.
And Aaron Rodgers loses the

The Green Bay Packers became the first team to intercept Cowboys rookie quarterback Dak Prescott — but not before he broke Brady’s record for pass attempts before throwing his first pick, and not in service of a Packers win. The Cowboys came to Green Bay and played their game, while Aaron Rodgers and the Packers still couldn’t play theirs. Fans cheered Brett Favre during his halftime induction to the Packers’ ring of honor, but booed Rodgers and the offense at the tail end of a 30-17 defeat.

The Atlanta Falcons’ highly anticipated matchup with the Seattle Seahawks was everything we could have hoped for: The Seahawks punched the Falcons in the mouth, the Falcons rallied back with a 21-0 third quarter, the Seahawks mounted a waning-minutes comeback and then the Falcons got the ball and a little over a minute.

Then there was a stupid non-call that ended the game and that’s all anyone’s talking about [eyeroll emoji]:

Then, it was the game of the evening… all evening.

The Colts and Texans AFC Southed at each other for most of four quarters. With less than three minutes left, the Colts were leading 23-9. Most of NRG Stadium was empty, and most TV watchers had long since gone to bed. Then Brock Osweiler hit Lamar Miller for a 10-yard touchdown pass. Soon thereafter, Osweiler hit beefy tight end C.J. Fiedorowicz for an improbable 26-yard touchdown strike. Then kicker Nick Novak hit the extra point, and we got entirely unwanted free football:

Then the Texans got a stop in overtime, and Osweiler drove to set Novak up for a game-winning field goal. Then Novak drained it.

This was a statement game for Osweiler and the Texans, and that statement literally was “I think a lot of fans tonight missed a terrific performance in the third, fourth quarter,” per the Associated Press. Maybe the Texans fans who paid to go will stick around to the bitter end next time. But you, Dear Reader? You just keep watching this space, and being the perkiest one at the mid-morning status meeting.