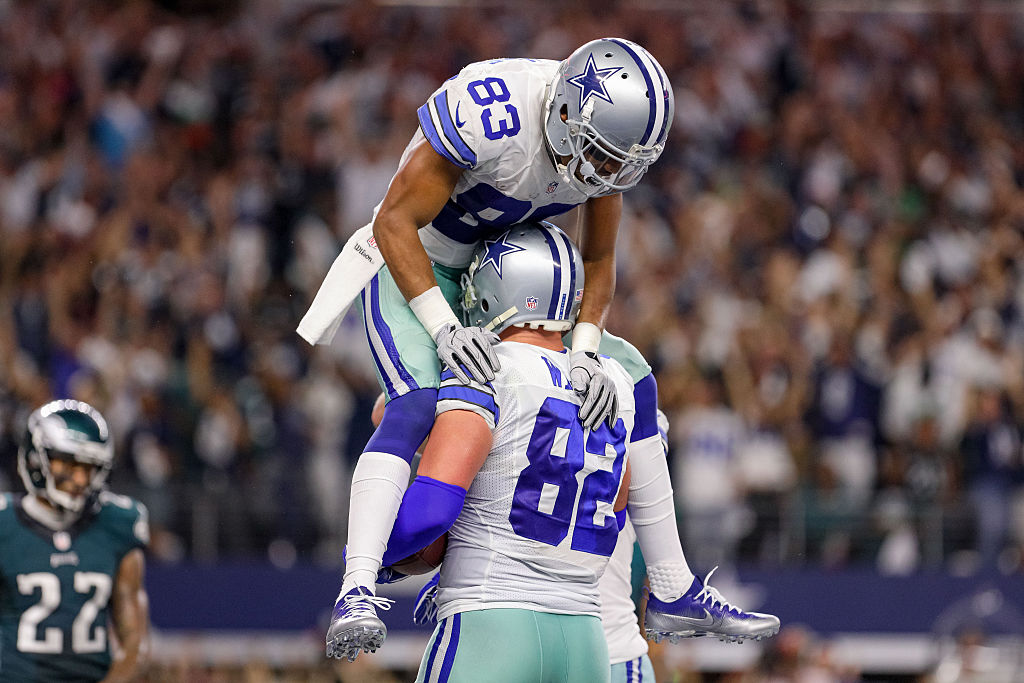 It was the best of football, it was the worst of football: Week 8 of the 2016 NFL season started with the most miserable game of the year, and ended with one of the best.

Somehow, it seems like every Thursday Night Football features the Jacksonville Jaguars and Tennessee Titans, and this one was no different. The Titans, who had been averaging less than 21 points a game, rolled up a 27-0 lead on the miserable Jaguars. Though Garbage Time King Blake Bortles made the 36-22 final score look (almost) respectable, the Jags fired offensive coordinator Greg Olson in the aftermath.

One of the most interesting matchups of the weekend actually came in the early-morning London slot. Washington and Cincinnati made for a test of two talented teams that have been wildly inconsistent this year. We hoped to come away with a clear sense of one team being better than the other. Instead — as practically everyone on Twitter pointed out — we got a fit-for-Britain 27-27 tie.

The Bills made New England Patriots work for it, at least. The game was 14-10 in the second quarter. But Rob Gronkowski scored a #nice touchdown, his 69th:

After that, the kicker for each team took turns hitting an upright on a field goal attempt — but Dan Carpenter’s bounced out and Stephen Gostkowski’s went in, and instead of going into halftime 21-13, it was 24-10. The game went about as everyone expected after that.

The Carolina Panthers, sitting at 1-5 after the bye, were facing a true must-win game against the Arizona Cardinals. Fortunately, their much-abused defense finally delivered a stifling performance. The Cardinals defense could be forgiven for faltering after last week’s war of attrition with Seattle — but they’re sitting at 3-4-1, asking questions about quarterback Carson Palmer for which there may not a happy answer.

The New York Jets needed some good old-fashioned Fitzmagic to beat the Cleveland Browns, which is almost as bad news for the Jets as the Browns. The Houston Texans were able to slow Matthew Stafford and the Lions enough for their meager offense’s 20 points to do the trick.

Kansas City Chiefs quarterback Alex Smith left the game twice after taking repeated shots to the head (don’t ask me how that’s possible in this day and age), but the rest of the Chiefs was better than the rest of the Colts for Nick Foles to outduel Andrew Luck, 30-14.

In a result few predicted, the New Orleans Saints successfully defended the Superdome against the incoming Seattle Seahawks. Like the Cardinals, the Seahawks looked beat-up and gassed after their Week 7 marathon; only some great goal-line stands prevented the Saints from winning by a lot more.

The jewel of the early block was our second overtime game of the day: Oakland at Tampa Bay, where Raiders tackle Donald Penn scored a touchdown on his old team, the Raiders set the single-game NFL record for penalties levied against them and Derek Carr set the franchise single-game record for passing yardage before sealing the deal with the legendary Two-Buc Chuck:

In Denver, revenge was appropriately extracted for the upset that the San Diego Chargers pulled against them two weeks ago — but Philip Rivers had four chances to throw a two-yard game-tying touchdown with less than three minutes to go, causing Chargers Twitter to demand immediate firing of head coach Mike McCoy. Believe it or not, the math is on McCoy’s side.

The other great late matchup, the Green Bay Packers against the Atlanta Falcons, was every bit the back-and-forth for which we’d all hoped. The two teams alternated scoring drives all game long, resulting in a whopping six lead changes. Aaron Rodgers threw for four touchdowns and ran for more yardage than all other Packers combined, while Matt Ryan completed 28-of-35 for 288 yards and three scores despite star wideout Julio Jones twisting an ankle and being limited or unavailable much of the game.

In the end, the Falcons took a one-point lead with just a few too few ticks of the clock left for Rodgers to work his magic one more time.

Then, the night cap was truly special: A Sunday Night Football with a potential division-decider between two of the hottest teams in football. For much of the night, Carson Wentz and the Philadelphia Eagles played keep-away with the Dallas Cowboys, as NFL mom and national treasure Annie Apple described Dak Prescott’s problems better than anybody:

Cowboys trying to feed Dez are starving their offense. #PHIvsDAL

… but in the end, the one deep ball the Eagles never threw was the one they needed to secure an insurmountable lead, and Prescott’s one touchdown strike to Dez came right when they needed it most. The Cowboys forced overtime (our third of the day!) and on the first drive, Prescott did everything he hadn’t done all game.

The Narrative reversed itself in real time, the lessons learned from the first three quarters were rapidly un-learned and the 6-1 Cowboys now have an effective three-game lead on the 4-3 Philadelphia Eagles.

This Sunday night was more than worth waiting all day for.