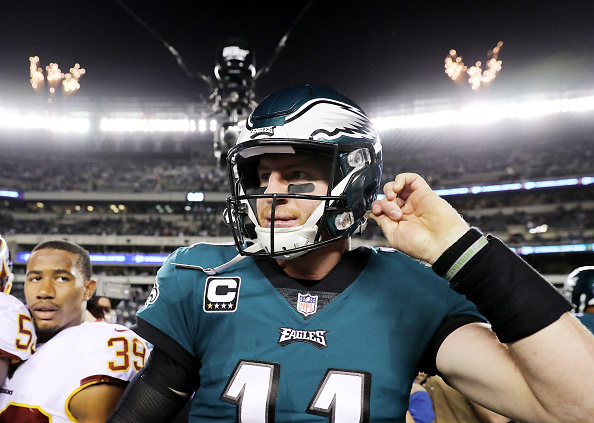 Is it still too early to gauge the NFL MVP race? We’ve been on this since Week 1, and the regular season is now 41 percent complete, so it’s beginning to feel as though the race is actually shaping up.

Here are the top eight candidates that have emerged as we approach the eighth Sunday of the 2017 season, along with a note that Cleveland Browns fans might want to skip the guys listed first and fifth. Or just stop watching football in general.

1. Philadelphia Eagles QB Carson Wentz (last week: 3rd): I hate yanking this away from Alex Smith because the guy has a 15-to-0 touchdown-to-interception ratio, but Wentz has done just about as much with less, has been unstoppable on third down and has basically turned into Houdini for a team that has the best record in the NFL. Can’t deny that.

2. Kansas City Chiefs QB Alex Smith (last week: 1st): Kansas City is still right there at 5-2 and Smith remains the league’s highest-rated passer (by a large margin) thanks in part to that flawless touchdown-to-interception ratio. He’s been pressured a lot and he’s gone deep often, and yet the veteran still hasn’t committed a single turnover this season.

3. New England Patriots QB Tom Brady (last week: 2nd): He’s right there, of course, and he was again superb in a Week 7 victory over the Falcons. But Brady just hasn’t made the same impact as the two guys listed above.

Brees gets the boys hyped in the rainy, Frozen Tundra! #SaintsGameday pic.twitter.com/GRuUTXZEB6

4. New Orleans Saints QB Drew Brees (last week: 4th): The 38-year-old has rallied the 4-2 Saints back from an 0-2 start with all of those wins coming against quality opponents. He’s completed 69.1 percent of his passes for a team that is a Super Bowl contender despite its garbage defense. That’s enough.

5. Houston Texans QB Deshaun Watson (last week: 5th): The rookie sensation absolutely lit up opposing defenses in four straight games prior to Houston’s Week 7 bye. Safe to say the Texans wouldn’t be right there in the AFC playoff picture and surging if not for him.

6. Oakland Raiders QB Derek Carr (last week: unranked): That unforgettable, season-saving final drive against the Chiefs in Week 7 is the primary reason the still-not-100-percent Carr is back in the MVP conversation after a slow start.

Russell Wilson doesn’t make any sense. How do you stop this pic.twitter.com/kiT4ag9kZj

7. Seattle Seahawks QB Russell Wilson (last week: unranked): He’s rather quietly starting to turn it up. Despite lacking support, Wilson has a 104.7 passer rating in his last four games, and the Seahawks have won three in a row.

8. Dallas Cowboys RB Ezekiel Elliott (last week: unranked): He’s proving just how screwed the Cowboys would be without him. After a slow start, the second-year back has been on fire. He has 305 scrimmage yards in his last five quarters of football, and he had one of the best games we’ve seen from anyone this season in a dominant road victory over the 49ers last week.