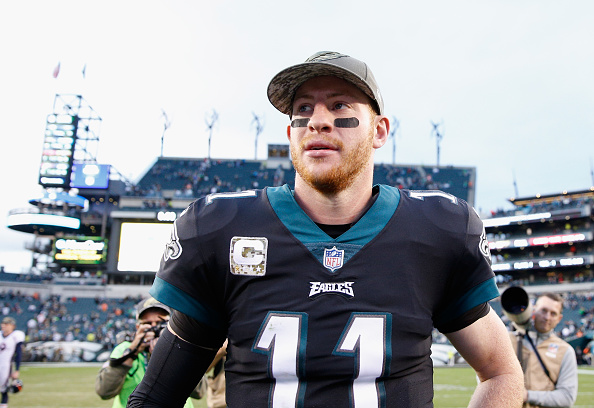 The home stretch of the 2017 NFL season, which starts every year on Thanksgiving, is just one week away. But about half a dozen players have already separated themselves from the pack in the MVP race. And they’re all quarterbacks.

Here’s how we break it down entering Week 11.

1. Philadelphia Eagles QB Carson Wentz (last week: 1st): The league’s most clutch quarterback from the first half of the season, Wentz is putting up insane numbers on third down and in the red zone. Thanks to that and Philly’s 8-1 start, holds the top spot coming out of a bye week.

2. Kansas City Chiefs QB Alex Smith (last week: 2nd): Also coming out of a bye, the midseason runner-up leads the league with an 18-to-1 touchdown-to-interception ratio for the first-place Chiefs.

3. New England Patriots QB Tom Brady (last week: 3rd): But Brady is gaining on Smith and Wentz. While they rested, he lit up one of the best defenses in the league. The Pats are in first place as well, and Brady isn’t far behind in terms of touchdown-to-interception ratio (19-to-2) and passer rating (108.3, compared to 113.9 for Smith).

4. Los Angeles Rams QB Jared Goff (last week: 5th): The league leader in yards per attempt (8.5) has completed 66 percent of his passes for 666 yards, seven touchdowns, no picks and a 143.7 passer rating in his last two games, both of which were blowouts for the 7-2 Rams.

5. New Orleans Saints QB Drew Brees (last week: 4th): Hard to take a spot away from him after yet another win, but the running game and the defense are carrying the Saints. Brees has a chance to win this thing, but he hasn’t been lighting it up solo like in years past. I think he’s cool with that, though, because New Orleans is 7-2.

6. Seattle Seahawks QB Russell Wilson (last week: 6th): He’s generally been on a tear since Week 3, and if the Seahawks find a way to win the NFC West with the Legion of Boom in disarray he’ll have a shot here. Wilson usually gets better as the season wears on.

7. Detroit Lions QB Matthew Stafford (last week: unranked): He joins the conversation after back-to-back stellar performances in one-sided victories over bad teams, but he won’t start truly contending here until he carries the Lions over some stronger opponents.

8. Dallas Cowboys DE DeMarcus Lawrence (last week: unranked): On pace to put together a 20-sack season, he won’t have a chance to win this thing unless he breaks Michael Strahan’s single-season record of 22.5.