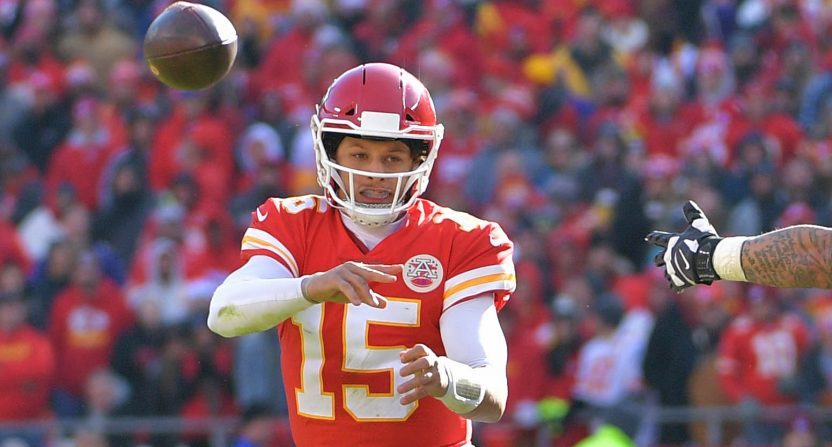 The 2018 NFL regular season is now in its final stretch, which means the MVP race is becoming intense. Entering Week 15, here’s a look at the remaining five candidates in the race for the most illustrious individual award in professional football.

1. Kansas City Chiefs QB Patrick Mahomes (last week: 3): An unforgettable performance featuring several signature plays in a comeback victory over the Ravens is enough for the second-year phenom to jump ahead of veterans Drew Brees and Philip Rivers, but it’s a damn close race. Mahomes is on pace to throw 53 touchdown passes for a first-place team, which could be enough to make him the youngest MVP in modern NFL history.

2. New Orleans Saints QB Drew Brees (last week: 1): The man has still completed an insane 75.7 percent of his passes, which would shatter the record he already owns. He’s the league’s highest-rated passer and his team is a top seed, but Mahomes has made just a few more big-time plays.

3. Los Angeles Chargers QB Philip Rivers (last week: 2): The league’s third-highest-rated passer behind Brees and Mahomes has a much higher yards-per-attempt average than Brees and a much better touchdown-to-interception ratio than Mahomes. A big performance Thursday night in Kansas City would give him a shot.

4. Los Angeles Rams DT Aaron Donald (last week: 5): A quiet outing in a loss to the Bears probably takes Donald out of it. That is unless he can muster 6.5 sacks in the final three weeks in order to set a new single-season record.

5. Seattle Seahawks QB Russell Wilson (last week: 4): Not a pretty performance in that Monday night victory over the Minnesota Vikings, but at least it was a win. Wilson would need three heroic showings to close out the season and would also need help, but his sheer numbers for a team that doesn’t offer THAT much support keep him alive here.