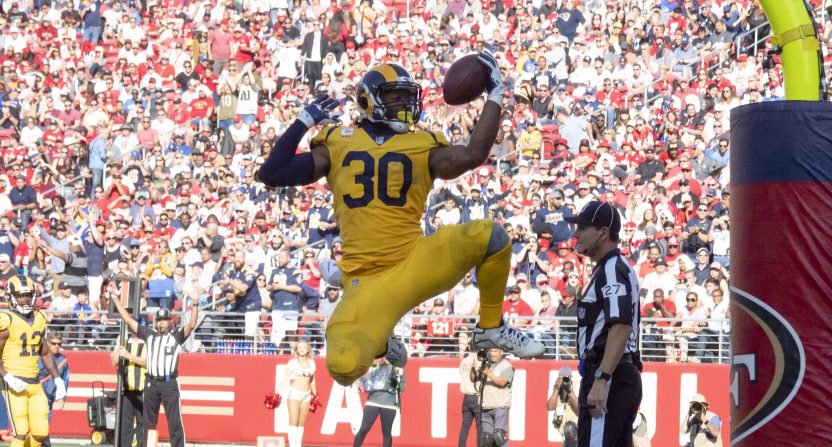 MVP talk after just six or seven games? It’s never too early to start gauging the NFL MVP race, so we’re doing exactly that despite the fact the 2018 regular season is only 42 percent complete.

Here are the top eight candidates who have emerged through seven weeks.

1. New Orleans Saints QB Drew Brees (last week: 1): The league’s highest-rated passer has yet to throw an interception for the 5-1 Saints.

2. Kansas City Chiefs QB Patrick Mahomes (last week: 2): The 23-year-old has now put together five huge performances in a seven-game span, and the 6-1 Chiefs have the highest-scoring offense in the NFL.

3. Los Angeles Chargers QB Philip Rivers (last week: 3): The AFC’s highest-rated passer is putting together a career year for the 5-2 Bolts. He’s got a 119.7 passer rating during the team’s current four-game winning streak.

4. Los Angeles Rams RB Todd Gurley (last week: 5): The superstar 24-year-old leads the league in rushing yards, yards from scrimmage, and touchdowns. In fact, he has a five-score lead over the next-best touchdown scorer and is on pace to register a record 32 of ’em.

5. Los Angeles Rams QB Jared Goff (last week: 4): Seems crazy to drop him a spot after he completed all but six of 24 passes while posted a 127.4 passer rating against the 49ers, but Gurley’s pace can’t be denied. Ultimately, Gurley and Goff might hurt each other’s cases.

6. Green Bay Packers QB Aaron Rodgers (last week: 6): His numbers aren’t as pretty as usual, but he’s playing on one freakin’ leg and carrying that mediocre team. Week 6 marked his second ridiculous fourth-quarter comeback of the season, and we won’t dock him points off a bye.

7. Minnesota Vikings WR Adam Thielen (last week: 7): He’s on pace to catch an NFL-record 153 passes for a league-high 1,878 yards and 11 touchdowns. Gotta include him.

8. New England Patriots QB Tom Brady (last week: 10): The reigning MVP has posted triple-digit passer ratings in three consecutive weeks, and the Pats have scored at least 38 points in each of the last four.

Honorable mentions for now: Von Miller, Aaron Donald, J.J. Watt, and Khalil Mack, all of whom basically take turns as the best defensive player in the game.