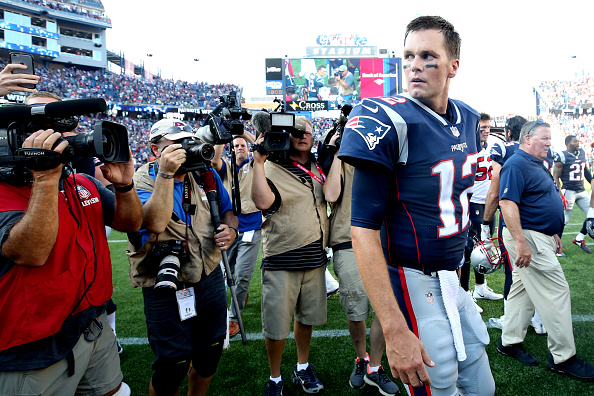 It’s never too early to start gauging the NFL MVP race, so we’re doing exactly that despite the fact the 2017 regular season is only 19 percent complete.

Some of the names listed here might look silly in the weeks to come. But here are the top 10 candidates that have emerged as we approach the fourth Sunday of the 2017 season.

1. New England Patriots QB Tom Brady (last week: 6th): Brady bombed in Week 1, but it took him just two unbelievable performances to battle back and become the MVP front-runner entering October. In his last two games, the 40-year-old has completed 74 percent of his passes for 825 yards, eight touchdowns, zero interceptions and a 146.5 passer rating. New England won both of those games despite possessing the league’s worst-ranked defense.

2. Kansas City Chiefs QB Alex Smith (last week: 1st): It’s a two-horse race early on, with Smith right there. His Chiefs are 3-0, he’s already outplayed Brady head-to-head in a road victory and he remains the league’s highest-rated passer. But he’s had a lot more support than Brady thus far, so we’re calling him the runner-up for now.

3. Oakland Raiders QB Derek Carr (last week: 2nd): Carr wasn’t good in Week 3, but we’ll give him a mulligan because it was a tough prime-time road game and even the best have tough days. Hell, Brady had one in Week 1. Carr’s overall numbers aren’t as strong, but he did carry a Super Bowl contender in the first two weeks.

Kareem Hunt continues to be a Game Genie for his fantasy owners. pic.twitter.com/CaOXlOsklC

4. Chiefs RB Kareem Hunt (last week: 8th): The rookie third-round pick leads the NFL in yards from scrimmage by a 157-yard margin and has also scored more than anybody else in football, and he’s on pace to set new NFL records in rushing yards, scrimmage yards and touchdowns. If Smith wasn’t his teammate, he’d be ranked even higher.

So, Matthew Stafford is pretty good in the redzone.
?: @OnePrideDet
pic.twitter.com/ZP7Uig5R2o

6. Detroit Lions QB Matthew Stafford (last week: 5th): A controversial call cost Stafford yet another fourth-quarter comeback last week against the Falcons. He still gets credit for the effort, though, and his 7-to-1 touchdown-to-interception ratio for a 2-1 contender is tough to deny.

8. Los Angeles Rams QB Jared Goff (last week: unranked): I’m serious. Only Smith and Brady have higher passer ratings than Goff (118.2), and the first-place Rams have the league’s highest-scoring offense. Did I really just write that?

In case you want to watch Todd Gurley’s spectacular TD again (why wouldn’t you?) #LARams pic.twitter.com/vYEOb6LRb7

9. Rams RB Todd Gurley (last week: unranked): Also serious. Gurley has bounced back after an abysmal 2016 season. He leads the NFC with 381 scrimmage yards and six touchdowns. He or Goff would be ranked higher if not for the fact they sort of cross each other out.

10. Dallas Cowboys DE Demarcus Lawrence (last week: very much unranked): Our token defensive player this week is on an epic tear. He’s on pace for 37 sacks (not realistic but still gets him on the list) and he leads the NFL in pressures.

Two players in NFL history have recorded multiple sacks in each of the first three games of a season:

Gastineau finished with a 22 sacks in '84, which was then a record.#280characters