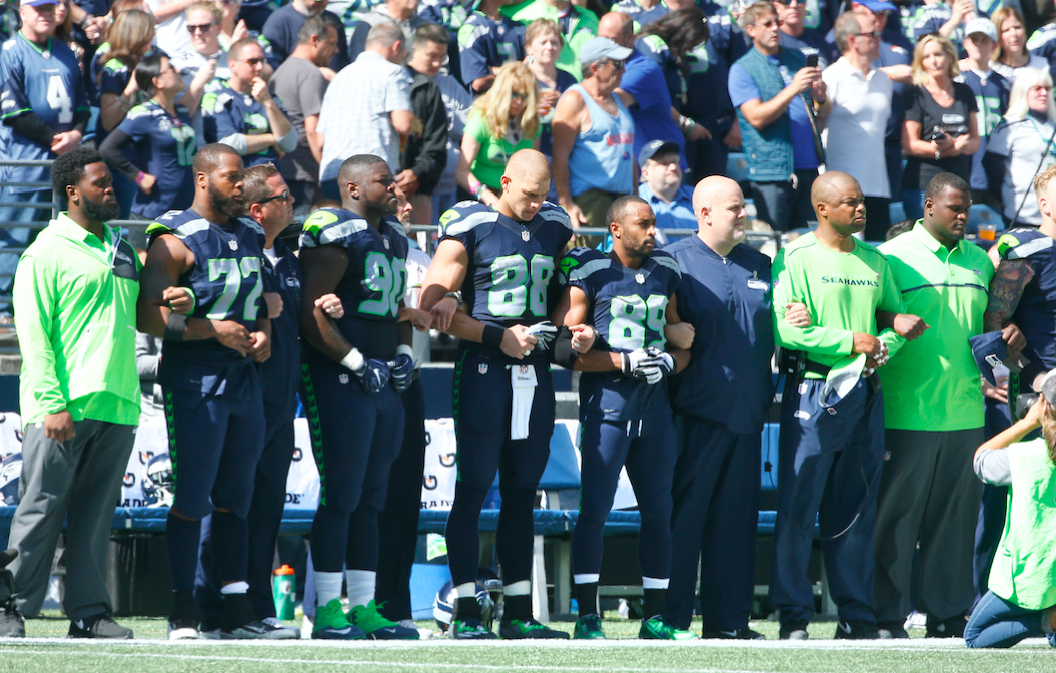 NFL national anthem protests are quickly devolving into a higher-risk version of the Ice Bucket Challenge.

It’s hard to remember now, but that viral sensation that swept across the internet during the summer of 2014 was created as a way to generate awareness and donations in the battle against ALS (a.k.a. Lou Gehrig’s Disease). The original action of turning over a bucket full of ice water didn’t seem to have anything to do with ALS, but that was the point. Sharing a video of yourself shivering as you’re suddenly doused in freezing water was eye-catching in a way that videos simply begging for money would never be. You already had your message. Now you had the perfect hook.

The Ice Bucket Challenge was a massive success but there came a tipping point (pun not intended) when you could tell participation shifted from trying to help the cause and simply became about trying to gain notoriety or viral success for yourself. Some videos didn’t even mention ALS or offer a donation link. It became about the hook, not the message.

This past weekend, a smattering of NFL players joined in on the national anthem protest that Colin Kaepernick started in the preseason. Some of the Miami Dolphins took a knee during the anthem. Kansas City Chiefs cornerback Marcus Peters raised a black-gloved fist, as did Martellus Bennett and Devin McCourty of the New England Patriots. After word leaked that the Seattle Seahawks were planning some kind of team-wide protest, they ended up standing together and interlocking arms. Kaepernick, two of his teammates, and two members of the Los Angeles Rams protested as well Monday evening.

#Seahawks originally planned to kneel together, hand over their hearts, during the anthem. But some players close with military objected

When not all #Seahawks wanted to kneel, WR Doug Baldwin decided if 46 active players aren’t together, they’re not doing it. So they’ll stand

Accordingly, members of the media and eagle-eyed Twitter followers paid more attention to the NFL sidelines during the national anthem than perhaps ever before, reporting not just who was performing some kind of protest, but even noting who wasn’t. Sunday and Monday, you didn’t have to search very hard to find rundowns of who protested, what the reaction was, and what we all think about the national anthem.

Perhaps picking up the issue where Gawker.com would have, Kara Brown wrote a piece for Jezebel on Monday citing how the Seahawks’ protest, which eventually became a much more muted version than initially intended, was big on pomp and circumstance but small on meaning or value.

The demonstration, along with the way it came about, suggests to me that none of these people really know what they’re trying to say, nor do they really understand what Colin Kaepernick is protesting. Conflating a refusal to stand for the national anthem with being anti-military is the most painfully obtuse conclusion that could possibly be drawn from these actions.

Baldwin and his team’s display reads as even less impactful when you learn they surrendered to teammates who disagreed with their plan for reasons not rooted in facts. You don’t have to concede to wrongness. You don’t have to give in to people who don’t have the courage to stand up for you and your safety in the spirit of unity.

Unfortunately (or fortunately, depending on your feelings), the detractors have actually done a masterful job taking Kaepernick’s protest and turning it to fit their sensibilities. Those who dislike Kaepernick or his agenda have inundated the mainstream with the notion that this is an affront to the United States military and to the sanctity of America itself. It’s been beaten over everyone’s head on television, talk radio, the internet and your local coffee shop. If you’re on his side, you’re against America. If you’re not on his side, you love America.

The message has been drowned out. All anyone wants to talk about is the hook.

Based on this past weekend, that seems to include most of the players in the NFL and even those who sent a message on Sunday.

It reminds me of Super Size Me. You know, Morgan Spurlock’s documentary where he eats nothing but McDonald’s for 30 days?

That’s what you remember about it, right? You remember that he undertakes this radical diet and his body starts to react negatively. Detractors came at Spurlock in two distinct ways. First was to try and debunk the claim altogether. Second, they derided the experiment as foolish and unnecessary. “Of course you’re going to gain weight and become unhealthy if you eat nothing but McDonald’s. We already knew that, dummy.”

But here’s the thing. The McDonald’s diet wasn’t the point of Super Size Me. It was the hook. The point was that Spurlock was trying to draw attention to was the rise in obesity in America, the bad eating habits that we’re promoting in schools, and the devious nature of food advertising and marketing aimed at children. If he just made a documentary about the obesity epidemic, you probably wouldn’t have paid attention, right? It doesn’t sound like something you want to pay $12 to go see at the movie theater. That’s why he needed the hook. So he ate McDonald’s for a month and used that to bookend this story about a crisis we’re living in.

Unfortunately, the focus stayed on the hook and whatever positive effects the message might have had didn’t materialize.

That’s basically what’s happening right now with Colin Kaepernick’s national anthem protest, and it seems likely to continue. With the focus so strongly on how athletes respond during the playing of the song, the message is getting lost and probably for good. The Seahawks made a big show of locking arms and then talking about unity and goodwill after the game, but none of that will actually do anything that resolves the issue Kaepernick brought to the forefront. All it does is attempt to massage the concerns of detractors focused on the means and not the message.

You know what would bring things back full circle? If NFL players or teams decided to stage some sort of protest or attention-seeking event that was different. Instead of doing something during the anthem, everyone walk to the middle of the field and sit down for 10 minutes, slightly inconveniencing the league and fans and forcing them to consider the message. Or maybe the whole team agrees to do nothing but discuss issues of police brutality in America during their postgame pressers, no matter how much they’re told to do otherwise. What if instead of a celebrating a touchdown with a dance, a player grabbed a sign that was waiting nearby with a message related to the cause? NFL players have so much power and so many ways to use it.

These are simply ideas, but the point is that they focus on the message, not the hook. The hook is tarnished and almost useless now. If you do anything during the national anthem, all anyone will want to talk about is the anthem. Whatever message you want to get across will get drowned out by people on both sides.

What this needs now is fewer people trying to do the same thing Kaepernick did and instead stepping up in their own way to advance the agenda.

In the immortal words of Don Draper, “If you don’t like what’s being said, change the conversation.” Right now, all anyone is doing is trying to influence a conversation that’s missing the point.