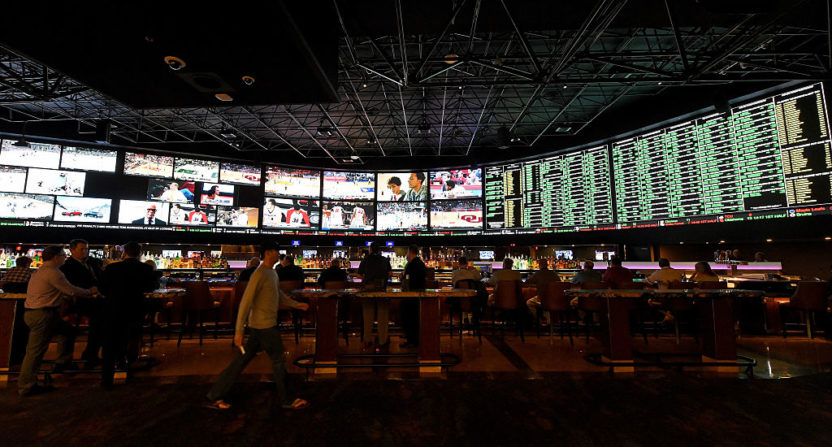 Sports betting is still illegal outside of Nevada, but players unions in the major sports leagues are already preparing for legalized sports gambling as if it’s inevitable. On Thursday, MMQB reported that the NFL, NBA, NHL and MLB unions have been holding formal meetings in New York for the past year-and-a-half to discuss how legal betting could affect their players. With New Jersey pushing for legalization and the NHL and NFL bringing teams to Las Vegas, those discussions could become even more pertinent.

“Yes, the sports unions have been discussing the issue, in particular around the integrity of our respective games,” NFLPA executive George Atallah said Thursday afternoon. “We’re collaborating on it. We might be open to changes that are coming because of (legalized sports gambling), but before we get to the revenue aspect of it, do we have the infrastructure in place to prevent any sort of shenanigans? That’s the issue.”

The MMQB has anonymous NFL owners on the record saying they don’t see sports gambling as a major concern anymore:

“From a gambling standpoint? That’s a joke to even say that’d be a problem,” one AFC owner told The MMQB in late March. “That was an issue decades ago. Now? Sports gambling is going to be legal. We might as well embrace it and become part of the solution, rather than fight it. It’s in everyone’s best interests for it to be above board.”

“The first question, naturally, is going to be about gambling,” said an NFC owner. “But any of us can pull our phones out of our pockets and place a bet right now. (The concern) is not 100 percent put to bed, but it’s relatively put to bed, just because of technology today.”

It wouldn’t be shocking if another reason is because legal sports betting could boost TV ratings and ad revenue by millions.

Last September, NHL commissioner Gary Bettman had an interesting response to the gambling question on Bloomberg’s Surveillance podcast. Although he didn’t come out in support of legalization, he suggested legal gambling wouldn’t be a much of a worry for his league:

“Gambling, for us, is probably an entirely different focus than, say, football or basketball, either at the pro or at the college level. We’re about one percent of the book. Our game doesn’t lend itself to gambling in the same way that football and basketball do,” Bettman said.

So this news from the MMQB isn’t a huge surprise, but it does show that the leagues and their players are taking this issue very seriously. The big concern is how to get ahead of the issue to ensure fans that betting won’t corrupt the game. From the MMQB:

“For us, it’s about getting the right infrastructure in place,” said Atallah. “Before we get to the revenue splits, how do you monitor behavior like they do in other parts of the world to ensure what we’re all watching isn’t fixed? That’s the question.”