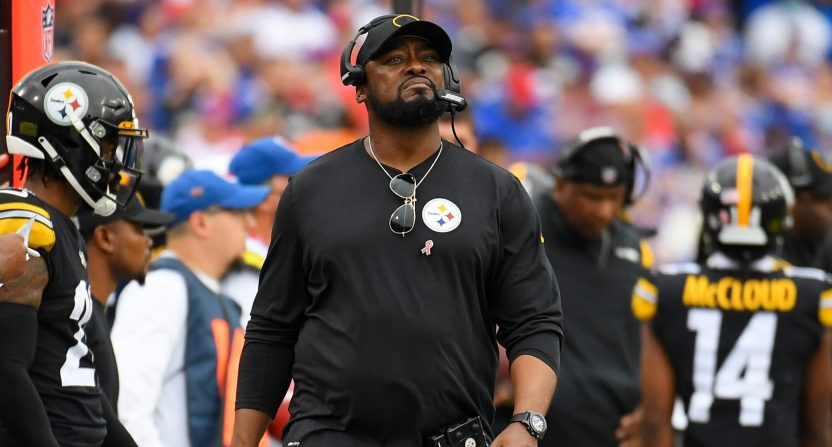 Whenever there’s a high-profile head coaching position in college football, surprising names tend to rise to the surface.

That’s already been the case with the USC head coaching position, which opened up when Clay Helton was fired early in the season. Names such as Urban Meyer, Bob Stoops, and Eric Bieniemy have been floating out there for the Trojans.

The LSU job, which is now open thanks to an agreement between outgoing coach Ed Orgeron and the school, has also created some fascinating rumors about who might be the next head coach there.

In both cases, there’s one name that’s popped up and surprised just about everyone for many reasons. That name is Pittsburgh Steelers head coach Mike Tomlin.

Tomlin has been the head coach of the Steelers since 2007, leading the team to led the team to seven division titles, three AFC championship games, two Super Bowl appearances, and a Super Bowl XLIII victory. It seems as though he wouldn’t want to leave the position, even as the Big Ben era appears to be ending. And given how the Steelers very rarely make head coaching changes, so long as he keeps things moving well, it’s probably his job to keep.

And yet, his name very oddly keeps coming up for these high-profile college jobs. Last week, former Bills GM and Steelers executive Doug Whaley said he thinks LSU would be a very attractive spot for Tomlin. Monday, Carson Palmer stopped by The Dan Patrick Show and admitted that Tomlin is considered a strong candidate for the USC job.

No one is quite sure why Tomlin has become Candidate No. 1 for all these jobs, but NFL and college football fans on social media certainly have their thoughts. Some think this all feels a bit like an attempt for Tomlin to get an extension from Pittsburgh while others marvel at the absurdity of this situation, to begin with.

Mike Tomlin? Lmao. He’s not leaving one of the best jobs in all of sports to go to USC. https://t.co/PVu6oX90YA

Mike Tomlin is on USC’s radar the same way that Megan Fox is on my radar.

Needless to say, if Mike Tomlin had any interest whatsoever in the USC job, it’s time back up the Brinks truck.

There are a lot of good reasons to think Tomlin won’t leave the Steelers for a college football job. Chief among them is the fact that the NFL season runs through mid-January, not including the playoffs, which means that either of these schools would be holding out until late January to hire their next coach, which seems unreasonable to imagine. And as many have pointed out, why would Tomlin give up the security he has in the NFL to take on the stress and pressure of trying to turn USC or LSU around?

Tomlin will surely be asked about all this soon and it will be interesting to see what he says.