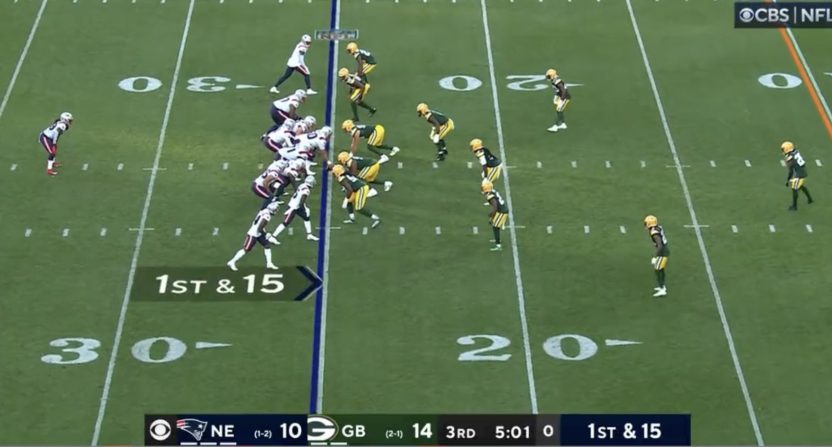 The New England Patriots got a gift thanks to the refs as a clear delay of game penalty was missed and resulted in a Patriots touchdown.

The play, which involved Patriots third string rookie QB Bailey Zappe throwing his first career touchdown, was supposed to be ruled a delay of game as the ball was snapped at least two seconds after the play clock hit zero. The referees inexplicably let play continue and DeVante Parker got the score to put the Patriots in the lead against the Green Bay Packers.

lol the Patriots blanked the end of the play clock by at least two full seconds and got a free touchdown because of it pic.twitter.com/yHRlRd7nlw

The NFL’s version of this clip is slightly different than what you see above. On their Twitter account, they posted the video, but edited out the portion that would indicate the referees screwed up. Either that was intentional or the person editing the NFL’s social media clips never did it before and they’re terrible.

This detail wasn’t lost on many who pointed out that the NFL, or at least those running their Twitter account, are hiding something and trying to keep these refs looking good.

Bold of them to show it after the delay of game that didn't get called https://t.co/fZ5bRtG6P1

Convenient you didn’t show the play clock at -3 seconds https://t.co/MlGLLou5BD

Nice job cutting the delay of game out of the clip lmao https://t.co/rdOntr4VtI

Why don't you show the snap https://t.co/eiL9CgvFJV

They really cut out the blatant missed delay of game 😭😭😭😭shameless https://t.co/i6SG0Mncme

They start the video after it’s snapped😂 https://t.co/GCHngKhCK4

Show the snap though https://t.co/RSAPupkepy

Show the 15 seconds before lol https://t.co/SBFqjm4EWO

I see you guys cut the play short so we wouldn’t see the clear delay of game💀 https://t.co/VtpLjUqRc4

LOL! They start the clip after the snap!