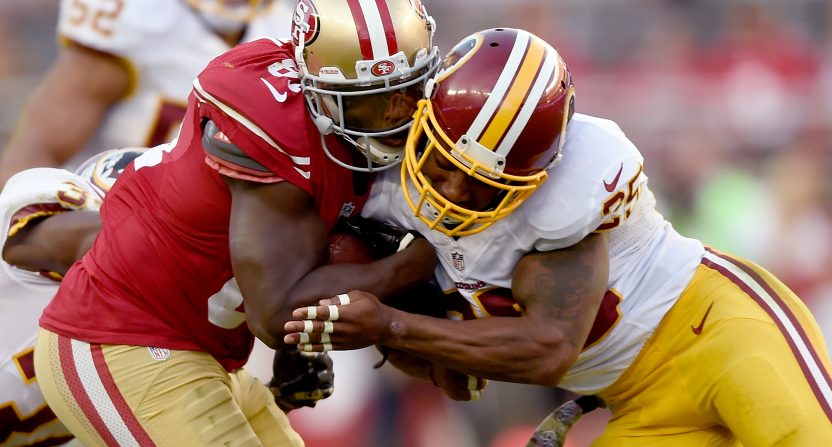 In spite of all the concerns about concussions and CTE, you might be surprised to know that the NFL has been allowing its players to police themselves when it comes to which helmet they choose to wear in games. Then again, the league has never been very good when it comes to caring about brain injuries, so perhaps it’s not that surprising after all.

However, the league and the NFL Players Association have finally joined forces to start enforcing basic requirements when it comes to the brand and type of helmet that players can wear when they step on an NFL field. The two entities made a joint announcement on Monday that they have decided to ban ten helmet models currently used by players. As part of their new rules, the league and players association introduced a poster that ranks helmets from worst to best based on how they performed in annual laboratory safety testing. The posters will be mandatory in every NFL facility and will be shared with all players, equipment managers, and team medical personnel.

“In previous seasons, NFL players could choose any helmet as long as the helmet passed current National Operating Committee on Standards for Athletic Equipment (NOCSAE) certification standards,” the release read. “The prohibited helmets perform poorly in laboratory testing, have been discontinued by the manufacturer, or were produced by companies no longer manufacturing football helmets.”

Here’s the new NFL helmet poster. If yours is in red, time for a new one. pic.twitter.com/ipRT7QSHuV

According to the announcement, NFL players must immediately stop using any helmet made by Rawlings (the company stopped making football helmets more than two years ago) as well as the Varsity and 2.0 models made by SG Helmets, the Vengeance Z10 204100, Air XP Pro and Air XP by Schutt, and the Riddell VSR-4.

The list also includes a section of helmets that may be worn by players who were already using them last season but cannot be used by new players moving forward. That includes the Riddell Speedflex and Revolution models and five Schutt models (Vengeance Z10 204101, Vengeance VTD II, Air XP Pro Q10, Vengeance Pro 204300, and Vengeance Pro 204301. All-Pro quarterbacks Tom Brady and Drew Brees are among the holdouts wearing helmets on this list.

Patriots QB Tom Brady and Saints QB Drew Brees are among the last guys still wearing the old-school style of helmet. We'll see if they have to switch. https://t.co/Wt7dp6Alu8

As far as which helmets passed the tests, the top-performing helmet was the Vicis Zero 1. There is a 2017 version and a 2018 version, which players have not yet had the chance to wear. According to the company, the outer shell of the helmet acts like a car bumper to protect the head. Quarterback Alex Smith is such a big fan of the helmet that he became an investor in Vicis. The remaining helmets that were approved, of which there are 17, includes a mixture of Riddell, Schutt, and Xenith equipment.

It’s worth noting that none of the helmets tested eliminated the possibility of concussions and traumatic brain injury, but then again it seems unlikely that such a thing will ever happen given the nature of football. Still, it’s a step in the right direction that the NFL is creating stricter guidelines to prevent injuries as much as possible.