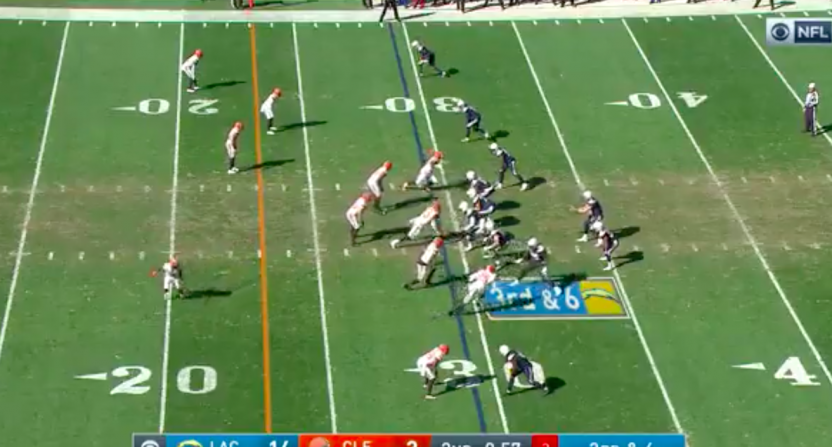 The Cleveland Browns are such a toxic franchise they even get referees fired.

Football Zebras exclusive: Down judge Hugo Cruz, who missed a clear false start in Week 6, has been fired by the NFL. This is the first midseason firing in the Super Bowl era. https://t.co/RfxSfqb6j8

In the final moments of the first half of the game, the Chargers scored on a 29-yard touchdown pass to take a 21-3 lead over the Browns into the locker room. However, before the ball was snapped, Chargers left tackle Russell Okung jumped very clearly and obviously. Still, there was no flag from Cruz, who had a direct line of sight on the play.

The NFL has fired down judge Hugo Cruz, who missed a clear false start on #Chargers OT Russell Okung in Week 6, per @footballzebras. This is the first time in the Super Bowl era that the NFL has fired an official in the middle of the regular season.pic.twitter.com/cmLpOD7BKC

So gratuitous was the no-call that that Browns defender Myles Garrett called out the ref. “Do your job just like we need to do our job,” Garrett told the Associated Press. “If it’s holding, call holding. If it’s a false start, [call] false start, whether it’s us or them.”

“It was so obvious. To my mind, he’s moved, nobody else has moved and the ball hasn’t moved, so it’s kinda textbook. The flag should be up. I don’t understand how you don’t see it. That’s his job is to look down the line and see when people are jumping offside or false-starting, but I’ve got to keep on finishing the play.”

After the game, Browns coach Hue Jackson said one official told him that they missed the call.

“Yep. Yep. Missed it,” coach Hue Jackson said, via Cleveland.com‘s Mary Kay Cabot. “Yeah, I was told they missed it. Was very honest on my side. It sure wasn’t the guy on the other side. It was definitely the guy on my side. That was [a false start].”

On Thursday, the NFL fired Cruz, making it the first time they’ve fired an official midseason since the advent of the Super Bowl. Messing up was bad enough, but the fact that the play resulted in a backbreaking touchdown against a snakebitten franchise apparently put it over the top. LA won the game 38-14, so it might not have made a difference, but then again that doesn’t matter.

The NFL didn’t comment on the firing but the NFL Referees Association was understandably upset with the move.

“The NFL has a troubling history of knee-jerk reactions with an eye on public relations, and clearly it has not learned from past mistakes,” said Scott Green, executive director of the NFL Referees Association. “The NFLRA will protect the collectively bargained rights of all officials and will challenge this reckless decision through the grievance process.”

The NFLRA has 90 days to file a grievance on Cruz’s behalf and all signs point to them doing so. The move is surely sending shockwaves through the referee union as they’re suddenly one really bad call away from potentially losing their jobs.

The NFL usually grades officials on their performance on every play of every game. And though the league has suspended or reassigned officials for game mistakes, though it always waited until the offseason to make personnel changes. Until now.

1 thought on “NFL not messing around, fires official after missed false start call in Browns-Chargers game”