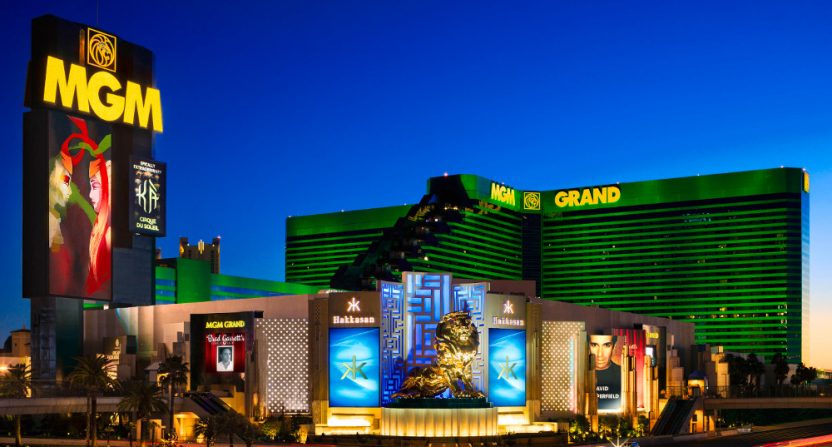 There’s a potential showdown looming between the NFL and close to three dozen players—and it’s over arm wrestling in Las Vegas. The league has previously banned players from doing anything even at a non-casino venue owned by a casino, as they did with fantasy football events Tony Romo was involved with back in 2015 and 2016, but as Jarrett Bell of USA Today writes, that large group of players is in Vegas this weekend for an arm-wrestling championship that takes place at the MGM Grand Hotel and Casino.

The inaugural “Pro Football Arm Wrestling Championship” is set to air on CBS over two weekends later this spring. It will feature everyone from James Harrison and Marshawn Lynch (as coaches) to Oakland Raiders’ punter Marquette King and San Francisco 49ers linebacker NaVarro Bowman. The league says they’re unhappy they weren’t notified about this, but the organizers dispute that, saying they talked with NFL officials. But the league still wants to potentially punish players for participation here:

According to the NFL, players participating in this specific event — without pre-approval — are in violation of the gambling policy and subject to discipline.

“Had we been asked in advance if this was acceptable, we would have indicated that it was in direct violation of the gambling policy,” Joe Lockhart, the NFL’s executive vice president for communications and public affairs, told USA TODAY Sports. “No one sought pre-approval.”

…Interestingly, [event organizer Alan] Brickman disputes the contention that pre-approval wasn’t sought from the NFL. He told USA TODAY Sports that, beginning in January, he engaged with two different departments within the league and tried to strike a deal to include the NFL as a partner with the event.

Obviously, the NFL didn’t sign up. Yet Brickman maintains that during communication with the league, guidelines were suggested that included showing no images during the broadcast of any gambling-related activities or any alcohol. He said the power was turned off on gambling machines in the vicinity of the events being taped.

That’s a significant discrepancy, and (presuming Brickman’s story is accurate) one that raises questions about the NFL’s internal communication. Still, the bigger question is what will come of this. Will the NFL try to maintain their previous draconian “no casino-linked events” stance even now that they have a team moving to Vegas? Unlike the Romo events, it seems too late for them to actually shut this down, but they could still try and fine the players involved. Or will the league realize that casino-affiliated events aren’t necessarily going to hurt it?

The basic idea behind the NFL’s stance against casino events isn’t necessarily a bad one. The league needs to ensure that its on-field product isn’t compromised by gamblers; if a story came out on NFL players or officials manipulating games’ outcomes (or even just point spreads), that could harm the league. The Tim Donaghy scandal was a big blow for the NBA. And there’s merit to the NFL being at least somewhat concerned about players’ gambling activities, unlike the PGA and their apparent lack of interest in investigating Phil Mickelson’s million-dollar bets.

However, there’s a big step between “player appears at casino” and “player tries to throw a game.” Policies to prevent players from betting on NFL games make sense, but policies to keep them away from events at casinos seem overly harsh and unnecessary. That’s especially true now that the league is putting a team in Vegas; there could be so many sponsorship opportunities for players there, and nixing all of them because of a blanket “no gambling connections” policy appears silly.

The ban on players participating in casino events also seems a bit hypocritical. For one thing, the NFL has been willing to let its teams do sponsorship deals with daily fantasy sites. While that’s not the same as standard betting, it does involve money changing hands over the outcome of sports contests. (To be fair, they have also let players appear in daily fantasy commercials, but the “We want nothing to do with gambling” stance while they’re taking money from daily fantasy feels a bit silly.)

Beyond that, the deal to move the Raiders to Vegas has a lot to do with gambling. There wouldn’t be the public money there for the stadium deal without gambling and its associated enterprises, and some have questioned how they found $750 million in public money for a NFL stadium when they couldn’t find $14 million for schools. There also wouldn’t be many people in Vegas who could afford NFL ticket prices if not for the gambling industry.

Gambling is a key part of what makes Vegas work, and it’s a big part of what makes the NFL work too. Imagine how much lower the interest in the league would be if no one was betting on it. Telling players they can’t bet on NFL games is fine, but the whole “thou shalt not touch” approach to anything with even minor connections to gambling seems overbearing and unnecessary. Hopefully the league will realize that this arm-wrestling championship in a casino isn’t really a big deal. If not, though, we could be in for another fight between the NFL and its players.