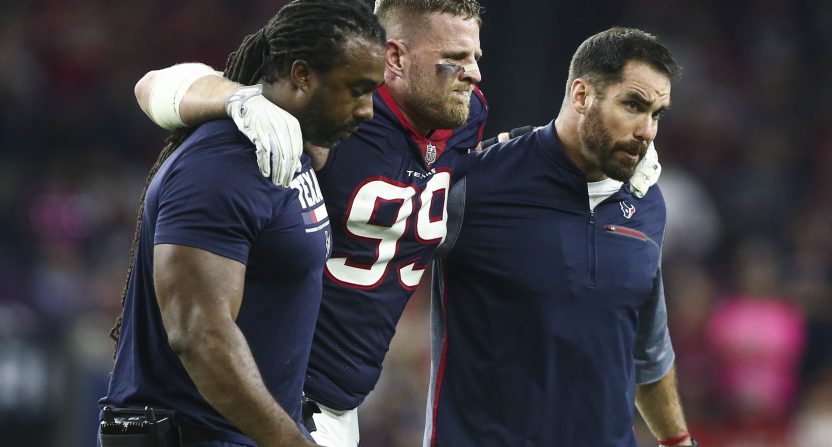 Beyond the big hits and the one-handed touchdown catches are the surprises of each and every NFL season that likely keep fans coming back for more. Last year was packed full of surprises.

A number of big-name players went down with serious injuries in 2017, causing fantasy football owners all over the country to scream loudly alone in their cars each week before entering their homes to be with their families.

Thanks to all these injuries, a bunch of unknown players were given more opportunities than anticipated last year and some of them were even able to capitalize on these increased chances. A number of unknown guys have now become household names heading into the upcoming season.

For some of these surprise performers and players coming off of injuries from last year, 2018 will be an opportunity to prove their doubters wrong. So just who exactly are the guys with the most to prove in the upcoming NFL season?

After four straight appearances in the Pro Bowl, Sherman experienced a bit of a down year in 2017 thanks mostly to him rupturing his right Achilles and missing seven games. In March, the veteran corner also underwent minor surgery on his left Achilles.

Despite his injuries, the 49ers still felt Sherman was worth giving a three-year, $27.15 million contract this offseason. He’s joining a San Francisco defense that ranked 22nd against the pass last year.

Will he be able to return to his Pro Bowl-caliber form in 2018 or will the downfall of Sherman’s career begin to take shape?

As a rookie last season, Hunt looked more like he had been in the NFL for a handful of years. He not only led all rookies in rushing last season, but he had more rushing yards in 2017 than any running back in the entire league (1,327).

The Chiefs are likely going to rely on Hunt to produce again next season as they try and ease quarterback Patrick Mahomes into the offense. Will the young running back be able to put up similar numbers in 2018 to what he did as a rookie?

Last year, Thielen became just the third Vikings player not named Randy Moss since 2001 to finish a season with at least 1,000 receiving yards.

In his fourth year with Minnesota, Thielen was given the opportunity to be a full-time starter for the first time and he took advantage of it for sure. He played in all 16 games last year, hauling in 91 passes for 1,276 yards and four touchdowns.

Thanks to his production last season, Thielen should expect an increase in attention from opposing defenses in 2018. Will he be able to maintain his production from last year or will the receiver just end up being a one-season wonder?

Despite earning his third straight trip to the Pro Bowl in 2017, Bennett was shipped out of town by the Seattle Seahawks this offseason and traded to the Eagles.

With Philadelphia, he likely won’t be seeing the field as much due to the Eagles having a boatload of pass rushers on their current defense. But the decrease in snaps could also benefit Bennett and keep him healthier throughout the season.

How well will he respond to having a role on a defense that is not as full-time as he has been used to during his NFL career?

Keenum had a magical season in 2017 as he helped the Minnesota Vikings get all the way to the NFC Championship. The quarterback easily had the best year of his pro career with the Vikings in 2017, throwing for 3,547 yards, 22 touchdowns, and just seven interceptions.

However, Keenum’s performance was still not enough to convince Minnesota to keep him around in 2018. Instead, the Vikings went out and got Kirk Cousins and Keenum landed with the Broncos.

Denver did not even draft a quarterback this year, so they are really hoping that Keenum will play in 2018 like he did for Minnesota last season. Will the Broncos’ risk pay off?

From 2012 to 2015, Watt was an absolute monster out on the field. During those four seasons, he accumulated a total of 69 sacks and he earned a First-Team All-Pro selection in each year.

However, Watt has only appeared in a whopping eight games in the last two seasons. A back injury limited him to just three appearances in 2016 and last season the defensive lineman was only able to play in five games due to a fracture in his leg.

Will Watt ever return to the form that used to give opposing offenses nightmares?