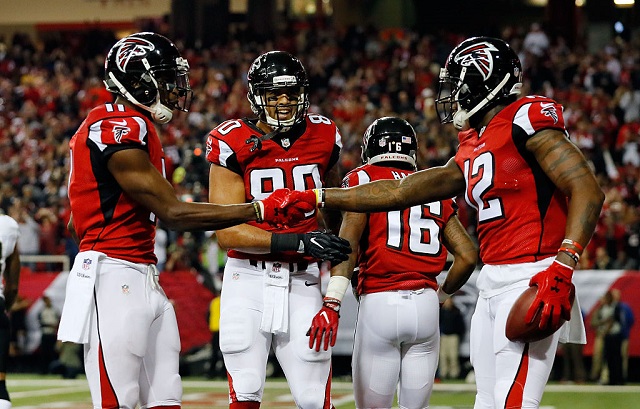 In the final regular season power rankings of 2016, we look at which team exceeded expectations most and which fell far below the bar set for them.

All NFL season long, the Comeback has been re-ranking the 32 teams after each week’s slate of games. Now that the final week of the regular season is in the books, we’re issuing our definitive worst-to-first ranking — and noting how far each squad risen or fallen since their season debut.

32. Los Angeles Rams
Original position: 32
Preseason expectations weren’t high, and the Rams’ disastrous season opener in Santa Clara affirmed their bottom-rung standing on the NFL’s power ladder. Though they had a few moments of hope along the way, losing their last seven games (and 11 of their last 12) put them right back on the bottom. Oh, and going out on a 44-6 blowout didn’t help.

31. Cleveland Browns
Original position: 31
Though a win last week gave them a temporary lift, blowing several chances to beat the Pittsburgh Steelers’ backups in Week 17 dispelled any chance of this team going out on a high note.

30. Chicago Bears
Original position: 22
The Bears proved they have some young talent, but quarterback Jay Cutler’s ultimate flame-out and a total lack of consistency on either side of the ball makes it impossible to rank them any higher.

29. Jacksonville Jaguars
Original position: 13
Oh dear. I put the Jags up pretty high based not just on post-draft hype, but on how close they played the theoretically mighty Green Bay Packers in Week 1. What I didn’t know then was the Packers were about to struggle through the first half of the season, and the Jaguars were going to sleepwalk to head coach Gus Bradley’s doom.

28. San Diego Chargers
Original position: 28
I still say Mike McCoy is a really good coach, and this team isn’t as far away as they looked in 2016. But they started the year with a season-sabotaging lockout of rookie stud Joey Bosa, and they end it an unforgivable string of five losses — including the Browns’ only W all year.

27. San Francisco 49ers
Original position: 27
Okay, I promise I didn’t manipulate the rankings to get so many of these teams back at their original slots. But “terrible” isn’t hard to spot, and these 49ers’ lack of talent was obvious back in May.

26. New York Jets
Original position: 7
Here’s the first really big miss on the list. The Jets were very nearly a playoff team last year, and in Week 1 took theoretical AFC title contender Cincinnati Bengals deep into the fourth quarter. But the Bengals were not anywhere near that good and for the Jets, it was all downhill after Week 1.

25. Indianapolis Colts
Original position: 21
We knew this team was talented but flawed. A nice little comeback win over the Jags in Week 17 gives Colts fans a warm fuzzy to hang onto after a second straight disappointing season.

24. Houston Texans
Original position: 10
J.J. Watt’s too-quick return to the field, and first-round pick Will Fuller’s impressive debut, led me (and Texans fans) down a primrose path. But after everything that went wrong — from Watt’s season-ending injury aggravation to quarterback Brock Osweiler’s benching — are somehow still in the AFC playoff field, with a chance to shock the world.

TDs don't usually come this easy.@21DM_ERA will take it anyway.

23. Buffalo Bills
Original position: 30
Their season finale was absolutely brutal, and the complete and total post-season collapse of the chain of command is an awful look. But this team had some big moments, and in Week 16 very nearly upset a double-digit win Dolphins team that had something to prove. They can’t go any higher, but I’d still take the Bills over any of the teams ranked below them — and that’s what power rankings are all about.

22. Carolina Panthers
Original position: 6
Remember when the Panthers barely lost the Super Bowl rematch that could have also been a Super Bowl preview? Except neither the Panthers nor the Broncos even made the playoffs this year? Yeah.

21. Minnesota Vikings
Original position: 25
The Vikings started at 25, and finished at 21. As long as I don’t bring up the fact that they briefly hit No. 1 in the middle there, we can all marvel at their consistency (and my accuracy).

20. Cincinnati Bengals
Original position: 3
This was the year the Bengals were finally going to get over the hump. Or, they were going to become the hump, I guess.

19. Arizona Cardinals
Original position: 5
If you cherry-picked a handful of results, you could pretend these Cardinals were just as good as everyone thought. “They just didn’t come out of the gate strong against the best-coached team in football,” I assured you back in Week 1 — but the Cardinals weren’t consistently strong at any point in the season.

18. Philadelphia Eagles
Original position: 18
It’s perfect: The team with the biggest variance between their performance and results ends up with the exact same middle-of-the-road ranking they started with. The Football Gods have a wonderful sense of humor.

17. Tennessee Titans
Original position: 29
Full credit to the Titans, who in Week 17 removed all doubt about which team is really the best in the AFC South. It was just too little, too late.

16. Oakland Raiders
Original position: 14
In Week 17, the Raiders didn’t look like they could beat a good team with Matt McGloin under center, and now they’ll have to roll with third-stringer Connor Cook. It’s hard to let the disastrous season finale weigh too heavily on what’s been a dream season, but it’s also hard to imagine the Derek Carr-less Raiders belong anywhere near the AFC title race.

15. Denver Broncos
Original position: 4
We all expected quarterback struggles/drama to affect the Super Bowl champions. But while Trevor Siemian did well with the opportunities he had, losing tailback C.J. Anderson to injury removed any semblance of balance from the offense — and left the Broncos all but totally unable to score points.

And Kirk throws a pick.

14. Washington
Original position: 19
Halfway through the season, it looked like Jay Gruden and Kirk Cousins were going to defy the odds and doubters to earn a second straight playoff bid. But a 2-4 stretch run knocked them out of the playoffs — and a little further down this list.

13. New Orleans Saints
Original position: 15
The way this team fought down the stretch — despite being all but eliminated for much of the second half of the season — wasn’t just admirable, but a blast to watch. This team is not far away from getting back to their heyday of offense and defense.

12. Baltimore Ravens
Original position: 26
Joe Flacco, like a phoenix, needs to get an offensive coordinator fired every year or two. The result is always the same: A significant boost in production and better results for the Ravens. Too bad this death/rebirth cycle fell just short of the postseason.

11. Tampa Bay Buccaneers
Original position: 9
“Jameis has made the jump,” I confidently asserted after Week 1. Though the Bucs struggled with health, experience and consistency, this team is very young and very dangerous and very nearly there.

10. Seattle Seahawks
Original position: 17
The Seahawks, who had lost three of their prior five going into the last week of the season, only beat the 49ers by two points in the season’s final contest. For as scary as this team has looked at points throughout the season, they seem extremely beatable right now.

9. Detroit Lions
Original position: 11
The Lions are also on a poor run of results, but losing what might have been their three hardest games of the season wouldn’t be as troubling if they weren’t the last three games before heading into a playoff bracket that contains all three of those teams.

8. Miami Dolphins
Original position: 24
What more can be said about the coaching job Adam Gase has done? Though the Dolphins proved in the last week of the season they aren’t as good as the New England Patriots, that isn’t much of an insult.

7. New York Giants
Original position: 12
We all saw seeds of how good the defense could be in their Week 1 upset of the Cowboys. We just had no idea how good the Cowboys would be (or how bad quarterback Eli Manning could play without torpedoing the Giants’ season).

6. Pittsburgh Steelers
Original position: 2
Pundits like me spent much of the first half of the season raving about how good the Steelers looked, even as they struggled mightily with consistency on both sides of the ball. Weirdly, racking up a bunch of close wins against good teams seems to have resulted in them flying under everyone’s second-half radar.

This just in: Tyreek Hill is good at football. #NFLROTW Tyreek Hill https://t.co/0oIQKCO0C3

5. Kansas City Chiefs
Original position: 16
The defense got stronger all year long, and the emergence of Tyreek Hill on both offense and special teams gave this team the explosive edge they’ve lacked for so long. Neither of those elements were apparent in their Week 1 back-and-forth battle against the Chargers, though.

4. Green Bay Packers
Original position: 8
The Packers’ season-ending six-game win streak feels like a worst-to-first story. But back in the fall of 2016, we expected this team to be exactly where they ended up: in the thick of the NFC North — and NFC conference — title race.

3. Atlanta Falcons
Original position: 23
After a season-opening loss to the Buccaneers, I noted Matt Ryan had made “progress,” but the Falcons looked “like the worst team in a middling division.” After a season-closing win in New Orleans, the high-flying Falcons look like the most dangerous team in the league.

2. Dallas Cowboys
Original position: 20
Wow. The one time the Cowboys didn’t ride into the season on a wave of questionably deserved Super Bowl hype might be the year they actually go out and win the thing.