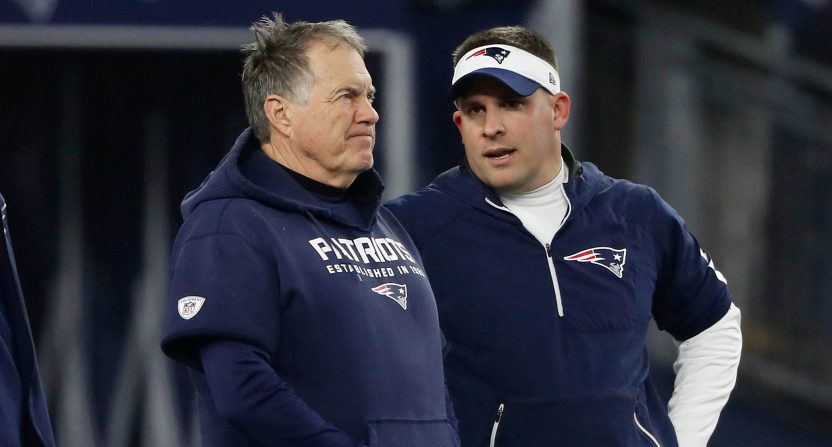 The supply-and-demand dynamics are constantly shifting at the most important position in professional football. And with patience levels also low, it’s easy to shift from comfortable to desperate and desperate to comfortable with regard to the quarterback spot.

Here’s an updated look at how desperate every NFL franchise should be to find their next franchise quarterback.

32. Kansas City Chiefs: Duh. Patrick Mahomes is off to one of the best starts to a career in NFL history.

31. Seattle Seahawks: Russell Wilson is very good at football, in his prime, and the highest-paid player in league history.

30. Green Bay Packers: They would appear a hell of a lot lower on this list if not for Aaron Rodgers’ massive contract, and the fact they used a first-round pick on Jordan Love in April.

29. Atlanta Falcons: Matt Ryan is a former MVP coming off a big season. and has several years left.

28. Houston Texans: Deshaun Watson is a star who has delivered pretty damn consistently. He’s no Mahomes, though, and he’s yet to win big.

27. Philadelphia Eagles: Carson Wentz isn’t going anyway, but he does have to prove he can stay healthy. They also get credit for the presence of Jalen Hurts.

26. Los Angeles Rams: They can’t afford to be desperate. Jared Goff’s contract says they’re married to him for at least the next three years.

25. Baltimore Ravens: Their quarterback is the youngest MVP in modern NFL history, but he has struggled in both of his playoff appearances and will have to prove 2019 wasn’t an anomaly.

24. Minnesota Vikings: Kirk Cousins has a shiny new deal. They will hold on for at least a couple more seasons.

23. New Orleans Saints: I don’t know how many years Drew Brees has left, I don’t know if Taysom Hill is the answer, and I don’t know if Jameis Winston can right the ship. I do know that having three options like that decreases your need to be desperate.

22. Cincinnati Bengals: Joe Burrow is one of the most promising quarterback prospects of this era, but the fact remains he’s yet to play a game.

21. Cleveland Browns: Baker Mayfield’s regression in 2019 was worrisome, but let’s keep in mind he shined as a rookie and Freddie Kitchens was a mess.

20. Arizona Cardinals: Kyler Murray isn’t a star yet, but the reigning offensive Rookie of the Year is locked in for several seasons.

19. Carolina Panthers: Teddy Bridgewater is the guy for the next two years, but nothing’s remotely guaranteed beyond that.

18. Dallas Cowboys: This could change quickly if the Dak Prescott negotiations crash and burn, but it appears Dak is their guy and he’s had lots of success thus far.

17. San Francisco 49ers: Jimmy Garoppolo may be coming off a Super Bowl season, but his contract is essentially year-to-year and I’m not convinced the regime is totally sold on Jimmy G.

16. Las Vegas Raiders: Doesn’t seem as though they’re smitten with Derek Carr, but the veteran has had a successful career and should be in his prime. They get some points for the fact Marcus Mariota could still have a shot.

15. Miami Dolphins: Tua Tagovailoa isn’t a sure thing, but the jury will at the very least be out for a couple of seasons. Plus, Josh Rosen remains on the roster. That counts for something.

14. Tennessee Titans: Ryan Tannehill could fall apart as quickly as he emerged, but he has earned some rope with his play and his contract.

12. New York Jets: Sam Darnold has had some tough luck, but has flashed just enough for me to give him the benefit of the doubt. His fate is pretty much a toss-up though.

11. Buffalo Bills: Josh Allen’s sophomore season was promising, but also not convincing. And that ugly playoff performance was concerning. This one really could go either way in the next year or two.

10. New York Giants: Daniel Jones has to clean up his play in a major way, but the Giants will certainly give the 2019 first-round pick plenty of time.

9. Washington Redskins: The dysfunctional Redskins are less likely to be patient with Dwayne Haskins, who more often than not looked like hell as a rookie, and was at least taken a little later in Round 1.

8. Tampa Bay Buccaneers: I know this Tom Brady thing is exciting, but the dude will be 43 when he throws his first pass in that uniform.

7. Los Angeles Chargers: I don’t trust Justin Herbert any more than I believe in Tyrod Taylor. Still, they have time.

6. Detroit Lions: They’re set with Matthew Stafford right now, but it’s becoming pretty clear that this is a make-or-break season for a quarterback who hasn’t won a playoff game in 11 seasons with the team.

5. Indianapolis Colts: Jacoby Brissett wasn’t the answer, and Philip Rivers is merely a bridge. That bridge might span multiple seasons, but the Colts have to get serious about finding the next guy right now.

4. Pittsburgh Steelers: Ben Roethlisberger has to be close to the 18th hole, and we received lots of proof last year that his successor isn’t on that roster.

3. Chicago Bears: It wouldn’t surprise me at all to see the Bears move on from both Mitchell Trubisky and Nick Foles after this season. Neither is the answer, and neither will get much time.

2. Jacksonville Jaguars: Gardner Minshew II struggled mightily in his second run as the starter in 2019. The sixth-round pick is unlikely to hold on to that starting job. This changes a fair bit, though, if they sign Cam Newton.

1. New England Patriots: You know how rarely Day 3 picks like Jarrett Stidham pan out at quarterback? Tom Brady was a massive exception, but lightning isn’t likely to strike twice.