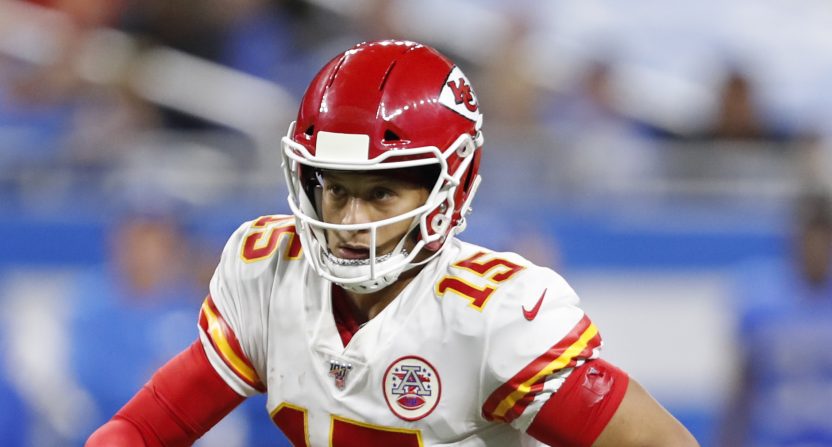 One month into the 2019 NFL season, about a quarter of the league’s Week 1 starting quarterbacks have been replaced. There have been several surprise stars, as well as several utter disappointments under center.

Here’s how we rank them all with four weeks in the books and October upon us:

2. Russell Wilson, Seattle Seahawks: Wilson isn’t far behind with his 8-to-0 touchdown-to-interception ratio and an NFC-leading 118.7 rating. He’s also rushed for a pair of touchdowns.

3. Dak Prescott, Dallas Cowboys: He ranks second to only Wilson with a completion rate of 72.4, and second to only Mahomes with a 9.0 yards-per-attempt average.

4. Lamar Jackson, Baltimore Ravens: The league’s fifth-highest-rated passer has completed nearly 65 percent of his throws and has tossed just two picks. He also leads all quarterbacks with 238 rushing yards.

5. Gardner Minshew, Jacksonville Jaguars: Pretty unbelievable that a rookie sixth-round pick is listed this high, but Minshew truly has been magic. It goes beyond the numbers, but the stats aren’t bad either. He’s the league’s sixth-highest rated passer and he’s been his best in clutch moments.

6. Kyle Allen, Carolina Panthers: Yeah, we’re rolling with a rookie late-round pick and an undrafted sophomore backup in the top 10. No choice. Allen has practically been perfect in two road victories in place of Cam Newton. The sample is small, but only Mahomes and Wilson have higher passer ratings.

7. Philip Rivers, Los Angeles Chargers: Only three qualified quarterbacks have higher yards-per-attempt averages than Rivers, who ranks in the top 10 in pretty much every key category.

8. Daniel Jones, New York Giants: He’s turned it over four times in two starts, but the rookie No. 6 overall pick has still put on a show in back-to-back impressive wins to launch his career. He ranks third in the league in terms of QBR, behind only Prescott and Mahomes.

9. Deshaun Watson, Houston Texans: Six touchdowns to only one pick, a solid passer rating, and three rushing scores for the third-year Watson. However, he still takes too many sacks and needs to become more consistent.

10. Marcus Mariota, Tennessee Titans: Early in a make-or-break year, Mariota quietly has the seventh-best passer rating in the NFL. He takes too many sacks, but he’s yet to throw an interception. It’s been more good than bad.

11. Jacoby Brissett, Indianapolis Colts: Andrew Luck’s replacement is tied for the NFL lead with 10 touchdown passes, and his rate-based numbers are solid aside from an ugly 6.6 yards-per-attempt average. He’s been good, but he’s just not making enough plays to crack the top 10.

12. Jameis Winston, Tampa Bay Buccaneers: Winston still makes too many mistakes, but his 8.4 YPA ranks sixth among qualified passers, and he has a 113.5 passer rating ever since bombing in Week 1.

13. Jimmy Garoppolo, San Francisco 49ers: Only Mahomes and Prescott have higher yards-per-attempt averages than Garoppolo, who just needs to work on that 5-to-4 touchdown-to-pick ratio.

14. Matthew Stafford, Detroit Lions: He hasn’t been spectacular, but he’s been steady. The veteran is a top-10 passer with nine touchdowns to two picks and a solid 8.0 YPA for a team that’s competing every week.

15. Mason Rudolph, Pittsburgh Steelers: The second-year, third-round pick struggled immensely in his first start, but he was superb against Seattle and Cincinnati before and after that. Not sure it’s sustainable, but he’s made some big throw and has a triple-digit rating.

16. Tom Brady, New England Patriots: Even with limited support of late, Brady has a 7-to-1 touchdown-to-interception ratio for a 4-0 team. Still, he loses points for a 7.3 yards-per-attempt average, a 62.1 completion percentage, and a so-so passer rating of 97.5.

17. Aaron Rodgers, Green Bay Packers: Rodgers has just the one interception, and he’s had a few strong quarters. But for the most part, he’s been a game manager. That’s ridiculous considering his salary and his talent. He’s just not quite right.

18. Joe Flacco, Denver Broncos: The vet’s numbers are as average as they come, but the Broncos are 0-4. That counts.

20. Matt Ryan, Atlanta Falcons: The veteran has his moments, but with that level of support you have to be more consistent. He’s tied for the league lead with six interceptions and has a sub-par passer rating.

21. Carson Wentz, Philadelphia Eagles: Not sure Wentz is completely healthy, because he’s really lacked accuracy the last few weeks. He’s saved by a strong 9-to-2 touchdown-to-interception ratio, but that takes a ding when you’re averaging just 6.6 yards per attempt.

22. Jared Goff, Los Angeles Rams: The two-time Pro Bowler hasn’t been right for quite a while, and it’s really glaring when the rest of that offense isn’t as crisp as usual. Goff is tied for the league lead with six picks, and he ranks in the bottom 10 in terms of passer rating.

23. Kyler Murray, Arizona Cardinals: Murray hasn’t been as bad as his ugly numbers indicate, and a lack of support has been a factor. He gets credit for his legs and some clutch moments in Week 1, but that doesn’t get him out of the bottom 10.

24. Teddy Bridgewater, New Orleans Saints: He’s won both of his starts in place of Drew Brees, but the defense has carried New Orleans. Bridgewater is averaging just 6.1 yards per attempt, and doesn’t look like a realistic long-term option.

25. Baker Mayfield, Cleveland Browns: It’s been a rocky start for the sophomore No. 1 overall pick, but he does deserve credit for his 17 20-yard completions. Only four quarterbacks have more.

26. Josh Allen, Buffalo Bills: Even before suffering a concussion in Week 4, the second-year top-10 pick was disappointing. He’s the second-lowest rated qualified current starter in football, but he gets points for his work as a rusher (131 yards and three touchdowns).

27. Case Keenum, Washington Redskins: Mediocre numbers for a mediocre quarterback who probably shouldn’t be starting and will likely lose that job soon (if he hasn’t already). Not much else to say about Keenum.

28. Andy Dalton, Cincinnati Bengals: Four touchdowns to five picks, a bad completion percentage (61.4), an ugly rating (82.2), and only Murray has taken more sacks. We all know Dalton will never lead anybody to anything special.

29. Kirk Cousins, Minnesota Vikings: Cousins loads up in garbage time and against bad teams, but he’s complete garbage when it matters. He has a sub-90 passer rating and has thrown just three touchdown passes in four games.

30. Mitchell Trubisky, Chicago Bears: Could he be supplanted by injury replacement Chase Daniel? Trubisky struggled so mightily in the first few weeks of the season that the Bears coaching staff seemed to lose all trust in him. He’s completed just seven 20-yard passes this year, and his 5.5 yards-per-attempt average is the worst in the league.

31. Josh Rosen, Miami Dolphins: Rosen’s had no support and has been far better than his numbers, but those numbers are still so atrocious that we can’t rank anybody ahead of him. He ranks dead-last in the league in terms of completion percentage (51.2), touchdown-to-interception ratio (1-to-3), and passer rating (57.5) and it isn’t even close.