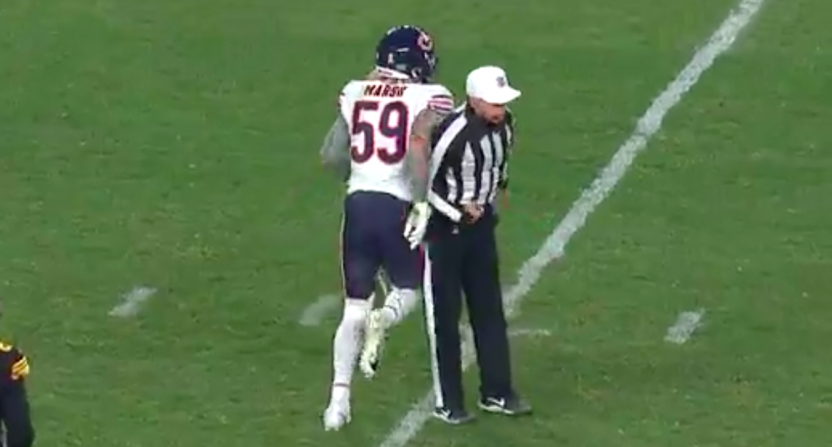 Complaining that the referees are taking an NFL game into their own hands and deciding the outcome is overdone and usually a bit dramatic. But on Monday Night, one NFL referee appeared to quite literally insert himself into the action to justify a taunting penalty at a critical moment in the game between the Pittsburgh Steelers and Chicago Bears.

With the Steelers leading the Bears 23-20 and less than five minutes remaining in the game, Bears linebacker Cassius Marsh sacked Ben Roethlisberger and stared over at the Pittsburgh sideline briefly before running towards his own. On his way, he ran close to referee Tony Corrente who appears to shift his body so that Marsh makes contact with him.

While it does look like Corrente already had his hand on the flag to call the taunting penalty, which gave the Steelers a fresh set of downs and a chance to extend their lead, it also seemed to many that he purposefully made contact with Marsh to justify the already iffy call.

NFL fans were united in their irateness and disdain for Corrente and the call.

Tony Corrente leaned into the contact and then held his flag toss like a walk off three pointer. What a joke pic.twitter.com/MhNlNVewJx

If the NFL has any guts, they'd suspend Tony Corrente after the game for tossing his hip into Marsh as Marsh came off the field. He completely initiated the contact and then threw his flag. #CHIvsPIT

Tony Corrente cannot make that taunting call. Unbelievably weak by Corrente's crew which has been awful tonight. An absolute gift to the Steelers.

Taunting the player he flagged for taunting. https://t.co/4FLdR0bzsc

Even when the Bears responded and scored a touchdown, to go up 27-26 with a little bit of time left, fans were already concerned about what Corrente might do next.

Bears might've left too much time for Tony Corrente

The Steelers did end up winning the game with a late field goal of their own, so it’s not like you can draw a line directly to the taunting call. However, there’s no doubt that it changed the trajectory of the end of the game. And there’s little doubt amongst NFL fans that Corrente needs to be disciplined or removed, although they’re also pretty sure neither will happen.